The Senators delight an intimate crowd at The Laughing Goat 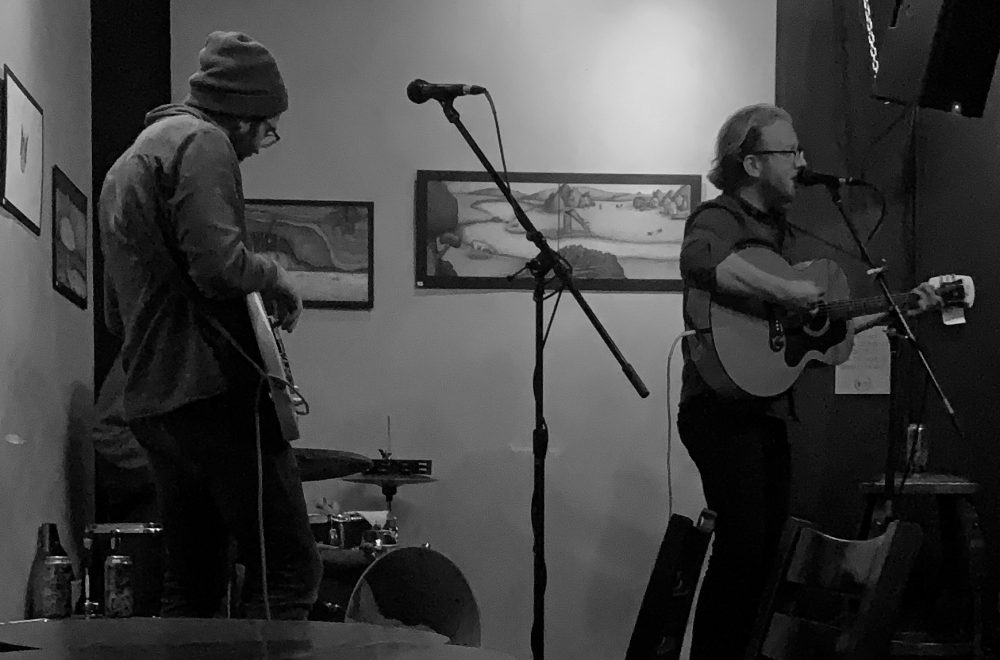 The Senators take the stage at The Laughing Goat. (Ben Berman/CU Independent)

On a snowy night in Boulder, folk-rockers The Senators brought raw and retro roots to Pearl Street’s Laughing Goat, in their first of many performances in Colorado on Feb. 5. (The CU Independent‘s interview with the band can be found here).

On the cafe’s small stage, the band performed for the two dozen cafe-goers, seeking to escape the cold through live music. The Senators delivered, bringing a warm energy to The Laughing Goat and proving their staying power in the Southwestern folk scene.

The Phoenix-natives, known for their work in the folk music scene, channeled the dynamic vocal energy of Bob Dylan and the laid-back, acoustic ambiance of The Lumineers in the night’s performance to put their unique spin on the genre.

Their performance of “Dear Dear,” one of the first songs played, was one of the night’s highlights, a tune performed only with an acoustic guitar and shaking percussions to a slower tempo. With this simple arrangement, lead singer and guitarist Jesse Teer’s vocals stood out, filling the whole room as the heart of the song.

“We recorded this one on a porch. Obviously, that couldn’t hold all the stuff we usually play with,” Teer said as he strummed softly on his guitar. “So, sometimes when the production is stripped back, it’s better than if I did it myself.”

Teer channeled this old-school energy through a solo rendition of Bob Dylan’s “Knockin’ On Heaven’s Door,” using only his acoustic guitar.

With his calming stage presence, Teer’s demeanor carried The Senators’ performance, engaging each member of the crowd before him. He quickly established a conversational familiarity with his audience, often peering around The Laughing Goat from onstage, taking note of the environment he played in and thanking individual audience members for their time.

“This one is about driving from the Midwest to the Southwest for the first time,” Teer said before jumping into the ambient “Indiana,” a song yet to be officially released.

The Senators introduced many of these folk tunes with anecdotal descriptions, including stories of their travels from Arizona to Colorado, trains that ran through Phoenix and the hot summer rain that annoyed them. Between songs, bassist Quinn Scully remarked that he had “tried Shake Shack for the first time” that day. These were experiences about real people and real places, giving a personal touch of authenticity to every lyric sung by Teer and Scully.

Many of their songs incorporated the idea of geography, the outdoors and the simple joys of exploration, most notably their soulful “Wild Wide Open,” a single from their upcoming album. This aura of wanderlust, paired with the rustic charm of The Laughing Goat, gave the performance a relaxed feeling that the largest of venues could not provide.

After the show, the band set aside their instruments to engage with the small crowd taking the time to chat one-on-one with cafégoers as the café closed for the night.

There was no backing track, no rigid setlist and no frills. The Senators’ night at The Laughing Goat highlighted the authenticity of live music at a local venue, thanks to three musicians expressing their love for the craft.