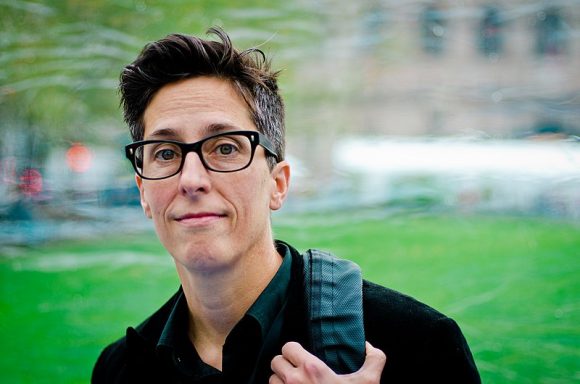 On Thursday, Nov. 17, the University of Colorado Boulder’s Cultural Events Board held a conversation and book signing with author and cartoonist Alison Bechdel at the University Memorial Center.

Bechdel is best known for her best-selling graphic memoir “Fun Home: A Family Tragicomic” which has since been adapted into a Tony Award-winning musical. She’s written two novels since then: “Are You My Mother” and “The Secret to Superhuman Strength.” Both have been met with critical acclaim.

Bechdel first visited Boulder in 1987 when she was invited by the publication group The Lesbian Collective to give a talk similar to the recent one at CU Boulder. At the time, Bechdel was best known for her weekly comic strip, “Dykes to Watch Out For.”

For the cartoonist, the goal of the comic strip was to show the lives of lesbians from an insider’s perspective.

“I wanted to tell the truth, to be honest and open,” Bechdel said. “I didn’t see us reflected anywhere in the culture.”

Bechdel came out as a lesbian in college in the 1980s. She described the experience as both a coming of age and an entrance into political consciousness.

“I had been a clueless white middle-class kid,” she said, “but all of a sudden, once I realized I was a lesbian, I found myself on the outside.”

Suddenly, Bechdel was witnessing the mechanics of oppression which fueled her activism in the 80s. It was through her comic strip that the author first described the now-famous Bechdel Test. Used to measure the representation of women in film, the test requires two (named) female characters to talk to each other about something that isn’t a man at any point throughout the film. Even though the test was conceived 37 years ago, a 2022 study of the highest-grossing films of the past 40 years revealed that only half passed it.

Bechdel stopped producing “Dykes To Watch Out For” in 2008 after the queer community gained more political and social equality. Bechdel said that the comic strip “no longer felt as vital and necessary as it once did.”

Instead, the author turned inward and published “Fun Home,” the novel that launched her into the mainstream.

“Telling this story was something I had wanted to do for a very long time, but it felt impossible,” she said.

“Fun Home” is about Bechdel’s relationship with her family, especially the impact of her father’s suicide upon it. The author depicts her childhood in rural Pennsylvania, her experience coming out to her parents and the revelation of her father’s homosexuality following his death.

“What I hadn’t realized going into this project was how much it would force me to come to understand both my parents better,” Bechdel said. “I was able to understand what had seemed like my private, senseless tragedy was part of something bigger. It wasn’t just our sordid family secret, it was something connected to these larger societal forces.”

Bechdel’s belief that the personal and political are inextricably linked has only been reinforced by the multiple attempts to ban the book across the country. A school board meeting in Kansas City, Missouri most recently made such an attempt. Those in favor of banning the book argued that the content was obscene. One member, Ryan Utterback, went so far as to argue that providing the book to a child would amount to “solicitation of a minor.” Four months after the meeting, Utterback was arrested on suspicion of child molestation.

Vi Burlow, a Ph.D. student at CU Boulder and comic historian explained that comics are more frequently targeted by book bans because they are so accessible.

“The combination of accessibility and progressive rhetoric makes them particularly susceptible to censorship,” Burlow said. “Layer queer writing on top of that, and you’ve got a rather prime target for anti-queer, anti-comic, anti-progressive rhetoric.”

The queer themes discussed in “Fun Home” have drawn criticism that the novel is too inappropriate for teenage audiences.

“It’s far too easy for someone who is uncomfortable with queer rhetoric to say it is ‘inappropriate’ and argue that literature should be ‘sound” and “wholesome,'” Burlow said. “As soon as something is deemed inappropriate, it’s easier to stop asking questions about why that may be and start banning it instead.”

Bechdel ended the talk with a discussion of her latest book, “The Secret to Superhuman Strength.” This novel focuses on the author’s relationship with physical exercise and how the various athletic disciplines she has pursued throughout her life have become part of her quest for transcendence.

Bechdel’s earlier work focused primarily on her self-discovery. Now, however, the author has started to ask what it even means to have a self.

“Once you start asking that question, you’re really well on your way toward understanding that the self is something that can and should be let go of,” Bechdel said. “This recent book is about my effort to get to that next stage of forgetting the self, which means being with others, this understanding that we’re part of a larger whole. It’s a very progressive vision.”

Hannah Chavez, a junior at CU Boulder, said she found Bechdel’s talk to be at once informative, relatable and moving.

“I really enjoyed going through her artistic process and what influenced her as a writer,” Chavez said. “I appreciated the personal aspects of the talk too, especially as it realities to me so much as a lesbian.”

Burlow, who also attended the talk, believes that it is readers’ ability to identify shared experiences in personal narratives that has allowed Bechdel’s work to resonate so widely.

“While we can’t assume that every person from any one group has a ‘universal experience,'” Burlow said. “We can find solace and, sometimes, a better understanding of our own selves when we watch someone else go through the process. I think this is how Bechdel manages to take a personal story and make it feel applicable to so many.”

Editors Note: A previous version of this article incorrectly stated the event was held on September 20. It was held on November 17. The article has since been updated.