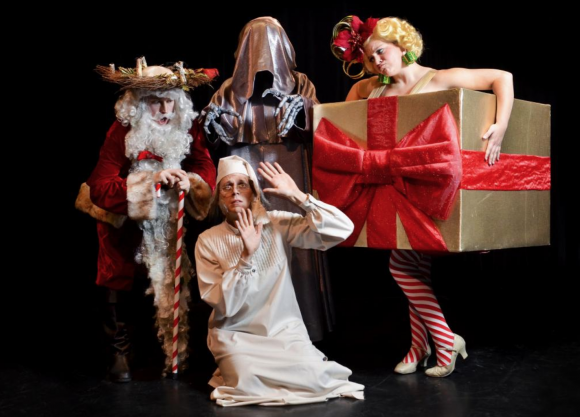 Actors on set during production of “A Broadway Christmas Carol.” (Photo courtesy of University of Colorado)

“A Broadway Christmas Carol,” an irreverent take on the Charles Dickens classic, opened for its 2019 season at the University Theater Nov. 15 on the University of Colorado Boulder campus. The production highlights facetious caricatures and lively dancing.

The show, which first debuted at CU in 2014, features 33 song parodies of famous Broadway songs from “Annie,” “Wicked,” “Chicago” and “Phantom of the Opera.” Surrounded by a singing and dancing ensemble cast, the cranky Ebenezer Scrooge is swept away by the joyful Christmas spirit.

Costume designers Katie Lennon and Mimi Kuntz created brilliantly ostentatious outfits, cringeworthy yet pleasing in their gaudiness. Each scene contained new costumes from zebra tights and black diamond-patterned shorts for Marley’s “Too Much On Your Mind,” to an enormous white ball gown with vermillion bows and lights in “We Need a Little Christmas” that engulfed a quarter of the stage. A compilation of terrible Christmas sweaters for party guests could be seen in “Duck, Duck, Goose.” The costumes transformed the original haunting ghosts into preposterous figures: Christmas Past, a slender Santa with a floor-length, dilapidated, carpet-like beard; Christmas Present, an oversized, waddling present and Christmas Future, a menacing, silent Phantom of the Opera complete with a playful candy cane and undersized slay.

Lead Kyle Lawrence portrayed a sprightly version of Scrooge in his 60s. In the performances first half, Lawrence lacked Scrooge’s trademark gravitas, bitterness and vitriol. At most, he appeared annoyed, more like an irritated elderly man than an aged, decrepit “ba humbug”-er. Despite a toned-down character, Lawrence delivered strong vocals notably in his solos of “So Long, Farewell” and “Look at that Face.” Valiantly trying to emulate Idina Menzel’s belt, in a rendition of “Defying Gravity,” Lawrence pushed his voice to the limit, reaching for the sparkling high notes.

Leaping nimbly across the stage, Eric Gaydon, who played Scrooge’s nephew Fred, showed his consummate dancing. In the first scene, Gaydon sang “Put On a Happy Face,” in which he attempted to coax Scrooge into the Christmas spirit, accompanied by elegant turns and superb tap dancing. Gaydon’s dancing appeared effortless, and he never sounded out of breath, despite the flowing, intricate movements.

The show’s high point was Christmas Past’s scene, performed by Kees Nachbahr, with his hilarious take on “Try To Remember.” Nachbahr emerged from a cut-out door, squatting and regarding the audience with confused interest, his absurdly long beard with bows swaying side to side. He never seemed rushed, sluggishly shuffling towards the front of the stage with a goofy grin on his face, a crown of branches perched perilously on his wig. Committed fully to the ridiculousness, Nachbahr never faltered, creating an entertaining, comical version of Christmas Past.

Scrooge’s transformation at the end of the first half, following the three ghosts’ visits, was delightful and inspiring. Lawrence’s even-keel temperament seemed more suited to the happy Scrooge, building in effusive excitement as the second half progressed. The ensemble’s closing numbers, “You Will Be Found” and “Today Is Our Great New Day,” filled the stage with carefree rejoicing, sending the audience off with the heartwarming happy ending of hope and redemption in the true Christmas spirit.

“A Broadway Christmas Carol” runs from Nov. 15 to Dec. 8. More information can be found here.