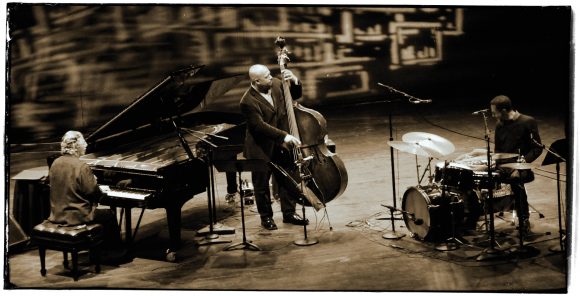 All seasoned performers, Corea, McBride and Blade are towering figures in the jazz world. Corea played with Miles Davis in the 1960s and 70s. He is the fourth most Grammy-nominated artist, with 63 nominations and 22 wins. Originally a classical musician, McBride left The Julliard School in New York to perform jazz professionally. He has won four Grammys and earned critical acclaim for his big band the Christian McBride Band. Blade released three albums with Brian Blade and The Fellowships Band and has performed with icons such as Bob Dylan and Joni Mitchell.

Wednesday’s show opened with selections from their newest album, including “Crepuscule with Nellie” and “Work” by Thelonius Monk, one of Corea’s greatest inspirations.

McBride showed his chops first with long solos, a groove living inside him, escaping through his fingers. His left hand glided up and down the neck, quick scales and unexpected syncopations flowing easily, a smile on his lips as he improvised. McBride’s interplay with Corea created polyphonic improvisations with diverging and converging melodies, alternating between dissonant conflict and echoing calls and responses.

Rocking his head gently, Blade swayed in time to the music, alternating light taps with building rolls that came out of the silence. He tapped each drum softly, his smoky, understated style melting into the bass’ low whisper and light piano.

Corea’s style lacked the freedom and ease shown by McBride and Blade. He played jazz like a careful, classical pianist. His style was restrained and rarely expressive, his body still as his fingers rested heavily on the keys. Every movement seemed deliberate, calculated and thoughtful, the opposite of the other musicians’ uninhibited, flowing motions.

Halfway through the concert, Corea decided to skip the intermission, joking the piano did not need to be retuned. Then he jumped into the quasi-second half with a cross-genre three-song set, which he described as an improvised call to Domenico Scarlatti (affectionally called “Dom”), “one of Scarlatti’s 550 sonatas,” and Corea’s own composition “A Spanish Song.”

Plucking the strings from the inside of the piano, Corea created a tinny, harpsichord sound, while McBride scratched haphazardly at the upright bass with his bow. The uptight, rhythmic Scarlatti sonata became easy and loose with Corea’s added embellishments, and the syncopated high-hat and walking bassline made its character undeniably jazzy.

The final song in the set was Corea’s “Fingerprint,” inspired by Wayne Shorter’s “Footprint.” It transformed the acoustic, laid-back style into an energetic groove. Blade introduced his first driving beat, creating a dense, thick, polyrhythmic texture in his solos as Corea and McBride watched.

The trio’s encore return slid back to their laid-back style. Corea created catchy melodic fragments, leading an extended audience call and response, inviting them to experience the playful freedom of improvisation.