Moon Boots attempts to tap into house scene in Boulder 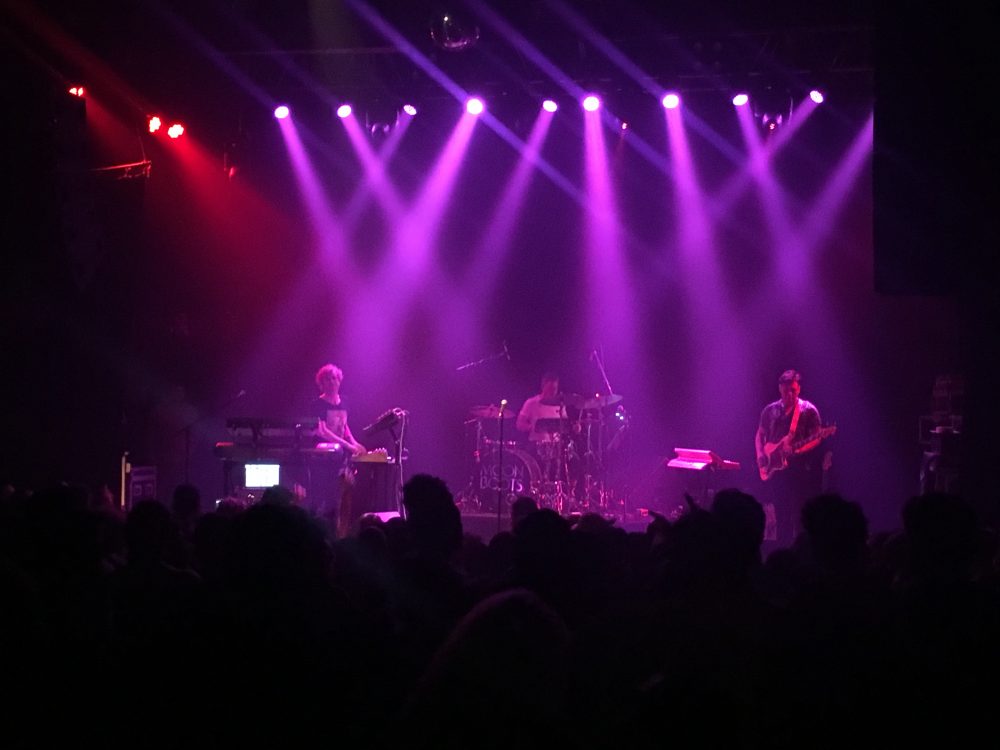 American DJ and music producer Peter Dougherty, known by his stage name Moon Boots, played at Boulder’s Fox Theater Tuesday for what became an evening of house renditions. Playing each song live with a full band, Moon Boots showed that there may be some potential for house music in Colorado, just not in the traditional manner.

Typically blanketed by the EDM umbrella, house music has been publically reserved for the unsolicited underground spheres and sought after techno clubs of Denver.  Boulder lacks a venue and enough of an audience to satisfy IDM shows or even classic house shows for that matter.

At Tuesday’s show, Moon Boots performed all of his arrangements with two musicians at his side. Each instrument took on the role of what could have easily been a software instrument. Midi drum triggers as well as launchpads allowed for sampled kick and snare drums to overlay throughout. Backing all of the songs was the iconoclastic Juno 106 keyboard synthesizer, a staple of groundbreaking house and techno.

Moon Boots made a name for himself as a DJ playing gigs in Chicago. He eventually built up enough credibility to play iconic venues such as Smart Bar. Under the Moon Boots alias, Doughtery has played electronic music festivals and has hundreds of Boiler Room style DJ sets on Youtube. No stranger to house music, Dougherty is fearless about stepping outside the boundaries. On Sept. 6, Moon Boots released his second full-length album “Bimini Road” which brings up mythical ties to the lost city of Atlantis, in which a possible road to the city was discovered.

Dougherty’s live show proved a testament to the many different subsections of house music. The show was not genre-defining or groundbreaking by any means but did make a valiant attempt at integrating house music into the Boulder scene. Moon Boots played classic house tracks ranging from Detroit inspired techno beats to Italo house, in which piano chord progressions are played over that same four-four foundation.

A positive of hearing live renditions of house tracks is the affordance to isolate each individual instrument with visual queues. Dougherty was seen dancing behind his synth rack while playing classic arpeggiations throughout the show. He created soundscapes only present in true space disco and took them even further by blending in elements of RNB. On the track “I Want Your Attention,” Space Disco inspired arp leads blanketed the band while basslines similar to electronic duo Disclosure’s were played on a Moog Mini.

However, the lack of exposure can prove to be problematic as seen in Moon Boots’ support acts. The second opener of the evening, STRNO, succeeded at broadening horizons but missed the mark when he figured out how to use the high and low pass filters on his mixer. STRNO’s struggled to capture an authentic house sound and was quickly degraded into EDM builds and abrupt drops leading to aggressive samples that did not fit the catalog. STRNO proved to be surface level but still featured arrangements by modern house greats such as German producer Anja Schneider.

Genre-blending aside, Moon Boots serves as a unique case study into the popularity of house music in Colorado. Ultimately, house in places of unpopularity creates opportunities to produce music that falls in between boundaries. Moon Boots captured this and was able to captivate an audience that may not have had previous exposure to the musical style.

Moon Boots is currently on tour and is set to appear in Santa Fe, New Mexico on Thursday. More information and upcoming dates can be found here.