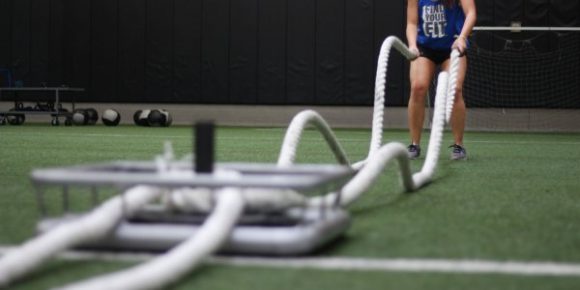 What if you were told that you could potentially become a star athlete by sitting down for five minutes? An ongoing study happening at the University of Colorado Boulder may have that answer.

“It’s called inspiratory muscle strength training (IMST) — it takes about five minutes a day and in certain populations of people with obstructive sleep apnea, it has been shown to lower blood pressure,” said Dr. Daniel Craighead, a postdoctoral fellow in the integrative physiology department at CU who is heading a study involving this machine which began in October 2017.

The five-minute training involves taking 30 breaths into an IMST device which provides resistance to one’s breath. One may feel “a little bit light-headed,” said Erzsebet Nagy, a graduate student working on the study.

The CU study currently in progress involves healthy middle-aged adults practicing this exercise over the course of six weeks to see whether this machine can improve their overall health and be used in a preventative way.

“Blood pressure is a risk for cardiovascular disease, which is the number one cause of death for Americans,” Craighead said. “Now we’re seeing if we do this in otherwise healthy middle-aged and older adults, will it lower their blood pressure, will it improve the health of their blood vessels and then hopefully that would make them live healthier lives?”

Early results of the study have shown promise — the blood pressure levels recorded in the participants are noticeably lower since they began using the IMST machine daily.

“People say they really feel a benefit,” Craighead said. “One person told me they felt a lot easier walking up multiple flights of stairs to where they live. Other people have told me they feel more clear-headed, so subjectively everyone seems to enjoy it.”

Craighead does note, however, that some people may be falling under a placebo effect since there are “sham subjects” who participate in the study and breathe into the machine at a lower resistance than the other participants. Craighead himself says he does not know which participants are the “sham subjects.”

Even with a potential placebo effect in play, the study shows potential benefits in other areas such as motor function, cognitive function, overall exercise tolerance and oxygen uptake. This kind of workout shows another potential perk: helping people adjust to high altitudes.

Stephanie Zuniga, a CU student originally from California, plays on the Division I women’s soccer team. Each summer, she follows the workout packet given to her by her coach, though this is often not enough to prepare her for practices at high altitude.

“I felt like I couldn’t breathe,” Zuniga said. “There’s moments where we did our track workouts, and I would throw up … I was wondering ‘why do I feel like I’m so out of shape?’ and it was because of the altitude.”

It takes three to six weeks on average for someone to acclimate to the high altitude. While the athletic department does not use this machine or any technology to help their athletes acclimate, Zuniga thinks that maybe something like this could help.

This type of machine is sold commercially for $40-$500. IMST technology is also used by some athletes, mostly runners and cyclists, as an ergonomic aid. Craighead himself incorporates the machine into his workout since he is training for a marathon.

“A lot of the research with this has been done in athletics,” Craighead said. “The main difference … is the duration. We do 30 breaths. A lot of people do this at a much lower resistance but for 30 minutes at a time, so what we think is that this short period is more adherable, and it would potentially be beneficial for athletic performance.”

The goal of the study, which is now halfway complete, is to have 40 participants by the end of the year and gain a better idea about which populations this kind of technology could help, whether it be older adults or student-athletes trying to get used to the mile-high state.