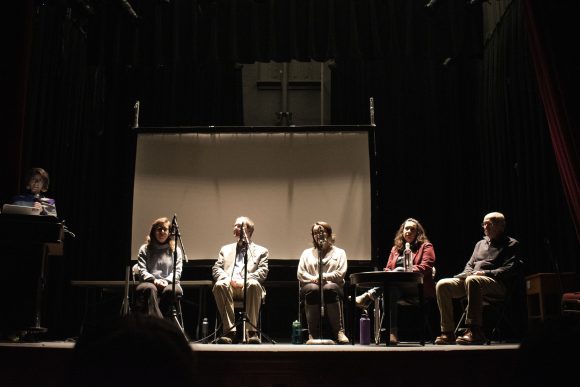 Dozens of Boulder community members attended an event hosted by the university on Wednesday, Nov. 30, in the Old Main Chapel.

The panel, “Woman, Life, Freedom: Supporting the Iranian Women’s Revolution,” featured discussion from local elected officials and CU Boulder professors about how the community could take action in response to the movement in Iran.

The Iranian women’s revolution, which calls for more women’s rights and a regime change, was sparked by the death of Mahsa Amini, a Kurdish-Iranian woman who died in police custody after Iranian morality police arrested her for wearing her hijab improperly.

Young Iranian women and their allies have taken to the streets in protest, where police responded with violence. An estimated 451 protesters, many of them under 18, have been killed. More than an estimated 18,000 have been detained, including many university students.

Student groups within the university’s law school have taken action by writing a statement in support of the movement in hopes of spreading awareness.

“When added to the resistance of Iranians inside Iran, particularly Iran’s university students, our external support can help the cracks in the regime expand,” said host Shideh Dashti, the acting associate dean for research in the College of Engineering and Applied Science.

In cities across the world, including Denver, people have gathered to march and protest to support Iranian women.

University community members also showed interest in supporting the movement. After an overwhelming response to a small panel about the movement on Oct. 20, university faculty decided to host a larger event.

Wednesday’s event drew attention from local and state government officials, including Colorado Gov. Jared Polis, who opened the panel with a statement.

“Tonight we come together to let the people of Iran know that they are not alone,” Polis said. “The state of Colorado is proud to stand in solidarity with all those across the world who aspire to freedom to live their own lives, including the brave men and women who’ve taken to the streets of Iran.”

The panelists encouraged audience members to participate in local government by voicing their support for the movement in city council open comment sections or writing letters to elected officials.

“I’d love to see proclamations coming out of every city across the Front Range on this important topic, but in order for us to make those moves, we need to hear from the community,” Shahrezaei said. “I share [about the movement] because I’m an Iranian American on the dais, but that has to be a shared value across the community.”

“If you had any sort of feelings in the Roe v. Wade decisions that we saw coming out of the Supreme Court, these things are connected,” she said. “Our rights as women here in America are tied to our sisters in Iran.”

Panelists agreed that activism in partnership with Iranians and Iranian Americans is important.

“We need to be the ones listening and supporting, not directing or telling Iranian women what they should be doing or what we think they should do,” Fluri said. “They know much better than we do.”

“The people have put themselves at risk to get that information to us and the very least that we can do is watch and share,” Shahrezaei said.

CU Boulder Law School students who put out the statement agreed that sharing information amplifies Iranian voices. Earlier in the month, they said the increased attention puts important pressure on the Iranian government.

“It’s not like we can go join their protests. That’s not an option,” said Nicole Ela, a first-year law student and the diversity, equity and inclusion chair within the Women’s Law Caucus. “What is an option is to at least share media about [the movement].”

Students decided to draft the statement after Law School Dean Lolita Buckner Inniss denied a request to put out a statement. Inniss declined to comment when approached by the CU Independent.

“We as student organizations felt like we want to acknowledge what’s happening and show some support for the people [in Iran],” Ela said.

The statement is only a beginning, according to Ela. Students within the law school hope to continue spreading awareness and support for the movement.

“Symbolic gestures are important. Symbolism matters,” Fluri said. “Showing support really can go a long way for people who are in the thick of fighting quite literally for their lives.”