Campus protest scheduled for Monday after student charged with rape 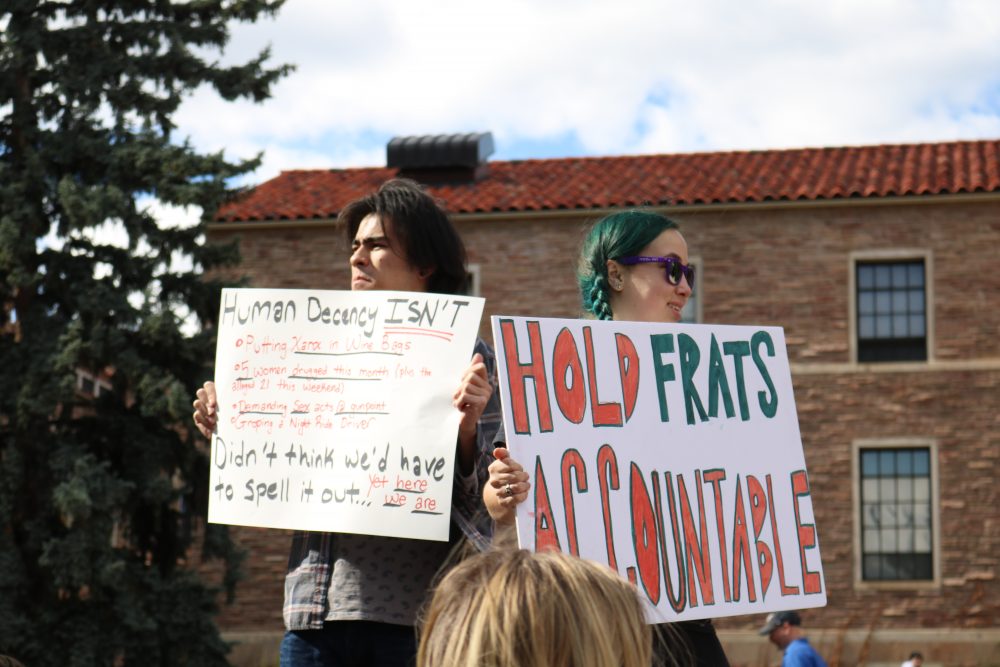 Students protest at the University Memorial Center calling out fraternities and rape culture. The drugging of two women is rumored to have occurred at fraternity houses on University Hill. Oct. 25, 2018. (Lucy Haggard/CU Independent)

In wake of the arrest of a University of Colorado student for sexually assaulting a fellow student, a protest has been planned for Monday to criticize the university’s handling of campus sexual assault.

Zachary Orion Roper was arrested last week on charges of raping a female CU student who was his date at a sorority event. He was charged with two counts of felony sexual assault and released on bond. A hearing is scheduled for April 4.

“We want to demand the university takes some sort of action,” said Kat Stanley, one of the organizers of the protest.

Stanley, who helped organize a protest last semester after several sexual assaults on campus and on The Hill, said she “was really outraged” after reading news of the assault and wanted to do something.

The protesters will call on the university to suspend Roper until his trial and expel him if he is found guilty. Stanley said that they are asking for this because they feel that allowing abusers to remain on campus creates an unsafe environment for their victims, and can interfere with their ability to obtain an education.

“I don’t want students to fear seeing their abuser on campus,” Stanley said. “I don’t want this girl or any girl to feel unsafe [at CU].”

Megan Ferreira, who is co-coordinating the protest with Stanley, also helped lead a meeting in February to discuss how the university can hold perpetrators of sexual violence accountable.

Deborah Mendez-Wilson, a spokesperson for the university, said that CU is investigating the allegations that were reported in the case through the university’s Office of Institutional Equity and Compliance.

“It is critical that students know the university has an established process for reviewing, investigating and taking action on all reported cases of sexual assault.,” Menendez-Wilson said via email. “If a student is found responsible, sanctions for sexual misconduct include suspension or expulsion, depending on the severity of the case.”

According to their Uber driver, Roper changed the destination address from the sorority house to his apartment. When the sorority member did not arrive at the house at the expected time, several fellow sorority members became concerned. They went to Roper’s apartment with his roommate and found him sexually assaulting her.

According to the records, Roper told the Uber driver that he was in a fraternity, but Marc Stine, CU’s Greek advocate for the Interfraternity Council, said that Roper is not a member of any of the 22 fraternities affiliated with the IFC. Roper registered to rush this fall as a sophomore but was not offered a bid by any of the fraternities.

It is not known at this time whether he is a member of one of the three fraternities that are registered student organizations, or Kappa Sigma or Sigma Pi, which are not affiliated with the IFC or CU.

“I read this story and that’s just deplorable,” Stine said of the assault. Stine praised the sorority for how well-organized they were in reacting to the situation.

“If the sorority called for the Uber to take their sister back to the sorority house and they had somebody at the sorority house notified to watch for her, that’s great safety,” Stine said. “And it probably never crossed their mind that her date went with her. It may not have crossed my mind. Certainly, this will be a topic of discussion at the next IFC meeting, if you’re sending somebody somewhere in an Uber how to see that they are safely escorted.”

A spokesperson for the sorority involved in the incident has yet to respond to a request for comment.

The protest is scheduled for noon on Monday at the UMC fountains and will feature several speakers and an open mic.