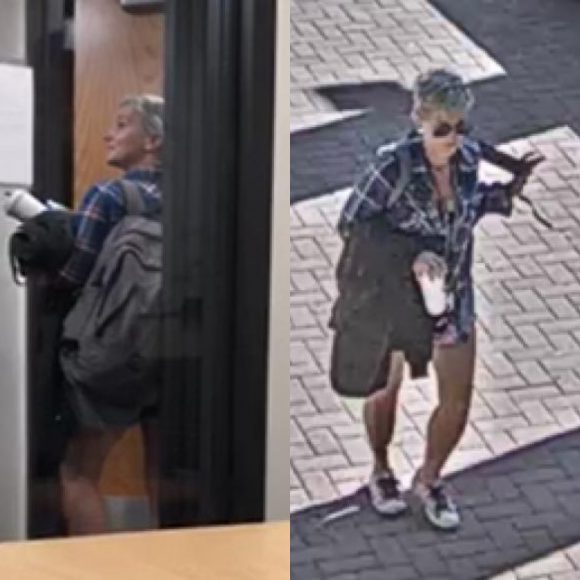 Left: The woman who appears in the video calling a student the N-word. Right: The suspected same woman on campus last month. (Photo courtesy of University of Colorado Boulder Police Department)

This story has been updated to reflect new information about the woman as well as statements from CU students, campus organizations and administration.

The person filming is a white student and the other person in the video is black, said Yene Már, a student who said he is a friend of the man who took the video.

Social media posts indicate that the two people in the video are CU students and that the incident took place in a study room in the Engineering Center Sunday afternoon.

In the video, the woman twice calls the black student the N-word and said he was stalking her. She is then approached by Eric Rozner, an assistant professor of computer science, who attempts to get the woman to leave while saying he will call campus police.

Rozner retweeted the video on Twitter saying he hopes to “raise awareness of racism, which unfortunately still exists today even on college campuses in liberal cities.”

“On the fly, my intuition was to separate, deescalate and then check on the students,” Rozner said. “I have to regrettably say that I did not call campus police immediately afterwards (although I have since spoken).”

Several students and campus groups have since condemned the woman’s language.

“Being black is neither a crime, nor should it (constitute) a threat. Our students deserve to have spaces that are conducive to their learning and that are not interrupted by racists,” wrote Karia White on the Black Student Alliance Facebook page along with a link to the video.

BSA spokesperson Kolondja Thillot said in a statement to the CU Independent, “An attack on one of us is an attack on all of us.”

“It seems a thought there is a disconnect from CU Boulder’s campus-wide statements of diversity and inclusion and the actual practice and execution in the spirit of these statements,” Thillot said. “The demands of our organization have been clearly articulated to campus administrators. We have given the school 48 hours to address and conclude their investigation to meet our demands.”

Tanya Ennis, director of CU’s BOLD Center, said in a statement that campus leadership is aware of the incident and continue to address it.

“BOLD Center and college staff are collaborating and taking and taking this incident and the investigation very seriously,” Ennis said.

CU President Mark Kennedy said in a tweet Sunday, “I understand a verbal altercation occurred at CU Boulder between students that included racially hostile language.” Kennedy said further information will come in the next few days.

“I want to be clear in unequivocally condemning racist and threatening behaviors,” Kennedy said.

The University of Colorado Boulder Police Department issued a statement Monday asking for help in locating the woman. According to CUPD she is a white female, approximately 5 feet 3 inches to 5 feet 5 inches tall and 130 to 140 pounds, with short blond hair. CUPD does not believe she is a student or affiliated with CU Boulder and believes she is the same woman found camping on campus last month in violation of CU policy.

On Monday CU Boulder Chancellor Philip DiStefano released a campus-wide statement saying, “While we don’t believe (the woman) is affiliated with our campus, her actions are just as insulting to our values.”

“I cannot state this strongly enough—racist behavior is offensive to our campus values and will not be tolerated,” DiStefano said. “We are working with campus and student leaders to prioritize next steps to address yesterday’s incident and improve upon our policies, trainings and resources for our campus community to reject intolerance and racism wherever they exist.”

This story will be updated as more information becomes available.