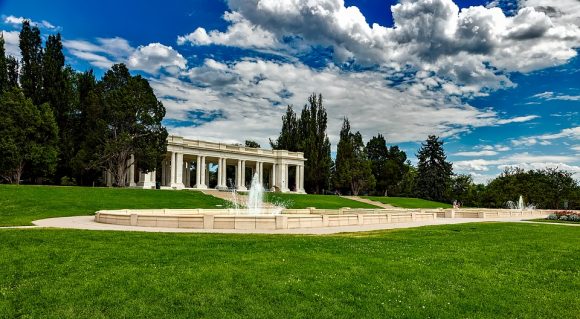 Cheesman Park, located in central Denver, is a beautiful urban park with an elegant marble memorial, ornate gardens and large grassy fields. Despite the beauty that is now Cheesman Park, this land has a rather sinister history. While sitting in the fields, you could unknowingly be above the grave of one of 2,000 bodies that remain buried underneath the park.

According to local legend, there is said to be an overwhelming and unexplained sadness surrounding the area, due to the restless souls roaming the grounds.

General William Larimer had high hopes for his newly established town, wanting to create a respectful and exquisite resting place for the influential and wealthy residents of Denver. In 1858, Larimer set aside 320 acres to construct the Mount Prospect Cemetery. The hill was reserved for these respected people while the outskirts were meant for criminals and the poor — which quickly became the majority of the cemetery’s population.

The second man to be buried in the cemetery is often said to be the first, as his scandalous death makes for a much more interesting story. John Stoefel, a Hungarian immigrant, supposedly came to Denver to settle a dispute between him and his brother-in-law which resulted in him shooting the man and being convicted for murder. He was publicly hanged on April 9, 1859. Both he and his brother-in-law’s bodies were carelessly thrown into the same grave at the edge of the cemetery.

Mt. Prospect gained many nicknames over the next few years as the graveyard’s edges began to fill with bandits and impoverished. The cemetery started to decline and never quite became the respectful place Larimer intended it to be. As Larimer left Denver, the cemetery was claimed by John Walley, who neglected the cemetery for years. With toppling headstones and vandalized graves, the cemetery continued into a state of deterioration before the land was declared federal property and was purchased by the City of Denver.

Over the next two decades, the cemetery was sectioned into various religious and ethnic groups, some of which maintained the cemetery very nicely. Meanwhile, the graves of criminals and unclaimed bodies rotted under the overgrown, deserted grounds. A “pest house” was established just south of the cemetery where terminally ill patients were left to die. The majority of these diseased people were buried in mass graves in the bordering section of the graveyard.

On Jan. 25, 1890, in light of the ugliness that Mt. Prospect had become, the area was officially renamed Congress Park. Plans for the transformation from a cemetery to park began shortly thereafter. Families were given 90 days to relocate their loved ones, yet the majority of the bodies in the cemetery were unidentified criminals and vagrants who had nobody to claim them.

In 1893, E.P. McGovern was contracted with digging up the remains of the unclaimed bodies and respectfully transferring them into new coffins which would then be shipped to another local cemetery. However, child-sized coffins were much cheaper, so McGovern, looking to turn a profit, began hacking up the remains of these bodies and cramming them into the small boxes. Sometimes multiple boxes would be used for one body. Body parts were scattered everywhere and the curious bystanders began to loot the open graves at night.

Once the health commissioner realized the atrocities being conducted, the transfer of these bodies was shut down. Unfortunately, that left many of the graves open for about a year before the construction of the park began. But despite the development of the park, the rest of the bodies were never removed; it was decided to fill the graves and build over them. Many believe the brutal dismemberment, as well as the forgotten graves underneath the park, have caused the spirits of the deceased to wander in what is now called Cheesman Park, as well as in the surrounding neighborhoods.

One night, a man and his friend decided to take a walk through the park. As they continued toward the grassy fields, the man started to hear rattling chains behind him, yet his friend heard nothing. As they sat down to have a smoke, they noticed a child on a bike with chains dangling from his pockets circling a man with tattered hospital clothing, obvious blood stains and a broken jaw.

The mysterious man approached them, asking for a cigarette, when he began to show off his multiple stab wounds and asked if the pair had seen who did it. They told him no, and the pale bloody man walked away into the darkness.