Fraternizing with the Enemy: Notes on the Arizona Wildcats 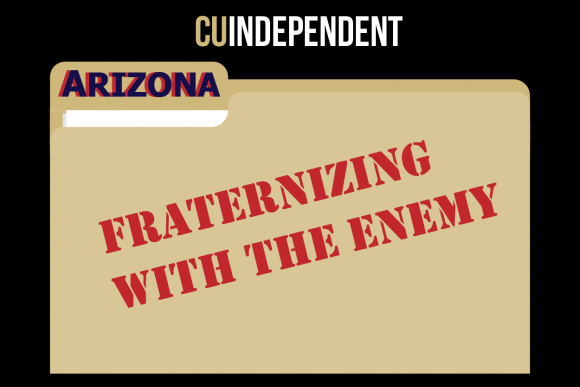 Fraternizing with the Enemy is a weekly segment in which the CU Independent reaches out to the football beat writer of the Buffaloes’ opponent’s student newspaper. This week, Head Sports Editor Justin Guerriero chatted with Nathan Skinner, football analyst for Arizona’s Daily Wildcat, to gather some information about UA.

Justin Guerriero: Arizona thus far has had two blowout wins, a tough loss vs.
Houston and a valiant effort vs. the Utah Utes that came up short. Overall, how are you gauging this Wildcats squad in the sample size that you’ve been able to observe?

Nathan Skinner:  The UA squad is extremely young. There are over sixty redshirt and true freshmen on the roster. Inconsistency has been a constant theme; the players are talented but lack experience. Offensively, the Cats’ strength is in the backfield, with tailbacks J.J. Taylor and Nick Wilson.

Quarterback Brandon Dawkins is a strong runner but lacks pocket awareness. Shun Brown is a game-breaker at receiver [and] he thrives in space. Brown is a strong returner. He has two touchdown returns so far this season, including one against UTEP that was a Sportscenter Top 10 selection.

Defensively, Demetrius Flannigan-Fowles is the best of the bunch. He’s a ball-hawking safety that was named the Pac-12’s best pass defending safety during Pac-12 Media Days. Dane Cruikshank, a physical corner, joins Fowles in the secondary. On the defensive line, there is a lack of heft, so look for the linebackers to team with the front on passing downs to create pressure.

When one looks at this team, they are a year or two away [from doing big things]. Unfortunately, head coach Rich Rodriguez may not survive that long. The recruiting in Tucson has been sub-par over the last two years [and] he has failed to capitalize on the momentum gained in the 2015 season.

JG: The Buffaloes have struggled to put pressure on enemy quarterbacks but have solid linebackers and a secondary that has been performing well despite some new faces at the defensive back position. How can the Wildcats succeed offensively versus Colorado?

NS:  The Cats can succeed by pounding the football, for they are a one-dimensional team. Dawkins struggles with placing accurate passes, but is a deadly runner. Along with Taylor and Wilson, they form a dynamic trio in the backfield.

Arizona will also look to create matchups with wide receiver Shun Brown. Brown is at his best in space, so he will be in perpetual motion, with the end goal being creating a favorable matchup. Rich Rod will look to get him isolated against a linebacker. Shun will also be utilized on fly sweeps and reverses.

CU’s struggles against the pass won’t be exploited because of Dawkins’ inability to anticipate throws. His mechanics are lacking, leading to mostly inaccurate passes. Colorado should be able to confuse him before the snap, with a variety of disguised coverages.

JG:  On the flip side, Colorado’s offense has all of the necessary components to be deadly through the air and on the ground. That said, the offense has yet to really fire on all cylinders. Let’s say that come Saturday, the Buffs’ offense plays near flawlessly. Can you tell me about Arizona’s secondary and also its front seven? Can the Wildcats contain CU tailback Phil Lindsay while also locking down its deep and experienced receiving corps?

NS: Lindsay will have room to run, due to how undersized the Arizona front is. That said, the linebacker corps is athletic enough to provide resistance. The second level is a bit young though, so don’t be shocked if they do make the occasional mistake.

Tony Fields is a star in the making. He will be a name you hear often on Saturday. With CU’s passing game, look for Flannigan-Fowles to be a factor, especially if Montez isn’t disciplined with his eyes. Cruikshank and Dante Whitaker are solid corners that are better in press coverage.

Unfortunately, defensive coordinator Marcel Yates prefers a more passive coverage scheme, which will give CU’s receivers easy catches. I fully expect the Buffs to take advantage of that by running a variety of short and intermediate routes.

JG: In Boulder, many are aware of what a third straight conference loss could mean for Colorado and its hopes of making a solid bowl, let alone one at all. What’s at stake for the Wildcats here?

NS: A loss here for Arizona would be a death knell. There aren’t too many games left in which one could reasonably expect the Cats to compete. Rich Rod is on a blazing hot seat, so a loss here would make his seat even hotter, and may be enough to push the new AD over the edge. A win would merely prolong the agony, that is until the heart of the conference slate pushes the Cats out of contention. Coming into the season, a bowl game, or visible improvement was the goal. Visible improvement would mean 4-6 total wins [at this point].