From Kepler to K2: CU prepares for new space mission 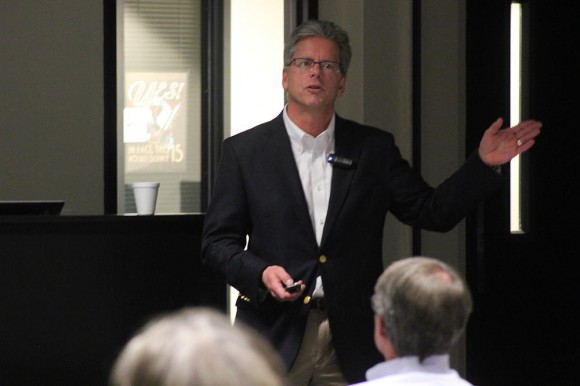 John Troeltzsch was a guest speaker for the Laboratory for Atmospheric and Space Physics on Wednesday, Nov. 12. He discussed how the end of Kepler’s mission will bring about a new program, K2. (Jade Lang/CU Independent)

Ball Aerospace & Technologies Senior Program Manager John Troeltzsch delivered a mission update for the Kepler Spacecraft on Wednesday evening. The spacecraft was built in Boulder by Ball Corporation, and is currently being controlled from the LASP building by CU students.

The loss of two of the spacecraft’s position controlling reaction wheels in July 2012 and May 2013 made it impossible for the spacecraft to continue its scheduled data collection, but the remaining instruments on board remain intact and usable.

“We pretty much came up with a whole new mission plan and had it approved by NASA in six months,” said Troeltzsch.

That new mission plan is called K2, and uses the Kepler Spacecraft as a general purpose, deep space telescope.

The mission is now an open-source operation, and the K2 Mission accepts scientific proposals of any kind, but most are related to the observation of planets outside of our solar system. With the help of the Kepler Spacecraft, our species has confirmed the existence of 1,849 of these planets and continues to confirm more on an almost daily basis.

“It really is amazing what we know about the universe, given how little of it we’ve actually been to,” said Caelan Morrison, a junior studying engineering physics who attended Troeltzsch’s lecture.

“For most of human history, we’ve only been able to ask big questions,” said Troeltzsch. “Now we’re finally at the level of technological capability to start answering them. Kepler is helping answer the question of what else is out there.”