Colorado takes down No. 14 Arizona 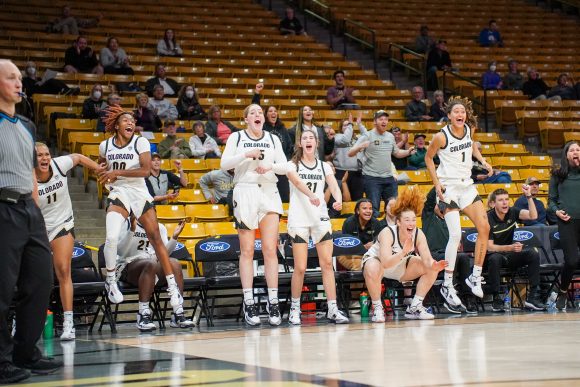 The mile-high air proved to be too much for No. 14 Arizona as the Colorado women’s basketball team dominated the Wildcats, 72-65, on Friday night at the CU Events Center.

This marks the second straight win against an AP top-15 ranked opponent, following Colorado’s win over No.8 Utah last Friday. Colorado improved to 14-3 overall and 5-1 in conference play.

“I’m so happy, so proud and so many different people stepped up in huge key moments,” said head coach J.R. Payne. “It wasn’t just Frida’s [Formann] 3; it was Tayanna’s [Jones] rebound, it was Quay’s [Miller] box out and it was Jaylyn’s [Sherrod] attack to draw the foul. So many different people came up big, and our composure was great.”

“It feels great,” said Payne. “I think our coaching staff does a great job of focusing on every day. This is cool. It’s great. We beat Arizona, but the next practice, nobody cares about that anymore. We’re focused on what we must do to be great today. I think that allows us to work to be excellent at everything we do, whether it’s Arizona or a team that nobody’s ever heard of. We try to play the same brand of basketball every single day”

Although a small crowd of 1,974, it has been the largest turnout for a women’s game this season.

“I saw some of them [holding signs] when I was subbing in and just gave them a nod,” said guard Frida Formann. “They came up to me after the game and it’s great to see, especially students because I really want more students to come to our games. It’s always nice to have some fans out there.”

The first 1:30 of the first quarter remained scoreless until Arizona’s Lauren Fields scored two points. The Buffs quickly retaliated when Formann scored a 3-pointer. Quickly, Colorado’s lead was extended off of another 3-pointer by Quay Miller. Arizona attempted to catch up in the first quarter but couldn’t match the Buffaloes’ pace. At the end of the first, the score remained 18-8.

Less than two minutes into the second quarter, Colorado had hit a double-digit margin above the Wildcats, 20-10. Over a four-minute span, Arizona had slowly started to chip away at the Buffaloes’ lead, bringing the score margin to two points. At the end of the half, Colorado barely held their lead 31-29.

Coming out of intermission, Colorado continued to hold their own. Kindyll Wetta scored eight points with four being free throws. Between numerous 3-pointers and free throws, the Buffaloes continued to lead 51-46.

The final quarter came down to the wire. For the first five minutes, Arizona continuously shaved away at Colorado’s lead bringing the match to a tie 59-59. The Wildcats’ Shaina Pellington scored two points briefly giving Arizona the lead. For nearly a minute the lead shifted back and forth between Colorado and Arizona until finally, the Buffaloes caught traction. In the final minute of the match-up, Colorado went on an 8-0 scoring run to give them a comfortable lead, 70-63. Arizona attempted a comeback but the time clock was too short. Colorado came out victorious 72-65.

Colorado out-played Arizona in every aspect and it showed on paper. The Buffaloes had a 43-percent (24-for-55) field goal completion while Arizona shot 41 percent (25-for-61). Colorado went 7-for-15 on 3-pointers as opposed to Arizona who had a staggering low 5-for-19. Arizona had a 50-percent free throw percentage which couldn’t compare to Colorado’s 68 percent.

“I think because we’re very much wired that way within our program,” said Payne. “It doesn’t matter whom we play or when we play, we expect that we will work to be excellent, you know, and we use the phrase, the standard is the standard, you know, and effort is everything like these are phrases we, we talk about, and we believe in you know, and so I think our practice will be great Sunday, it’ll be short, but it’ll be great. And then we’ll start preparing for Cal and, you know, get ready to go on the road again.”

Colorado is looking to extend their winning streak to six when they face the Cal Bears on Jan. 20. The Buffaloes will travel to Berkeley, Calif. and tip-off with the bears at 12:30 p.m. MST on the Pac-12 network.