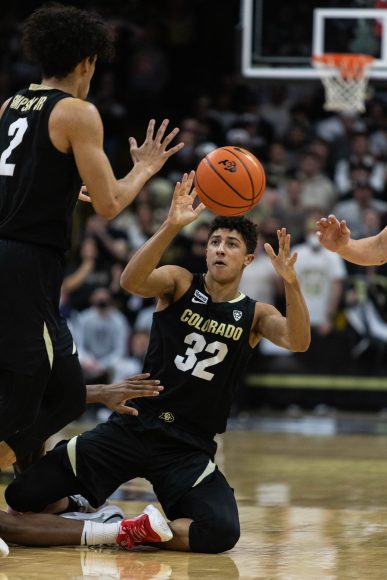 The Colorado Buffaloes men’s basketball team ended the Myrtle Beach Invitational with a 68-55 loss to Boise State on Sunday, Nov. 20. Finishing the tournament with only one win against Texas A&M and two losses to UMass and Boise State, the Buffs are still looking for the right rhythm to win games consistently.

Inconsistency has been the main problem for Colorado in the first six games of the season, as there have been games where the Buffs score 100 points against a top-25-ranked team and games where they only score around 50 points to unranked teams.

“UMass climbed up into us. We couldn’t handle it, couldn’t finish. Boise State did the same thing,” said Head Coach Tad Boyle. “Look, toughness is making free throws on the road, getting to the line. We had plenty of opportunities to do that, and we didn’t.”

In their Sunday night game against Boise State, CU struggled to find any offense and played slow and sloppy trying to defend the Broncos. Their shooting difference was night and day compared to Friday’s win against A&M, as the Buffs played with much less effort and intensity than they did in the two previous games.

Junior Tristan da Silva accounted for seven of the first eight Colorado points, as he was the only Buffalo who could find the bottom of the net in the first half. However, da Silva only finished with nine points total, as he was forced to leave the game after hitting his head.

“He took a shot to the head. You know Tristan struggles with migraines,” said Boyle. “Again, that was part of it. So he wasn’t able to come back. When he’s out and J’Vonne Hadley is out, we’re pretty exposed in that front line.”

As a team, Colorado shot 35% from the field and 20% from the 3-point range. This was two days after playing their best offensive game of the season, making almost twice as many shots against Texas A&M than they did against Boise State. After scoring a career-high of 30 points on Friday, sophomore K.J. Simpson continued to lead the Buffs in scoring but with only 14 points on 6-13 shooting.

“I just felt like we don’t know how to respond,” said Simpson. “We’re good when we’re up, and we have shots falling when we move the ball and when everything’s going good on the offense, but when shots don’t fall, we were just not responding.”

With their shots not falling, Colorado saw themselves down by about 10 points for most of the game. As CU was only down 41-33 at halftime, the Buffs missed nine shots in a row, missing free throws and allowing offensive rebounds simultaneously. They also struggled with passing and possession of the ball, as Colorado finished with 14 turnovers and only nine assists.

In all six of their games this season, the most points Colorado has given up on defense is 75, which came in their win against Texas A&M. All three of the Buffs’ losses, however, have come when they score less than 75 points, like against Boise State and UMass. As a team with lots of depth, playing around ten players each game and keeping games low scoring will be crucial because the Buffs don’t have a singular star player that can help them come back from any large deficit.

“We need to practice, we have not had an opportunity to practice on this trip and it shows,” Tad Boyle said. “It’s time to get back in that gym and get out [to] practice…and our guys are gonna get tougher.”

As their first six games have been in a win-loss pattern, the Buffs sit even at 3-3. With hopes of making it to the NCAA tournament this year, CU looks to put this stretch behind them and learn from it.

“So it’s been a tough stretch for us,” said junior forward Nique Clifford. “We keep going back and forth win-loss, win-loss. So you know, we’ve just got to get back to the drawing board when we get back. [We have to] practice hard and just figure out what we’re doing wrong.”

After a long road trip, the Colorado men’s basketball team has a few days of rest over the Thanksgiving break. They return to action on Sunday, Nov. 27, as they will host the Yale Bulldogs in Boulder at 2 p.m. MST at the CU Events Center.