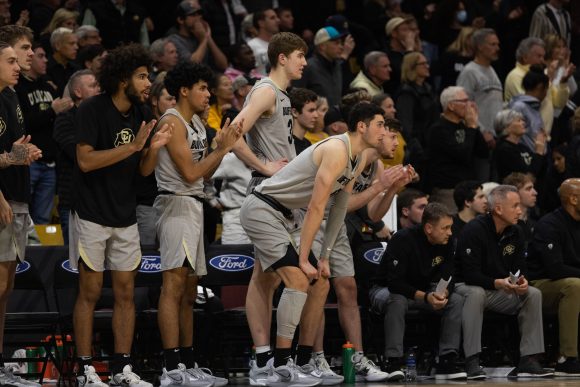 The Buffs watch their teammates during the second half at the CU Events Center. Dec. 1, 2022. (Kara Wagenknecht/The CU Independent)

Despite their hopes for a rebound after a home loss to Arizona State on Dec. 1, the Buffs lost 63-73 to the University of Washington for their second conference game on Sunday, Dec. 4. After the loss to the 6-2 Huskies, Colorado falls to a 4-5 record overall and 0-2 in conference play. The Buffaloes have now dropped three of their past four games.

The first half of the game stayed close, as guards K.J. Simpson and J’Vonne Hadley exchanged buckets in the early minutes. The second unit for Colorado came out strong as well, with guards Nique Clifford and Javon Ruffin each knocking in a three. Despite the spread of early scores, Colorado struggled to keep possession of the ball, not working like a cohesive unit. Though the game was tied near the end of the first half, Washington then made five of their last sevens shots, going up to 33-26 at halftime.

“[With] the lane violations and the missed free throws, it put so much pressure on our defense,” Boyle said. “And our defense wasn’t good enough either.”

For the opening of the second half, the Buffs continued to struggle, facing the same problems that had plagued their Dec. 1 loss and several other games during the season. With careless turnovers to the Huskies and weak offensive plays, the Buffs saw themselves down 36-50 midway through the second half. By this point, Washington had already scored 23 points off Colorado turnovers.

“Right now, we’re not playing smart enough,” Boyle said. “We’re not playing well enough offensively. When we get open shots, we must be able to make those open shots. But with 18 turnovers in league play, it’s going to be hard to win games.”

With about 10 minutes to go, the Buffs found a sudden burst of momentum in their offense. With forward Tristan da Silva open at the free throw line a few times and Simpson hitting a few shots, Colorado climbed back. After getting six of eight shots in a row and going on a 9-0 run, Colorado was only behind by three points with five minutes remaining.

However, just as the Buffs had almost caught up, the Huskies proceeded to hit their last five shot attempts, giving them a late eight-point lead. Despite a big dunk by da Silva and a late three-pointer from guard Javon Ruffin, the Buffs couldn’t complete the comeback against the seemingly unstoppable Huskies. The game ended with a Colorado loss 63-73 to Washington.

By the final whistle, only three Buffaloes had finished with double-digit scoring: Simpson and da Silva with 13 points each and Hadley with 15 points. As the season goes on, it seems as though these are Colorado’s strongest players.

Though it was a physical and demanding game against one of the conference’s best teams, Colorado had a chance to win the game up until the buzzer sounded. However, similar to their past few games, the Buffs had trouble finding easy and open shots as the match went on. Colorado shot 37% from the field in the first half, and they finished with only 5 three-pointers all game. Despite their attempted comeback with a 14-2 run, CU was already too far behind due to poor shots and 18 turnovers from earlier in the game.

“I just feel like we’ve got to stop looking up at the clock and at the score and just keep playing,” Simpson said. “Then those silly, loose turnovers that we have, those easy shots that we didn’t make, those free throws — those little things will all fall [into place] if we focus in on [the game].”

After two very tough back-to-back losses, Colorado looks to bounce back as they host their longtime foes the Colorado State Rams. The interstate rivalry will take place at 7 p.m. on Thursday, Dec. 8 at the CU Events Center.