“ShakesFear” is an immersive and spooky experience for all audiences 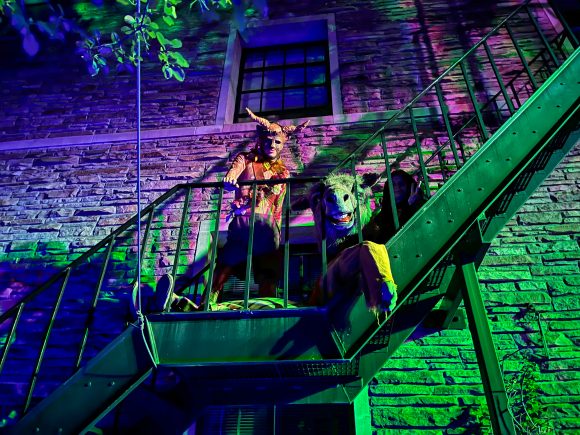 Daniel Oliveri and puppeteer Fern Skeen prepare for an initial dress rehearsal as the beloved Puck and Bottom.
[Courtesy of Heather Kelley]

Outside the gates of the University of Colorado Boulder’s Mary Rippon Outdoor Theater stands a group of CU students and Boulder residents alike, anxiously awaiting their entry into the wash of red, purple, and green lights. Upon crossing the threshold between campus and an eerie, 15th-century-inspired world, the first thing they see is William Shakespeare locked in a cage. He says that his characters have locked him away, and he needs the audience’s help to set him free. 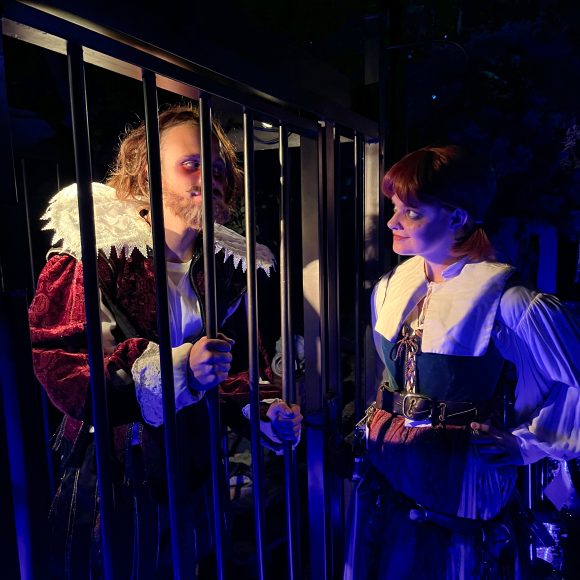 Jude Stivers and Marisa Dinsmoor as Shakespeare and the Jailer’s Daughter. [Courtesy of Heather Kelley]

CU’s Theater and Dance Associate Chair Kevin Rich started producing “ShakesFear” in 2014 at the Illinois State University, while he was the artistic director at the Illinois Shakespeare Festival. Rich and his colleagues were trying to find a way to engage more students at the university and give them an accessible entry into the world of Shakespeare.

“He has become kind of a diamond and caviar playwright in some respects,” said Rich. “I’m really interested in the theater that’s trying to present Shakespeare in a more populist way.”

Rich said that throughout his many years producing this show, Shakespeare “purists” have approached him, worried that he might be desecrating these storied works of fiction by presenting them antithetically to the way they were meant to be performed. Rich said the opposite is, in fact, true, and that he is paying homage to William Shakespeare by repeating the same process Shakespeare did hundreds of years ago: taking long-beloved stories and making them his own.

“[Shakespeare] was adapting his classical stories, excellent plays and historical narratives for his contemporary audience,” said Rich. “So to me, it feels like in the spirit of what Shakespeare would have wanted– to do the same thing with his plays. And I’ve had purists push back against that. But my response is, who’s really the purist?” 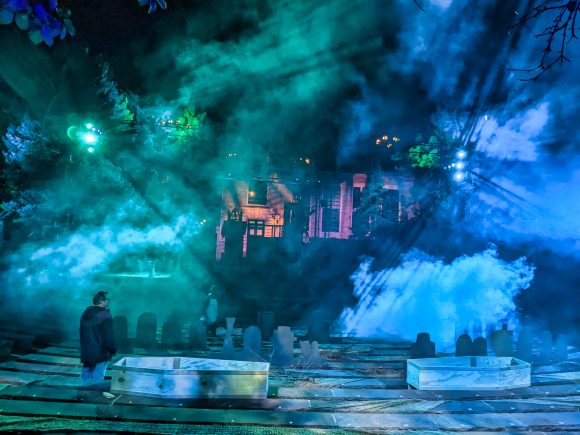 Scenic Designer Bruce Bergner and Technical Director Jordan Feeler survey the progress being made by the CU Theatre Design Tech Management students in the nighttime hours of the Mary Rippon Theater. [Courtesy of Jonathan Spencer]

“ShakesFear” is a truly enchanting experience for Shakespeare lovers and newcomers alike. For several of the cast members, including CU Junior Joan McEnhill, the ability of the show to break down barriers to entry for Shakespeare’s works was one of the biggest draws to participate.

“I feel like a lot of people are put off from Shakespeare because of experiences that they’ve had in their high school English class,” said McEnhill. “I think being able to see these characters in these stories in this kind of mismatch of Shakespeare really gets you intrigued.”

The show is truly immersive. As the audience is walking through the sets, they are bombarded by a spectacle from every angle. Cast members like CU sophomore Marie-Antoinette Banks hope that the audience can learn through their tangible interactions with the characters.

“They’re a part of the stories that we’re telling,” said Banks. “ShakesFear doesn’t exist without the audience. I hope it makes Shakespeare just maybe the slightest bit more accessible.”

Whether you’re very familiar with the near-dozen plays featured in “ShakesFear” or a total newcomer, there’s something in the show for everyone. The costumes and scripts are generally true to the originals, except for the fake blood and costume wounds that each cast member is sporting throughout the duration of the show. The sets are spectacular; each one is unique and surprisingly intricate. In several scenes, there is some incredible puppet work, with set pieces that could easily scale to more than twenty feet tall. The scenes are all from different plays, but some characters are intermingled into different scenes, making for a seamless pastiche of stories. Even if you don’t understand the Elizabethan language, the spectacle itself is enough to make the ticket worth the price.

“ShakesFear” is open at the Mary Rippon Theater through Sunday, Oct. 16. Tickets are available through CU Presents here.