A new season starts for a young, but prepared, Colorado basketball team 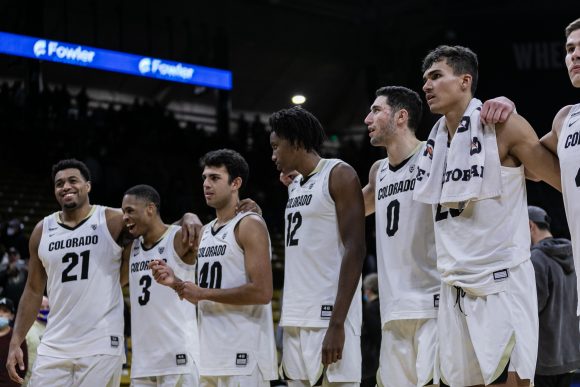 On Wednesday, Oct. 5, the University of Colorado Boulder Men’s Basketball team held its first open practice and media day. It signified the start of the 2022-23 season, one in which the Buffs look to contend with a young team sporting a new look.

Over the summer, the Buffaloes lost a few key players from last season. Star player Evan Battey graduated, Jabari Walker got drafted by the Portland Trail Blazers, and point guard Keyshawn Barthelemy transferred to the University of Oregon. With many of these lead performers out, the Buffaloes are looking to see who will step up and lead the team forward.

New faces have also arrived in Boulder for the upcoming season: graduate transfers Jalen Gabbidon from Yale, Ethan Wright from Princeton and J’vonne Hadley from Indian Hills Community College all look to make an immediate impact at Colorado.

In his 13th season at the helm, Head Coach Tad Boyle is excited about his group and getting to work.

“I feel the same way today as I felt [when I got the job], and I really like this team,” said Boyle after practice. “We may struggle a little bit, but we’ve got some returning [players] that got to step up into different roles and be everyday guys, when maybe last year they were pieces of the puzzle.”

Of their returning players, juniors Tristan da Silva, Luke O’Brien, and sophomore point guard K.J. Simpson are all expected to make a leap and be the leaders of this youthful squad. With many freshmen and incoming transfers new to the team, those with multiple years of experience under Boyle look to command this team.

Tristan da Silva, the 6’9″ junior forward from Munich, seemed ready for the challenge ahead of him to step up to a leadership position on the team.

“I mean, [Coach Boyle] talked about it today, everyday guys,” said da Silva. “First of all, that’s basically stepping up and setting the example.”

Da Silva averaged 9.4 points and 3.5 rebounds last year, but with the exit of Evan Battey, he looks to be the heart of this Colorado team, on the offensive end and in the locker room.

“I was more of a quiet guy last year and the year before and I know that if I don’t talk, it’s gonna be difficult for our team. I took on the role, and I talk more now than ever,” he said.

Simpson was also enthusiastic about the team, alluding to the Buffaloes’ ability to rotate players in and out without any talent drop-off.

“We have a lot of guys who could go and push and exert themselves for however long they need to,” said Simpson. “Another guy who’s just as fast could come in, that’s really dangerous.”

When asked about following in the footsteps of McKinley Wright, previous star point guard for the Buffaloes, Simpson had a smile on his face. He explained how he’s gotten a lot of help from Colorado’s all-time assist leader.

“It’s as if I kind of played with him in a sense because I can talk to him about basketball,” said Simpson. “We’ve grown stronger now. So I can ask him anything I want, I’m not afraid to.”

Simpson and sophomore guard Julian Hammond III hopes to bring more energy and high competition to the Colorado backcourt as they are in more prominent roles this season.

O’Brien answered questions about his new role in this younger Buffaloes team after coming off the bench much of last year.

“I know the coaches want me to be more of a leader,” said O’Brien. “Anything I can do to help my team win is what I want to do. But really, I want to get wins. That’s the most important thing for me.”

A few other players will be looking to step up and have an increased role in the upcoming season. Sophomore Lawson Lovering will be the Buffs’ starting center after missing more than half of last season with an injury. Quincy Allen and Javon Ruffin both redshirted last year due to injury and are expected to be significant contributors. Junior forward Nique Clifford will also see an increased role, as last year he showed defensive potential and a great three-point shot.

Boyle seemed confident the changes and youthfulness of his team would be a recipe for success.

“We have control over one thing, and that’s the Colorado Buffaloes in this program,” said Boyle. “We’re hopeful our young guys will learn that you have to embrace every game. And we can take that to heart and understand every one of those opportunities is a chance to improve our chances to be an NCAA tournament team.”

This year’s roster features eight freshmen on the team who haven’t seen college action before. Their inexperience means it’s critical more experienced players like da Silva, O’Brien and Simpson take the reins and help lead the team to achieve their lofty expectations.

The Colorado Buffaloes men’s basketball team will hold an open scrimmage on Saturday, Oct. 15, at 9 a.m. at the CU Events Center. The team will also play an exhibition game against Nebraska in Boulder on Oct. 30 at 4 p.m. A little more than a week later, the Buffs will officially start their season on the Pac-12 Network facing UC Riverside in Boulder on Nov. 7, 2022.