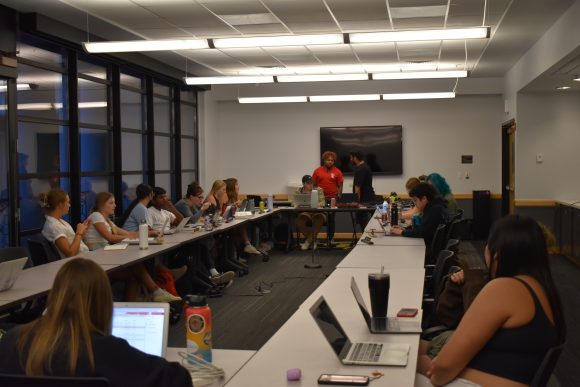 Student legislators gather in the UMC for the CUSG Legislative Meeting on Sept. 8, 2022. (Isabella Hammond/CU Independent)

On Thursday evening, Sept. 8, the legislative branch of the University of Colorado Boulder Student Government heard proposed amendments to the CUSG election code. The amendments were written to address issues that were brought to light in the spring 2022 CUSG election.

Last semester, the leading tri-executive ticket, Inspire, was accused of bribery by the Unity ticket. They were subsequently disqualified in an election tribunal and Unity, which received the next largest number of votes, was given the executive nomination.

The first reading of new bill 97 LCB 07 proposed that the Election Commission should remain neutral in infraction tribunals. In the previous election, then-Election Commissioner Tom Anderson testified on behalf of the Unity ticket during the tribunal.

The bill also expanded the definition of bribery to include offering CUSG positions to students and will hold individuals working for a ticket solely responsible for a violation unless the ticket or candidate had prior knowledge of their infraction.

The majority of the amendments presented by Ramish aim to avoid another controversy in upcoming elections. Before the bill was passed onto a second reading, Graduate and Professional Student Government Co-Senator Jake Carias introduced a series of his own amendments.

Carias proposed ending the ticket system in favor of individual candidacy and introducing a jury to infraction tribunals.

“September is our best opportunity to make significant and substantial changes to the election code,” said Carias in defense of his amendments. Legislators discussed his amendments lasted about two hours but did not pass them to the next step in the revision process, due to next week’s deadline to finalize election code changes.

Changes to the election code must first go through CUSG’s Election Commission for approval.

Two other notable changes were proposed in the bill. The first change reduces tickets to two candidates for representative-at-large, an effort to slowly transition to individual candidate campaigns. The second change restructures elections so voters can rank candidates, switching to a rank-choice voting model.

CUSG legislators passed the bill to a second reading where they will then have a chance to propose more amendments and vote on finalizing the bill next week.