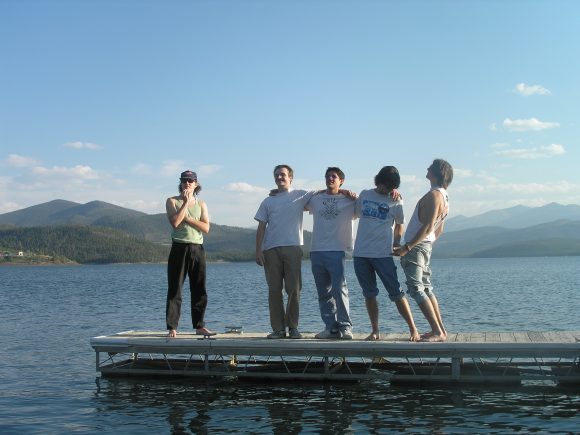 Local indie surf-rock band The Rocky Coasts made their Dillon Amphitheater debut playing an extended two-hour setlist the evening of Sept. 6. Tuesday’s performance marks a monumental step in The Rocky Coasts’s success. The band has already been invited back to perform at the amphitheater in the summer of 2023.

The now-Boulder local band consists of five members. Kiril Hadjipetkov is one of two lead guitarists and vocalists, the other being Rhys Heraghty. The remaining members are bassist TJ Gembala, drummer Jason Shegoleff and saxophonist Teak Biaggi.

“This is something we’ve looked forward to for so long,” said guitarist Kiril Hadjipetkov. “Last year, the thing we looked forward to was [the] Fox. It’s really cool to think that we don’t have Dillon to look forward to anymore — now we have the next thing. “

The Dillon Amphitheater is known for two things: uniquely beautiful acoustics and its waterside mountain view. 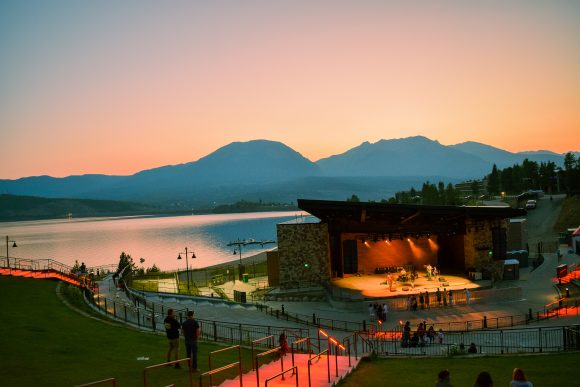 “This is possibly the most magical place I’ve ever seen with my own two eyes,” said guitarist Rhys Heraghty. “The people that work here are extremely pleasant to deal with. They’re very nice and they mixed our stuff fantastically. So that gave us an extra boost of confidence.”

“My kick drum sounded like a bomb going off,” said drummer Shegoleff of the acoustics in the amphitheater.

According to the program coordinator, The Rocky Coasts attracted an audience of around 200 to the iconic outdoor venue. The artists see Dillon Amphitheater as a stepping stone toward performing at Denver venues, and eventually even Red Rocks Amphitheatre.

“We definitely want to branch out more,” said bassist Gembala. “This has definitely been a step towards breaking out of Boulder and playing more venues.”

“This was just good practice in terms of the size of the venue,” said Heraghty. “It might not have been our most packed show, but it was amazing to just play in such a large space and be able to mix it right as opposed to being cramped in a room in a college house.” 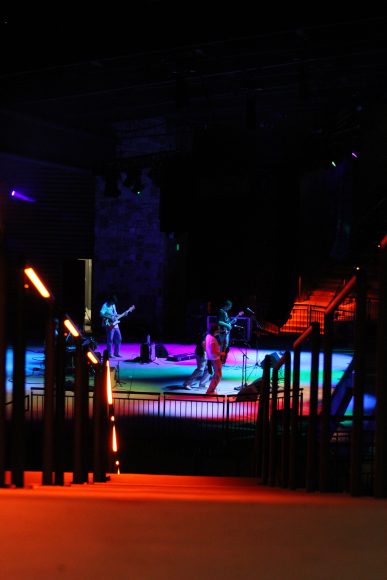 Band managers Lily Fletcher and Oliver Pollock spent the night coordinating media promotion for the band, including on-stage photography and video. Both managers see vast potential for the band as they expand beyond the Boulder music scene.

“Just seeing them on a bigger stage and with more professional equipment shows us where the band could be in the next year or so,” said Fletcher. “It’s a really unique opportunity to be able to reach a new audience that’s not in Boulder directly. Trying to push their social media and their Spotify and get them more recognition in areas other than Boulder was really important for us tonight.”

In addition to the regular six performing members, The Rocky Coasts invited musician, producer, and long-time friend Ben Lacey to perform alongside them at the amphitheater on Tuesday. Lacey performed on wood blocks for the band’s cover of LCD Soundsystem’s “Home.” It was Lacey’s second performance with The Rocky Coasts to date.

“They played me the first 30 seconds of the song and they were just like, ‘Do this for eight minutes,’” Lacey said on how the collaboration came to be.  “And I was like, ‘I think I can handle that.’”

“I think the night was incredible,” said one concertgoer. “It’s awesome to see them play a bigger venue. They deserve it, and I hope that there’s more to come.”

As The Rocky Coasts amass a broader Colorado following, one thing remains certain: they’ll work overtime to make sure their goals of performing for wider audiences are achieved. Performing in Dillon has perhaps provided that necessary push into the spotlight.

“The Rocky Coasts have hit the countryside and now we’re going to the big city– specifically Denver,” joked Shegoleff.