Review: The colorful, surrealist opera “Postcard from Morocco” at CU 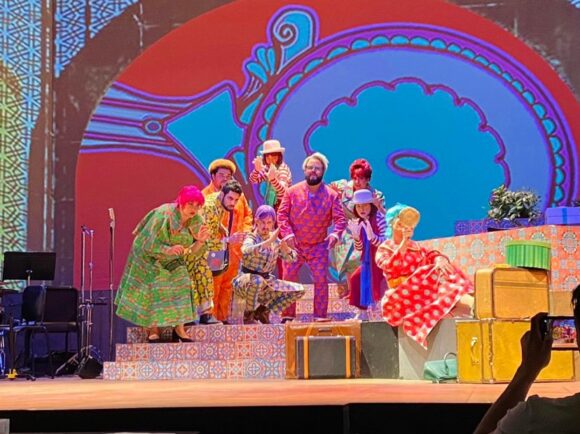 Seven strangers find themselves waiting together in a train station on their way to an exotic destination. They each hold a symbolic everyday item — a hand mirror, a cake box, a hat box, an old luggage, a paint box, a shoe sample kit and a cornet case — that represents their own stories. As the scene unfolds, each character is forced to examine their own personal baggage, literally and metaphorically.

This is the premise of Dominick Argento’s “Postcard from Morocco,” a surrealistic chamber opera premiered in 1971. In one-act with no linear plot, the opera explores the ephemeral nature of human existence.

The University of Colorado Boulder’s Eklund Opera Program performed the opening night of “Postcard from Morocco” on Thursday, April 21 in the Imig Music Building’s Music Theater. Their colorful interpretation leaned into the absurdity of Argento’s opera — with psychedelic color-coded costumes, cartoonish projections and symbolic dancing puppets.

With an ensemble cast of seven characters, the opera offered opportunities for all of the performers to shine. Each one had their own scene with an aria, showcasing their dramatic and musical skills.

“It’s a true ensemble piece of theater, meaning there are no stars,” director Leigh Holman said.

“The whole opera is a wonderfully precocious exercise in literature and music,” Carthy added.

He explained that the libretto, written by John Donahue, references many different literary sources. It is loosely based on Robert Louis Stevenson’s “A Child’s Garden of Verses,” a 19th century collection of children’s poems. Other sources include “The Odyssey,” James Joyce’s “Ulysses,” Samuel Beckett’s “Waiting for Godot” and John Fowles’ “The Magus.” He also likens it to Kazuo Ishiguro’s “The Unconsoled,” though this novel was published decades later in 1996. 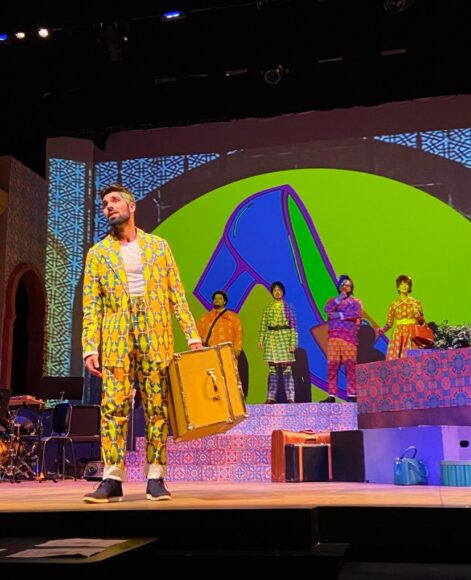 “You’re not meant to seek all of these (references) out,” Carthy said. “All of these little quotes are simply part of the kaleidoscope of the whole opera. (It reflects how) we are all the result of unfathomable numbers of experiences that have happened in our lives.”

From the opening moments, the staging and costumes thrust the audience into the trippy world of Argento’s imagination. Set and projection designer Ron Mueller transformed the music theater into a train station with porcelain tile steps and massive projections of stained glass windows.

The vivid, elaborate costumes, designed by Anne Piano based on sketches from Maya Hairston-Brown, lit up the stage. Each character wore a different neon color, which reflected their prop and personality. This proved helpful when differentiating between them, given the omission of real names in the libretto.

For example, the Lady with a Hand Mirror (soprano Alice Del Simone) wore red — from her wig to her dress, patterned with tiny mirrors, to her purse. The Lady with a Cake Box (soprano Kyrie Laybourn) wore cotton candy blue with her Gwen Stefani-esque wig and a poofy dress, covered with mini cherry-topped magenta cakes. The Man with a Paint Box (tenor Paul Wolf), the only character referred to by name as Mr. Owens, wore an ocean blue suit with paint-covered palettes and had spray-painted hair.

Even Carthy and the orchestra members, who sat on stage right, wore costumes — striped red shirts that made for a sea of easily findable “Where’s Waldos.”

The ensemble cast excelled with excellent individual performances. In addition to brilliant vocals, baritone Tyler Padgett as the Man with a Shoe Sample Kit demonstrated his charisma and great sense of comic timing, especially his well-placed snorts and his hilariously frustrated interactions with the overdramatic Laybourn. Simone nailed her virtuosic vocal runs, while Laybourn gave powerful, moving laments to her lost lover. Wolf’s expressive tenor voice captured the mixture of nostalgia and hope in the ending scene. 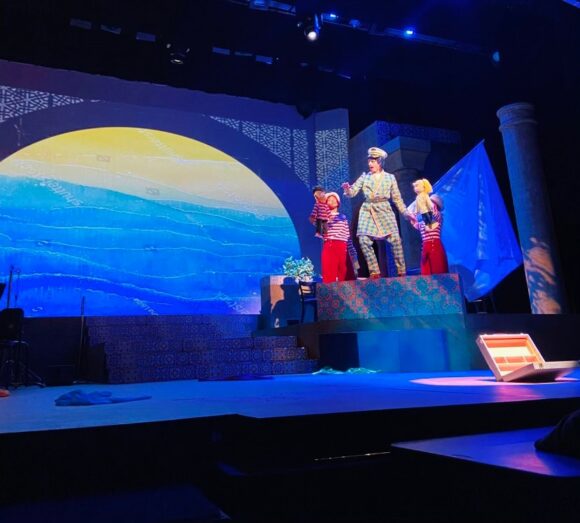 In many of the lighter-hearted ensemble scenes, the mimes, dressed in the same outfits as the orchestra, added comedic relief as they acted out the main characters’ arias and waved around puppets. The puppets often signaled pivotal moments in a character’s story and thus became thematically symbolic throughout the opera.

“The puppets later become a metaphor for us as individuals,” Holman said. “It brings up the question (of whether) we too are puppets. Is something above us or in our minds that makes us less autonomous in our decisions?”

With the ambiguous ending, questions like this are never resolved. Yet, that seems to be the purpose of the Argento’s surrealistic opera — to ponder and yet embrace the absurdity of life.