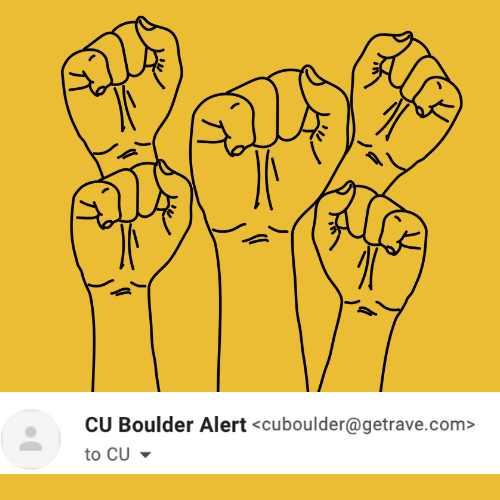 Sophomore Stephen Strohm and his peers were sitting in class on Feb.1 when suddenly they all checked their glowing phones. Across campus, notifications pinged everywhere. Thousands of screens read, “CU Alert: Shelter in place issued for 955 Broadway/Uni Hill Elementary area per Boulder PD. Shelter in place if nearby. Avoid area.”

When the emergency notification went out to the university, Strohm was unsure if he was at risk.

The incident involving a 31-year-old man who sent an 800-page manifesto to the University of California Los Angeles Police Department disclosing violent threats to Boulder and UCLA came nearly a year after one of Strohm’s first interactions with the university’s alert system. On March 6, 2021, on the University Hill, a riot involving University of Colorado Boulder students broke out. During the riot, Strohm recalls seeing videos circulating social media showing aggressive party-goers disrupting the neighborhood and causing property damage.

The initial alert sent from the university had a subject line of RUN. HIDE. FIGHT. and read, “CU Alert: Boulder Police is responding to a large party in the area of 10th & Pennsylvania. People in the area could be subject to arrest and CU sanctions.” The subject line wasn’t corrected until over an hour later.

“I remember most, the effect that it had with people on social media, just kind of laughing at the school,” Strohm said. “Nobody takes it seriously.”

“Nobody takes it seriously.”

This is not the first time the RUN. HIDE. FIGHT. phrase has resulted in jokes across the CU student body. Senior Casey Caplin said they recall a 2018 on-campus lockdown with similar messaging.

Caplin says few people knew what run, hide, fight meant when the alert was sent out because of its novelty at the time.

“It became the biggest joke in the world because who sends out a message like that with no clue?” they said. “We didn’t know what it was for.”

The university has tried to keep up with criticism of the alert system throughout its implementation. Going back to the early 2010s, officials have published multiple explainers in CU Boulder Today about how the alert system functions.

The university put out a statement on Dec. 4, 2013, to raise awareness about the alert system, which was somewhat new to campus at the time. In the message, former CU Boulder emergency management director Stuart Pike said that “emergencies can happen quickly and without warning” while referring to the floods that devastated Boulder and neighboring cities that year.

“The Campus Alerts system is our most effective means of communicating key safety messages to the campus community. It’s important for students, faculty and staff to be aware of this critical messaging platform,” Stuart said in the statement.

The university currently uses a wide array of platforms to push alerts to community members, including social media, text messages to registered phone numbers and emails to all @colorado.edu addresses.

In the past year, many in the CU Boulder community saw the importance of the alerts as tragedy struck time and time again. While the frequency of alerts sent out by the university has remained relatively consistent in the past few years, concerns for the system have grown louder. Community members have faced more life-threatening situations since 2020, including COVID-19, the Table Mesa King Soopers shooting, a bomb threat on Pearl Street, shootings in neighborhoods that surround campus and wildfires.

Hundreds of students have alleged their grievances with the university’s alert system. Two petitions, garnering thousands of signatures, demanded the university alter the setup. One such petition requested Chancellor Philip DiStefano resign from his position over the discrepancies.

The petition calling for DiStefano’s resignation came in response to the Feb. 1, 2022, University Hill incident. The same day, Distefano sent a message to the CU Boulder community to discuss what occurred.

In the statement, he said, “We will also continue working with our partners to review our safety alerting procedures to ensure we are providing our campus with critical, relevant and timely emergency updates.”

Josh Lindenstein, whom the CU Independent spoke to while he was serving as acting director of communications for the university, said that there is currently no timeline in place for revisions to the system.

While officials have said they don’t plan on updating the systems that send out alerts, they have said the processes that determine the speed at which messages go out are under review.

Lindenstein also said that he was aware that the speed of university alerts was a cause of frustration for community members. However, after the Feb. 1 incident, he said that officials had conversations about how to send notifications while still being timely and accurate.

“What we don’t want to do is put out wrong information that may make a situation worse or cause harm, and so it’s that balance between getting it out fast and making sure everything we’re putting out is verified,” Lindenstein said.

“It’s that balance between getting it out fast and making sure everything we’re putting out is verified.”

The CU Independent has reached out numerous times to the university to obtain the exact time when communications staff were permitted to send out an alert message on Feb. 1. However, the university has been unable to provide a definitive time.

Still, the former acting director of communications said that he understands the concern some students have.

“We have those discussions (about) what went right, what can we improve upon and how can we continue to work together to make sure we’re getting verified, confirmed information, and actionable information out to the community as fast as possible,” Lindenstein said.

Officials said part of those discussions also included resolving how to communicate off-campus information to the university community.

In a recent op-ed that appeared in the Daily Camera, CU Boulder Chief of Police Doreen Jokerst encouraged community members to proactively find other sources of information about time-sensitive events in Boulder.

“We ask our community to partner with us by seeking out emergency off-campus information resources from proper channels before emergencies occur,” she wrote.

The university has a legal obligation to report crime statistics and notify community members about dangerous events that could impact the campus or its community. To receive federal funding, CU Boulder must abide by a set of federal regulations in a law called the Jeanne Clery Act.

The Clery Act is a consumer protection law that was passed in 1990. The Clery Act requires all universities and colleges that receive federal funding to share information about crime on campus, efforts to improve campus safety and to notify the public about crime on or around campuses.

The act says, “If there is an immediate threat to the health or safety of students or employees occurring on campus, as described in paragraph (g)(1) of this section, an institution must follow its emergency notification procedures. An institution that follows its emergency notification procedures is not required to issue a timely warning based on the same circumstances; however, the institution must provide adequate follow-up information to the community as needed.”

Laura Egan, the senior director of programs for the Clery Center, said she sees approximately 50% of schools expand their policies beyond the legal requirements.

“A campus can always decide that they want to have a more expansive emergency notification policy,” Egan said.

Following the reverse 911 call that University Hill residents received on Feb. 1, the university did not alert the community until 37 minutes later. Students, parents and alumni expressed concern online about the lack of timeliness in alerting on the incident. However, due to CU Boulder’s interpretation of the Clery Act, legally, an alert was not necessary for the incident.

“A campus can always decide that they want to have a more expansive emergency notification policy.”

When it comes to incidents that the university must alert on, the timeliness of sending a message is not well defined in the Clery Act. Frequently, it is left up to the university to interpret what is timely for notifying campus about incidents.

“The [part] of the Clery Act that can be helpful, but also frustrating [is] that it’s designed to be interpreted by any institution of higher education,” Egan said. “So there are some elements where it’s more prescriptive than others.”

While, under the Clery Act, the university has no obligation to notify community members about off-campus events, it has partnered with the Boulder Police Department to do so on many occasions.

“I’m very aware [that] people want to know when something’s happening when they see law enforcement in their area,” said Boulder Police Public Information Officer Dionne Waugh. “As soon as I can get information out, I put it out through our stuff, and I will, almost at the same time, notify one of my counterparts at CU.”

Waugh said that BPD is in communication with the university when events happen that could warrant notifying the CU Boulder community.

“We text and talk all the time when things are happening or when things could overlap,” she said.

Yet, students still are expressing concerns regarding communication from the university during emergencies. A survey consisting of 22 CU Boulder community members showed that many are unsatisfied with the current alert system in place.

Many respondents to the survey stated that during timely events, they turn to Barstool Buffs, a social page designed to show the more recreational sides of CU Boulder life.

Caplin has found themselves looking to Barstool Buffs’ social media for information on incidents. However, they also voiced that alerting the community about emergencies is not the organization’s intended purpose.

“They’re not supposed to be a social media account which provides us with the know-how of how to avoid a dangerous situation on campus,” they said.

Safety has been one of the main topics in the University of Colorado Boulder’s Student Government Spring 2022 election. Several candidates have addressed the alert system on their campaign websites and Instagrams. The CU4All and Amplify tickets both said that the university should alter the alert system; other campaigns have brought up ideas to increase safety and transparency.

Strohm believes changes to the alert system will allow the community to “regain trust” in CU Boulder. He said he wants to see the university provide more information in a timely manner in the future to regain said trust.

“That seems to be the common denominator [in] what’s happening regularly, is that they didn’t do enough,” Caplin said. “I’d rather someone be overzealous with messaging me than not use the alert system enough.”