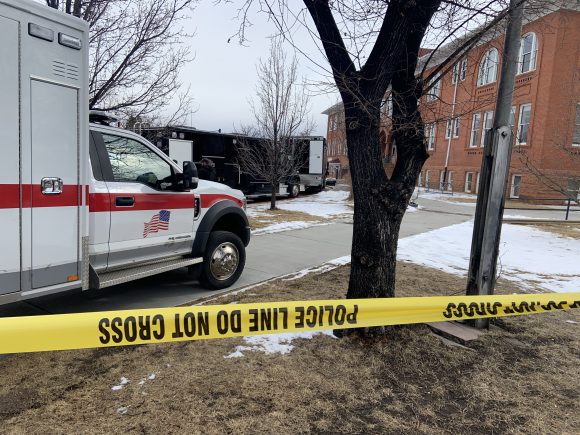 “The UCLA police department tracked [the suspect] to Boulder and they notified the Boulder Police Department in the evening of Jan. 31,” Harold said.

Officials said that the suspect had tried to buy a firearm in Jefferson County Nov. 2, but was unable to after a protection order in California prevented him from purchasing a gun.

The Boulder Regional SWAT team was activated early Tuesday morning and set up a perimeter around where the suspect was staying, Herold said.

At 11:07 a.m., officers arrested the suspect after he spoke with negotiators over the phone. Herold said that police detectives are currently investigating the area where he was found. Residences in the area can expect to see an “extra policing presence” in the coming hours.

District Attorney Michael Dougherty spoke after Herold. Dougherty said that the man was currently in custody on state charges. Those charges have not been announced yet.

“I recognize that today was a scary day for the people of Boulder,” he said.

Cole Finegan, the United States Attorney for the District of Colorado, said that the FBI and the Bureau of Alcohol, Tobacco, Firearms and Explosives are also involved in investigating the case.

“We are also reviewing all possible federal charges at this time,” Finegan said.

At 9:30 a.m., the Boulder Police Department announced that they were evacuating some fraternities and sororities on University Hill, along with University Hill Elementary School, after contacting a “wanted man” in the area.

Herold said that 65 homes in the area of 955 Broadway Road were cautioned to shelter in place by police officials. Affected students could evacuate to the UMC on the university campus.

“Beginning at 9:30 a.m, a Mandatory Shelter In Place Order has been issued for the area surrounding and including 955 Broadway. Take the following protective actions: Shelter in Place. This Order stands Until Further Notice,” said a reverse 911 Call to University Hill residents.

Boulder Valley School District tweeted that University Hill Elementary was evacuated just after 9 a.m. on Tuesday. The school was on Lockout since 8 a.m. that morning. Families were reunited with their children at the BVSD Education Center on Arapahoe Boulevard.

At 10:30 a.m., Police flew drones over the impacted area and had multiple vehicles blocking the surrounding area. Over a loudspeaker, officers attempted to communicate with a person inside an apartment building.

At 12:52 p.m., Boulder Police lifted the shelter in place order in the incident at 955 Broadway.

Later in the afternoon, at 4:36 p.m., Chancellor Philip DiStefano acknowledged the incident in a message to the university community.

“Our CU Boulder community has been through so much over the past two years. I want to express my gratitude to all of you for your patience and understanding as we work through public safety incidents like this,” he said.

DiStefano also said that the university would “review” the safety alert procedures it uses for emergency updates. Some students have taken to social media to express their disappointment with the university’s messaging surrounding the incident on University Hill.

“We understand that information proliferates quickly on social media, and we have a duty to disseminate only factual information in concert with public safety entities. If the ongoing investigation into this incident determines any safety concerns affecting the university, we will notify our campus,” DiStefano said.

In a tweet sent at 5:45 p.m., the Boulder Police Department said that they worked closely with the university when responding to the incident.

“At no point did we believe there was a safety concern to campus,” the tweet read.

Zoe Schacht and Will Oster contributed to this story.