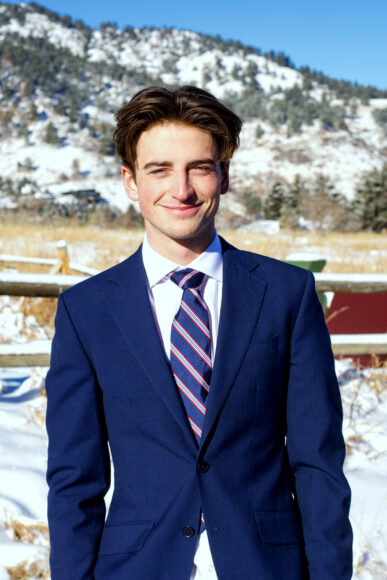 As candidates made their way onto the debate stage last Wednesday, there was an air of excitement among almost all the candidates. They were eager to state their case to students as to why they should serve in the CU Student Government.

For Andrew Harvey, however, that excitement was clouded by stress and anxiety. While he announced last Friday that he was deemed ineligible to run for office due to a past offense, he and his team heard the news on Wednesday, just moments before he took the stage.

With the spring election closing tonight at 8 p.m., the CU Independent spoke with Harvey about what happened, how he and his campaign reacted and what his disqualification means for this week’s election.

This interview has been edited for length and clarity.

CU Independent: So you learned you were ineligible right before the debate?

Andrew: Yeah, it was right before the debate. [The election commissioner] called me and asked if I was in good standing with the school and I said yes. I went back in my email and found this message from July of last year saying basically, “A photo of you was found of you outside not wearing a mask during the mask mandate, and because of this, you’re no longer in good standing with the school.” And that doesn’t end until July 1.

CUI: What are your thoughts on the suddenness of learning this news, and not hearing it when you and your ticket started this campaign seven months ago?

A: The fact that I’ve been working on this campaign for, what, seven months and two months almost as a candidate, and then to hear just days before the election, that was brutal.

Megan McDougall, PR & Social Media Director for Inspire: It felt like something that should’ve been a first step rather than an afterthought for sure.

CUI: After you announced stepping down from the campaign, your supporters flooded the comments with the hashtag #LetHimRun in support. You yourself also wrote #LetMeRun in one of your Instagram stories. Was there any conversation in your campaign about challenging your eligibility?

A: We did quite literally everything in our power as students to make this happen. We hit up administrators we have connections with, camped outside the chancellor’s office on Friday and went to the dean’s office. We probably emailed every single administrator at this school and got no response. The only thing I got was a response with a link to CAPS (Counseling and Psychiatric Services) which is ironic because the whole thing we’re running on is how CAPS is a broken system.

CUI: It was a very lengthy section of the debate.

A: Yeah. We got no answers. We did eventually speak to the dean and I told him how much I care, that I did CURJ (CU’s Restorative Justice program) and he couldn’t even give me an answer. That hurt. It just shows the school is not there for students right now.

CUI: Let’s step back and think about CURJ and how it could affect future candidates and students. How do you feel about CURJ? Do you think it’s a fair system?

A: There should definitely be some restructuring. The school needs to communicate with students, which is something they are not doing in my perspective. And I think ineligibility completely needs to be reworked. I think CURJ is meant to restore justice and help teach students what they did wrong–and I did learn from that process–and I wanted to apply what I learned from my position and help other people but the school did not let that happen.

A: This whole experience was my first dabble in politics, and up until very recently I was like, “Holy smokes, maybe this is something I want to pursue later in life.” But after all this, it’s really put me off politics and shown me a different part of Boulder I haven’t seen before.

CUI: Clarify that for me. What do you mean by “a different part of Boulder?”

A: I’ve always been involved in student life, I haven’t had many encounters with the administration. But this is showing me that the administration is almost selfish. They’re thinking about money and reputation ahead of students. And the reason we’re here–the reason this whole place is here–is to educate students. Right now I feel like the school stripped me of my passion. (Editor’s Note: Election eligibility is specified in CUSG Election Code, not the school administration, drafted by CUSG and overseen by the student election commissioner.)

CUI: Going back to Instagram, along with supporters commenting #LetHimRun, Barstool Buffs, which has endorsed you, left a comment under your post saying, “Chancellor DiStefano was arrested for DUI just months before being appointed chancellor, but a student who was caught without a mask more than a year ago can’t be in a leadership role [sic] and is ineligible to run? Bit hypocritical @cuboulder.” What are your thoughts on that?

A: My thought was that it was a little bit on the edge. But also, the chancellor is someone who should believe in second chances. You know, he made a mistake–a pretty bad mistake. And yet he’s the still chancellor of our school. And that comment came from Barstool, not us. They did endorse us, but we don’t have that type of relationship.

CUI: Is there anything else you’d like to say to your supporters and to voters going out this week?

A: I came to Boulder to ski and to make friends. But this year I decided to do something way bigger than that. And I’ve sacrificed everything I love for this campaign, and it was all ripped away from me. At first, it was defeating and I will actually shout out my entire team, they literally lived in my house for those days after the crisis. But I’m still here. I believe in Inspire, our policies, and our people. Even though I don’t have a stake in the game, I’m still here, spending all my time out there trying to get votes. That’s how much I believe, you know? It was all taken away from me but I still dedicate myself to this because I have a passion and our team has a passion for our community. We’ve dedicated ourselves to this.

Voting closes on Friday, April 8, at 8 p.m. Students can vote on Buff Portal.