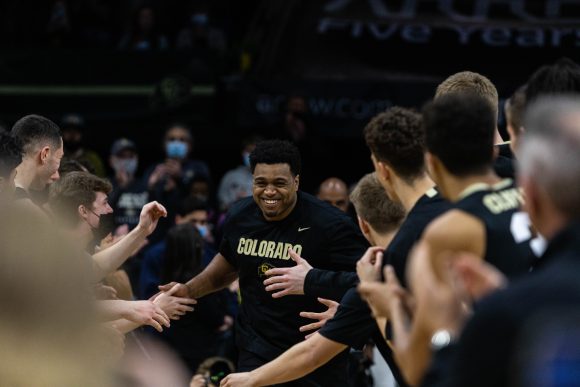 With the help of senior forward Evan Battey’s nearly perfect shooting performance, the Colorado Buffaloes defeated the Utah Utes 84-71 prior to entering the Pac-12 tournament. After an unforgettable senior night at home against Arizona last week, Colorado has now gone undefeated in their last two games of the regular season.

It seemed like it was raining in Utah as the Buffs could not miss from the perimeter. CU made a total of 14 threes, where nine of them were made in just the first half. As Colorado entered halftime leading 50-29, Battey and sophomore forward Jabari Walker combined for 32 points as the two teams entered their locker rooms. As Head Coach Tad Boyle reached his 20th win for the fourth consecutive season (2019-2022), he mentioned how this is the first time in over 50 season that CU achieved a winning record in away games.

“A good win for us,” Boyle said. “We could have let down, but we didn’t. This is the first time in 53 years a Colorado team has had a winning record on the road. I challenged them with that and they rose to the challenge.”

Usually the guards are sharpshooters and the forwards are defensive playmakers in the sport of basketball, but Colorado flipped the script as the big men of Battey and Walker combined for nine of the 14 three-point field goals made. Battey ended the day with 27 points while Walker contributed his team-high 16th double-double this season with his 22 points and 12 rebounds in this contest. The Buffaloes also out-rebounded the Utes 36-30 and produced eight more assists than Utah (18-10).

Boyle, a defensive-minded coach, noted the team’s positive and negative defensive efforts as they kept Utah to less than 30 points at halftime.

“We really guarded in the first half,” Boyle said. “We took our defensive assignments and really locked in. (In the second half) we got a little soft offensively and defensively,” he said. “This young team has to learn from that.”

Walker explained how the energy of the team played a key role in this matchup.

“We started with energy on defense and then the shots started falling,” Walker said. “We’re playing for each other more.”

“He did a great job tonight,” Boyle said. “He made a lot of great basketball plays.”

The Colorado Buffaloes will enter the Pac-12 tournament as the fourth seed in the conference, which grants them a first-round bye. The Buffs will play the winner of the game between the fifth seed Oregon Ducks and the twelfth seed Oregon State Beavers game that occurs on Wednesday, March 9th. Either Oregon team will play CU in the quarterfinals on Thursday, March 10 at 3:30 MST at the T-Mobile Arena in Las Vegas, Nev.