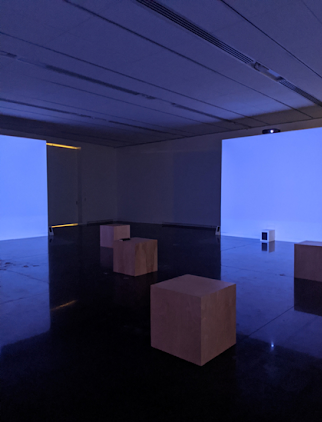 Photo of the “To Hear the Earth Before the End of the World” exhibit. (Photo by Jazmyne Bernal)

On Feb. 3, the University of Colorado Boulder’s Art Museum debuted “To Hear the Earth Before the End of the World,”  a light and sound installation.

Starting on Feb. 15, the museum began a weekly rotation of the elements with aether, which played on repeat during the duration of the museum’s operational hours.

The installation consists of a ring of four walls with lights and speakers playing a composition of the field recordings Hamilton collected from around the world.  Each wall plays its own composition. Together they create a narrative for whichever element is currently on display. In the middle of the ring,  are five seats arranged so that visitors can decide how they want to experience the installation. For instance, if a visitor wants to experience all four compositions at once, all they would need to do is sit in the seat placed in the very middle of the ring. The arrangement allows for an almost entirely subjective experience for each audience member.

Hamilton recommends that visitors try and spend as much time as they can on each element’s installation.

“You have to give it(…)enough time to really start to hear what’s happening,” he said. “It’s a composition, not just sound art. It has a narrative art(…)this piece favors the patient and it favors those who are willing to go in and experience.”

“It’s just a cool opportunity to have internal reflection,” Lauren Nagel, a sophomore at CU and employee of the museum, said. “You can just lose yourself in the sound of all of it and I think it’s such a cool thing that it changes.”

With each of the elements taking around two hours to complete their narrative arcs, Hamilton understands that the runtime might deter people from going to see the installation.

“If you’re not willing to give the piece patience and aren’t willing to bring your imagination into it, then it probably wouldn’t be something that you would dig too much,” Hamilton said.

Hamilton said that there were many overlapping things that he used to draw inspiration for “To Hear the Earth Before the End of the World.”

“(Its) inspiration is pretty nebulous,” he said. “I don’t want to be reductive by saying, you know, (it’s just) one or two things.”

Some of the aspects he mentioned as inspiration included: his interest in origin mythology, his traveling experiences and the changing globe.

“To Hear the Earth Before the End of the World” will stay at the CU Art Museum until July 16, 2022 and will continue with its weekly rotation until July 5, at which point it will begin a daily rotation.