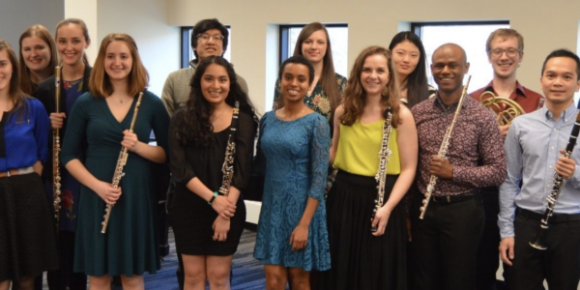 Performers from “Persevering Legacy” in 2018 (Courtesy of CU Presents)

In the classical music world, there is a significant underrepresentation of female composers and their works. In 2020 and 2021, only 5% of works performed by the top orchestras worldwide were by women, according to a new study by the DONNE Foundation.  Now, a group of CU musicians are setting out to combat this issue.

At 7:30 p.m. on Wednesday, Feb. 9 and 16 at the Imig Music Building, The Diverse Musicians Alliance, a student-led branch of the CU LEAD Alliance will bring awareness to these composers and their legacies with two concerts featuring all-female programs. To combat this issue of underrepresentation, DiMA has created an annual concert, “Persevering Legacy,” to highlight works by underrepresented female composers.

“I think the most valuable and important part about this concert is that it is student-led,” said Susan Thomas, associate dean for diversity, equity and inclusion and the director of the American Music Research Center at CU Boulder. “This is the generation of musicians who have the potential to change the musical canon and normalize performing these composers’ works.”

“Persevering Legacy” is an initiative that began in 2018 as an effort to perform works from the Hellen Walker-Hill Collection, housed in the AMRC archives. Walker-Hill, a Canadian pianist and musicologist who studied with Nadia Boulanger, spent decades compiling material by Black female composers in the United States and England. Her collection includes works by over 100 women, including Florence Price, Margaret Bonds, Valerie Caspers, Rachel Eubanks and Zenobia Powell Perry.

“This concert has helped people to become aware of the collection and of Hellen Walker-Hill’s incredible work as a foundational scholar in the field of diversity in music,” Thomas said.

This year the concerts are being overseen by Doctor Alejandro Cremaschi, a professor of piano pedagogy at CU Boulder and the head of DiMA. Cremaschi has encouraged student performers to include pieces by diverse women, both past and present. Undergraduate and graduate students will be performing 90 minutes of rarely heard music, which will diversify the audience’s musical spectrums.

“My favorite part of ‘Persevering Legacy’ is getting to see the students perform and light up doing something that they love,” said Alexis McClain, the diversity and outreach coordinator for DiMA. “This gives the ability for students to do this work in an equity space which they are leading the way in. Being able to see the hard work on display and supporting that is the best part.”

Each concert includes a diverse spectrum of composers and a wide variety of instruments, from double bass to oboe to voice. The concert on Feb. 9 is evenly split between American contemporary composers, including Jenni Brandon, Jessie Montgomery, Libby Larsen and Dorothy Chang, and 20th-century composers from Europe and the U.S., including Price, Bonds, Grazyna Bacewiz and Ida Presti.

The concerts will take place on Wednesday, Feb. 9 and 16 in the Imig Music Building’s Grusin Hall and will also be live-streamed on CU Presents.