Some students and alumni call for changes to CU Alert System 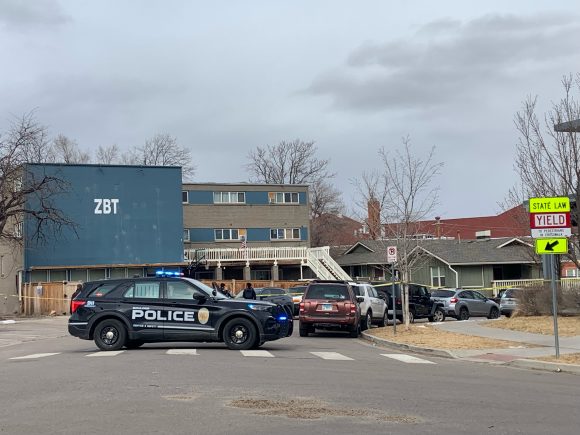 A police car parks blocks access to an apartment building during incident on the University Hill. (Feb. 1, 2022) (Henry Larson/CU Independent)

Following an incident that caused a portion of University Hill to evacuate or shelter in place on Tuesday, a petition created by University of Colorado Boulder students and alumni calls for Chancellor Philip DiStefano to step down from his position. Some students and alumni have voiced their concerns about the time it took for the university to alert community members of the situation. The petition claimed this was evidence that DiStefano was prioritizing finances over their safety.

Tuesday morning, Boulder Police arrested a 31-year-old man after he sent an 800-page manifesto to the University of California, Los Angeles’ Police Department. The University Hill Elementary school was placed on lockdown and later evacuated, alongside several university sororities and fraternities.

The Boulder Police Department tweeted that it was evacuating portions of University Hill and for people to avoid the area at 9:28 a.m. The university sent its first alert at 10:05 a.m to community members. Classes remained in session at the university.

A screenshot of the initial alert sent to students, Feb. 1.

Sophomore Caroline Jackson said she believes the university’s response was too slow.

“We just weren’t being provided any information,” she said.

DiStefano acknowledged the incident later Tuesday afternoon in a message to the CU Boulder community. DiStefano shared that the university would “review” its alert procedures in his statement.

“I understand that these incidents cause anxiety and concern in our community. For many, this is a reminder of previous events and losses we have sustained. I am grateful for law enforcement’s rapid efforts to identify and detain the suspect,” the message said.

Tuesday evening, the Boulder Police Department shared on Twitter that they did not believe there was ever threat to campus safety during the incident.

“Anyone who was hearing about stuff, let alone Colorado kids, just feel like we need the most information in order to feel safe,” Jackson said. “Being kept in the dark is a little nerve-wracking.”

Sophomore Emma White felt underinformed during the incident. White lived below the apartment of the man who was arrested. On her way to class, she said she found herself directly in front of a SWAT team member holding a weapon. White was still not fully informed of the incident until approximately an hour later when CU sent their alert.

“Safety needs to be prioritized over the reputation [of Boulder],” White said.

David Koester, a senior, said he wishes the university provided more information initially. Koester was working a shift at the Table Mesa King Soopers when a man killed 10 people there on March 22, 2021. Initially, CU’s alert on Tuesday morning led him to believe another mass shooting was happening. The lack of updates led Koester to wonder if his life was in danger or if the situation was contained. However, when he later learned there was no immediate threat, he felt more comfortable.

“They really should have, in my opinion, alerted the student body a lot sooner,” Koester said. “That’s a safety concern to individuals.”

The student body vocalizing concerns about the university’s alert system is not new. In December, a petition made by students asked the university to give alerts regarding incidents within two miles of campus. The petition came soon after gunshots were fired on the Hill on Dec. 6.

In the email, Sorensen said that information shared during events like this must be verified and disclosed by law enforcement before the university can alert students, faculty and staff. Sorensen encouraged those who live in the area to sign up for the city of Boulder, and Boulder County alerts via Everbridge.

“I think that students take it less seriously when they’re not being informed of what’s happening. That puts more people in danger,” Jackson said.