Alex Honnold highlights his expeditions at sold out Mackey Auditorium 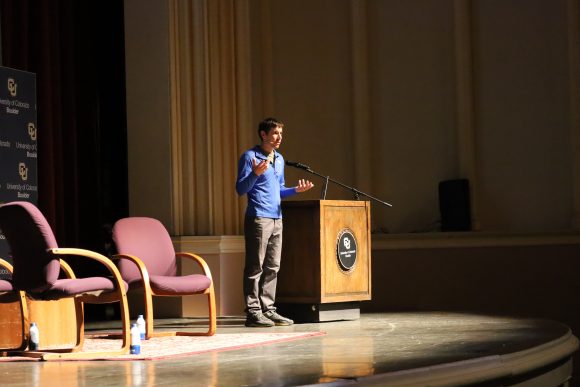 The University of Colorado Boulder welcomed rock climber Alex Honnold to the Mackey Auditorium on Nov. 1, where he spoke of his travels across the globe that led up to his historic free solo of El Capitan in Yosemite.

The event, hosted by the Distinguished Student Speakers Board, was the first event back in Mackey Auditorium since Oct. 2019, quickly becoming sold out as students, faculty and Boulder residents alike were eager to hear Honnold’s story.

On summiting El Capitan, Honnold highlighted that there’s more preparation than many wouldn’t think of, even for the most experienced climber.

“It took me six, seven years of consistent climbing, consistently pushing myself in different ways where I could actually get to the point where I thought I could actually do this project,” he said. Honnold also spoke at length about living in a van for a decade, and the benefits it had on his projects. It allowed him to be fully focused on the task at hand, being able to open the door of his van and see the variety of summits he planned to climb throughout Yosemite.

“It was hard to date out of, though,” he joked.

He describes his travels to the Ennedi Desert in Chad, Africa and how he became one of the first people to climb the rocks in the region. The rocks he climbed, however, weren’t really solid rock, but sandstone, a type of sedimentary rock that crumbles easily. He equated the rock to “a packet of sugar, where it feels solid on the outside, but if you were to poke a hole through it, all the sugar would come out.”

His trip to the Gulf of Iman in the Middle East was a welcomed change of scenery, where he lived on cattle land for three weeks and explored reefs and cliffs across the region. Here, Honnold engaged in “deep-water soloing,” a form of solo rock climbing where a climber’s only protection when falling is the water below them. With no other climbers exploring this part of the Gulf of Iman, Honnold discovered the ocean would only be 10 feet deep at times, depending on the tides.

“The beauty of this is you can free solo on terrain that you just normally wouldn’t,” he said. “It’s an interesting way to be able to push yourself…you go a little bit harder and take more risks because you know you’ll probably be okay.”

One of Honnold’s most humbling experiences was when he did an expedition to Patagonia in Southern Argentina. With climbs from camp to the mountain base spanning over six miles and walls twice as big as Yosemite, Patagonia helped to bring perspective to his sense of scale, saying “to be in such a wild landscape redefines the sense of adventure a bit.”

Through all these expeditions, Honnold explained that one day when he revisited Yosemite with a friend in 2015, he thought for the first time he could scale El Capitan without a rope.

“When I put together all the separate pieces I thought, ‘Yeah, it could be possible,’” he said.

This was around the same time that the film directors of “Free Solo” approached him. Having both a film crew and family and friends around to hold him accountable on this project gave him the motivation to complete the climb.

“[Being filmed] was incredibly embarrassing,” he said. “They filmed me for 100s of hours following me around the DMV, at the grocery store…but how am I ever going to free solo El Cap if I can’t even handle a camera on me?”

During the Q&A portion of the event, Honnold answered a variety of rapid-fire questions from both the Distinguished Student Speakers Board and the audience via Twitter. When asked about his routine before climbs, he highlights consistency, saying he goes to sleep at the same time, eats similar food throughout the week, and how important it is to minimize the stress of big climbs.

“I don’t want to psych myself up for some crazy big thing—I want it to feel like a normal day,” he said.

He also answered what type of music he listens to on his climbs—Old rock, mainly the band TOOL—And what his favorite type of rock to climb is.

“Oh definitely limestone,” he said, to the disappointment of one audience member. “It’s so varied. Granite almost feels like work. Limestone is where I have fun.”

“That’ll presumably change when the baby is born, and I’m totally fine with that…we’ll see,” he said.

For now, Honnold plans to continue his expeditions, challenging and humbling himself in new ways.

“What I love about free soloing is being this tiny dot of a person on a huge landscape,” he said. “It reminds you of your place in this huge world and in the universe.”