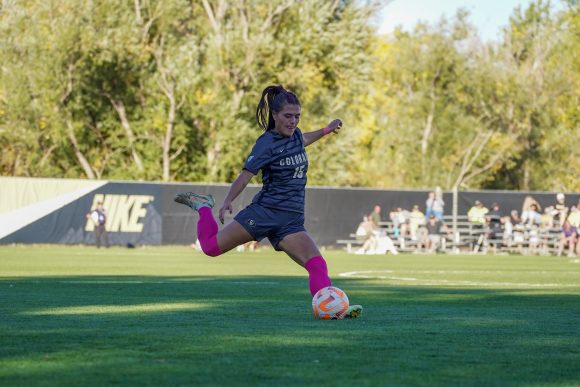 Junior Defender Lawson Willis kicks the ball into play at the game against UCLA on Thursday, Oct. 20, 2022 at Prentup Field. (Rachel Glazer/CU Independent)

Nearing the end of the regular season, the University of Colorado Boulder women’s soccer team headed to their final two away games against the University of California Berkeley, followed by Stanford. Both games ended in a loss for the Buffs, making their current overall record 8-7-4.

In Thursday’s match, the Buffs held off a goal from the Bears during the first 25 minutes of the game, using disciplined defense and aggression. CU’s tough defense was critical during their previous match against USC, but the Buffs could not keep the same rigor against Berkely.

24 minutes in, a Berkeley forward capitalized on a counter-attack, sending a pass over the heads of Colorado defenders and finding her teammate for a header goal. Five minutes later, the referee called a handball on a Buff defender inside their box, giving the Golden Bears a penalty kick.

Goalkeeper Bella Grust was able to save the initial shot, but the Buffs failed to clear the deflection, and a Berkley player took the opportunity to find another shot on the open net, making the score 2-0. Now down by two, it would be challenging for the Buffs to dig themselves out of the scoring deficit.

The first half ended 3-0 after the Golden Bears scored another goal in the 32nd minute. This attempt was just one of Berkely’s 14 shots against CU in the first half, compared to Colorado’s one shot on the Cal goal.

The Buffs came out in the second half hoping to have more chances on goal and prevent the Golden Bears from increasing their lead. However, in the 63rd minute, a scramble off of a corner kick led to another Berkely goal, with obvious frustration from the Buffs’ goalie and defenders. Now at 4-0, Colorado could hold off the Golden Bears for the rest of the match and even get one shot off in the 69th minute that the Berkley goalkeeper saved.

The game ended disappointingly for the Buffs, but they sought to learn from their mistakes in preparation for Stanford on Sunday.

Stanford, ranked #15 in the Pac-12, also gave the Buffs a tough match. However, unlike Cal, Colorado kept itself out of a large scoring deficit. There were no goals for the majority of the first half by either team, thanks to an incredible effort by Grust as she saved multiple of the Cardinal’s decent shot attempts.

Forward Shyra James and midfielder Mallory Allen also had two scoring opportunities in the first half, making the Cardinal defense work to keep them at bay. Despite this, Stanford scored from the top of the CU box with only seconds left in the first half.

Stanford didn’t score again until the 74th minute when a Cardinal forward sent a ball across the CU goal box and found her teammate for their second-game goal. The Buffs continued to battle hard on offense, but the match ended 2-0, giving CU another loss on the road. Although the Cardinals outshot the Buffs 19-6, Grust walked away with eight impressive saves that helped keep the match competitive.

The Buffs will conclude their regular season play this Friday, Nov. 4, where they will host Utah for their senior day and hope to finish with a win.