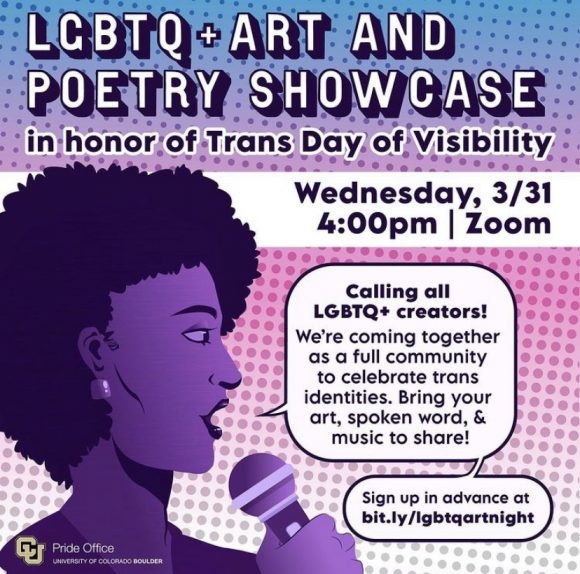 Celebration of one’s self is one of the most important parts of happiness. From birthdays to graduation ceremonies to award shows, celebration is simply a part of human nature. After all, celebration is fun. Who wouldn’t enjoy a personalized holiday with gift-giving and cake-eating?

The Pride Office at the University of Colorado Boulder wanted to use Trans Day of Visibility as a way to help trans and LGBTQ+ students at CU Boulder feel celebrated in their community, hosting an LGBTQ+ Art and Poetry Showcase on Wednesday, March 31.

This celebration of self is much easier for some than it is for others. Often overwhelmed by the hardship they face in their own communities, along with the exhaustion of simply existing in toxic environments, marginalized individuals generally don’t have as many opportunities to celebrate.

One group in particular that struggles with this problem is the transgender community. Trans people deal with transphobia, discrimination and a lack of accepting spaces all while going through the stressful process of transitioning. This gauntlet of uncomfortable situations can be exhausting.

Trans Day of Visibility was created in 2009 to combat this problem. Created by trans activist Rachel Crandall-Crocker, Trans Day of Visibility is about celebrating the community’s beauty, resilience and societal contributions — something the Pride Office achieved by focusing on trans student’s artistic endeavors.

The event, hosted by CU Boulder, was a space for students to share their art in a small-group format, with the sole purpose of being heard. No competition, awards or prizes — just a place for students to empathize with other members of the LGBTQ+ community through their art.

“When I’m sharing poetry at a Trans Day of Visibility event, it’s really about engaging in community,” said Christen Malloy, a computer science major and poet who attended the showcase. “It helps me feel like what I’m doing matters.”

Malloy’s poetry covers a diverse range of topics, from social justice to trans feminism. Like many trans people at CU Boulder, she uses Trans Day of Visibility as a way to take pride in her community without focusing on some of the problems trans folks face every day.

“It’s a day where I feel like I don’t have to hide myself away,” Malloy said. “I don’t have to play the game of ‘passing.’ It’s the kind of day that I wish every day could be for trans people.”

Friesen describes her music as having a “social justice flavor,” with much of her work exploring issues with the American judicial system. She’s also an avid writer, with her written work diving head-first into the concept of self. Friesen read her piece, “On Being a Heretic: 29 Observations,” aloud to the showcase’s attendees.

“My med provider asks me how I’ve been feeling this week in the hopes that my depression medication has improved my mood,” Friesen read. “I tell her that it’s mostly been yearning this week. Which is not the same as sadness, but close. I love to yearn; I feel it so deeply in my body, it feels so immensely me.” The piece is a brilliant look into being trans, with painfully raw descriptions of yearning for a happier life.

The Pride Office’s showcase was exactly what trans people need more of — instead of an event preaching about how trans people can fit into the cisgender-centric normality of society, it was a space for trans people to listen to each other. It was an hour of feeling empowered by trans-ness rather than being held back by it. It was about being seen, uplifted and celebrated.

To find information about future events, or if you’re interested in becoming more involved with the LGBTQ+ community at CU Boulder, visit the Pride Office’s website here.