‘Measure for Measure’: Justice and #MeToo in 17th Century Vienna 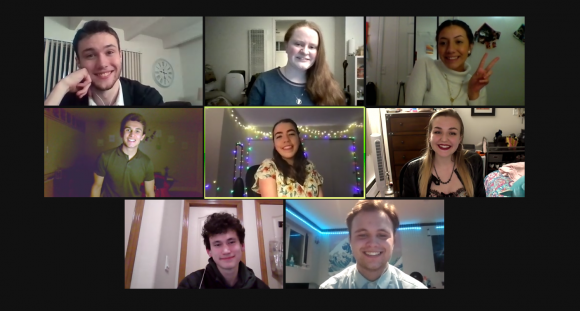 The cast of “Measure for Measure” (Courtesy of Ashlyn Barnett)

“Does power corrupt man, or does man himself corrupt the seat of power?” asked Ashlyn Barnett, the director of “Measure for Measure.”

In Shakespeare’s “Measure for Measure,” issues of justice, morality and mercy collide in 17th century Vienna when a young would-be nun, Isabella, is sexually abused by the city’s interim leader, Angelo. As Isabella fights to be believed, a powerful question emerges: will abusive men in power be brought to justice?

This semester, the University of Colorado Boulder’s Department of Theater and Dance will tackle this question in its abridged, one-act performance of “Measure for Measure,” under the direction of Barnett, a master’s degree student. The recording will premiere on CU Presents at 7:30 p.m., Friday, March 12.

“There are a lot of parallels with what we are seeing today, in terms of sexual assault and questions about justice, morality, human rights and mercy,” said Lucinda Lazo, a sophomore playing the role of Isabella.

“Measure for Measure,” one of Shakespeare’s lesser-known plays, has seen a resurgence since the rise of the #MeToo movement in 2017, which exposed sexual abuse by influential men. Angelo’s infamous line, “Who will believe thee, Isabel?”, in response to Isabella’s accusations sounds all too familiar, even 400 years after it was written.

“I have been wanting to direct it since the #MeToo movement,” Barnett said.

Barnett said she loves “Measure for Measure” because it is Shakespeare’s most equivocal play, leaving room for an open-ended exploration of justice and powerful contrasts.

“We see notions of mercy and forgiveness placed in stark contrast to unwavering, immovable justice,” Barnett said. “The character of Isabella embodies ideals of religious compassion and generosity of spirit, while Angelo stands firmly in the opposite corner.”

Yet, “Measure for Measure” is not only a somber exploration of morality. It also has lighter, comedic moments, usually instigated by Vincentio, the Duke of Vienna, played by sophomore Cameron Hazlip. Duke Vincentio, who is often compared to Iago in “Othello,” secretly interferes with the unfolding drama, though his motivations remain unclear.

Hazlip believes Duke Vincentio’s meddlesome actions can be seen as either nefarious or comedic, though Hazlip aims to strike a balance between the two extremes.

“I have tried to find an interesting middle ground, where (Duke Vincentio) does want to do good for other people,” Hazlip said. “He wants to help out (Isabella) and the kingdom, but he is doing it in a really selfish way.”

With Duke Vincentio as a quasi-puppet master, pushing Isabella and Angelo toward a haphazard resolution, they all find themselves deeper in a moral quagmire.

Which is better for society, mercy or justice? Does the concept of measure for measure, like an eye for an eye, lead to true justice? Will Isabella ever get the justice she deserves?

“No answer is provided,” Barnett said. “It is not a morality play. Each audience member must take away what they care to take (away). (They must) choose for themselves (and) answer these questions in their own lives.”

Though “Measure for Measure” has been performed countless times before, this interpretation will stand out as CU Boulder’s first ever Zoom adaptation, cut down to one act lasting 45 minutes. Due to COVID-19 restrictions, the entire rehearsal and performance process has taken place remotely, a logistical and artistic challenge for Barnett and the cast.

“I don’t think Shakespeare ever expected his work to be done in this format on Zoom,” Hazlip admitted.

During the rehearsal process, the cast has been tailoring their stage acting to Zoom, a medium they compared to film acting. Lazo said they have been doing a lot of character work and “Zoom magic,” her joking term for creative staging and prop exchanges.

For Barnett, flexibility has been vital throughout the process and has even enhanced the level of creativity and artistry.

“That’s what theater is about, adapting to whatever circumstances you are in,” Barnett said. “If there’s a barn, put up a show. Theater is about committing to the moment, whatever the moment is.”

“Measure for Measure” will be streamed on CU Present’s website here. The recording will be available from 7:30 p.m., Friday, March 12 to 11 p.m., Thursday, April 1.