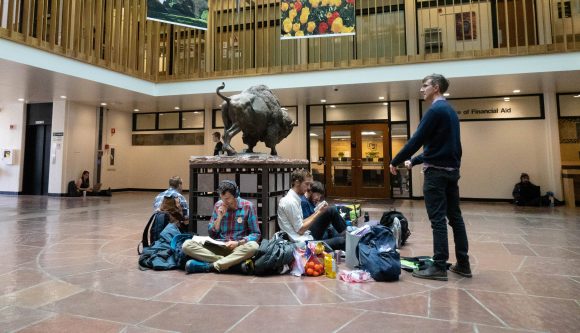 Dean of the Graduate School E. Scott Adler responded on Tuesday to demands from graduate workers to eliminate student fees. Graduate students feel that Adler failed to address their concerns in his response.

United Campus Workers Colorado (UCWC), launched a letter-writing campaign on Dec. 22, 2020, encouraging activists to email Dean Adler with the subject line, “Would you pay CU $17,380 every year just to work?”

UCWC found that, on average, graduate students return 7.9% of their salaries to the university through student fees. Using 2020 salary data, the group displays how much money administrators would contribute if they paid the same percentage of their income. Based on these calculations, President Mark Kennedy would have to pay $67,150, Chancellor Phil DiStefano would have to contribute $39,910 and Dean Adler would have to pay $17,380.

Adler responded publicly on Jan. 12 in defense of these fees.

In his response, he noted that the university has increased annual base stipends for graduate student assistants by 27.1%. Additionally, explained Adler, the university has eliminated program fees, athletic fees, student information system fees and has covered the cost of transit passes.

Graduate student Angi Harke-Hosemann emphasized that these concessions came after years of advocacy by the UCWC and its predecessor, the Committee on Rights and Compensation. The group still aims to completely eliminate fees for graduate workers.

“It is ridiculous to me,” Harke-Hosemann said. “Why would you pull from some of the lowest-paid workers in your system?”

These fees are not trivial — they come out of an already small paycheck and can be crippling to those just trying to make ends meet. For most graduate workers, this is their primary form of income. They can make an already difficult transition into graduate school even more stressful, explained Harke-Hosemann.

“Mandatory fees punish the most vulnerable graduate workers by depriving them of the ability to qualify for federal assistance, such as Medicaid and food stamps, since those services are based on gross (pre-fee) income,” said graduate student Sam Zhang in an email on behalf of UCWC.

Adler explains in his response that the existing fees provide services to enhance “academic, social, physical and mental well-being” for graduate students.

Harke-Hosemann expressed frustration that Adler continues to view graduate students as students and not as employees.

Harke-Hosemann is an NSF graduate research fellow in the Department of Astrophysical and Planetary Sciences. Like most graduate students, in addition to research obligations, she works in departmental services and as a teaching assistant for introductory courses.

But this vital funding—which, according to a 2019 report by the Graduate Student Task Force, amounts to about $3.3 million dollars—can not be easily eliminated, explained Adler.

“Those services have become more vital to student success since the onset of COVID-19. There is no easy way to simply eliminate them or to shift their funding sources without eliminating or reducing these services, particularly not in these challenging budgetary times,” Adler said in his response.

Zhang, on behalf of UCWC, suggests that these fees could be covered if only 60 of the highest-paid employees at CU contributed 7.9% of their salary.