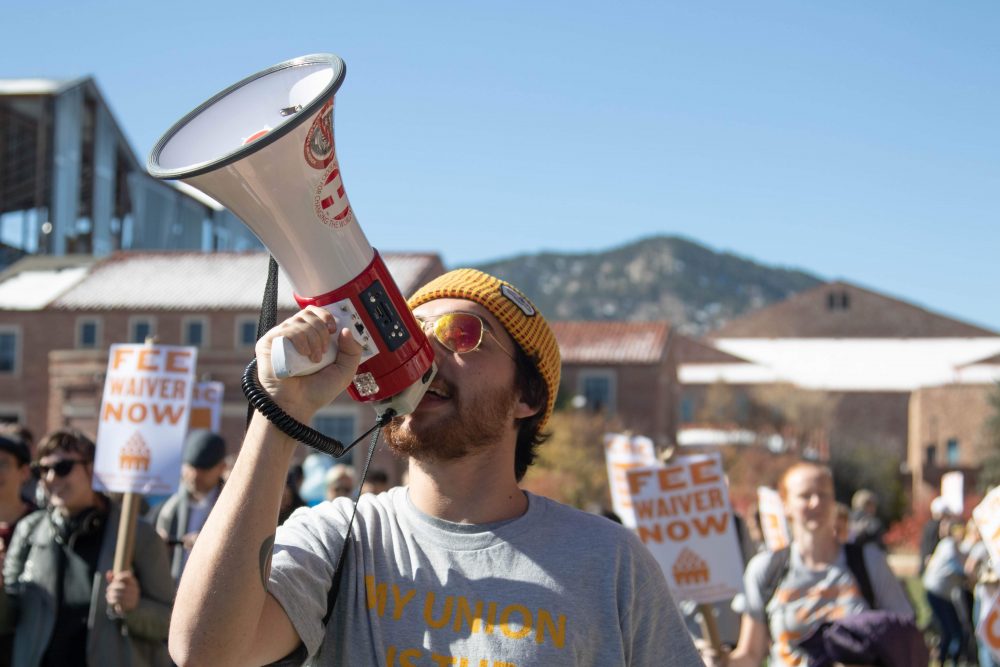 A protester yells into a megaphone as the group starts walking towards Regent Drive from Farrand Field on Oct. 25, 2019. (Kara Wagenknecht/CU Independent)

Graduate students at the University of Colorado Boulder walked out of classes Friday, ending a planned week of protest with a march on Farrand Field over mandatory fees students have to pay despite working for the university.

Graduate students at CU say that they are required to pay annual fees of about $2000 to the university for expenses such as building construction and undergraduate club funding. This is about 10 percent of the average part-time salary for many graduate students who also work at the university as teaching assistants, researchers and instructing courses.

According to CU’s website, graduate student stipends have increased “substantially” over the past four years and the university eliminated course and program fees for all students in 2018. The same year, athletic fees were taken off graduate students’ tab. But still having to pay fees to the institution many graduate students also work for feels like “salt in the wounds,” Peter Shaffery, a fifth-year graduate student, said.

There are about 5,000 graduate students at CU and their union, the Committee of Rights and Compensation (CRC), has roughly 400 members, Brand Daniels, a member, said. CRC organized the week’s protests. 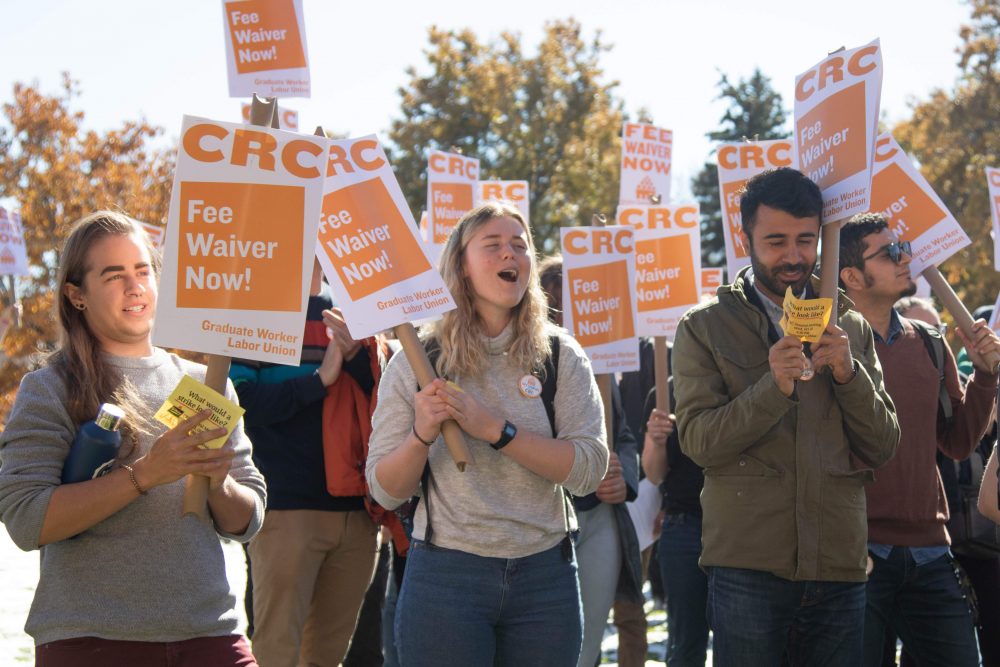 Protesters sing a chant during the end of the speeches at Farrand Field on Oct. 25, 2019. (Kara Wagenknecht/CU Independent)

“When applying to graduate schools, my number one criteria was that they had a graduate workers union,” said Hannalore Gerling-Dunsmore, a first-year graduate student. “I have seen firsthand how the administration takes advantage of student workers.”

Fifth-year graduate student Kirsten White spoke about the lack of benefits given to graduate students. She said that there is no paid sick or pregnancy leave for graduate students.  White became pregnant during her fourth year at CU and had hyperemesis gravidarum, a complication that caused her to vomit five to six times a day.

“I had a faculty member tell me not to get pregnant,” White said. “There’s no parental leave at all for workers. My partner is a faculty member and he got paid leave. I didn’t. I didn’t have insurance for three months.”

According to White, insurance is on a semester basis.

“The moment you stop teaching you lose your benefits like insurance,” she said.

White said that her biggest complaint is the gender disparity, adding that the policies implemented by CU imply that mothers are not valued at the university.

When White came back to CU after having her son, Ben, who is now eight months old, she said that she is expected to perform at the same level that she did before her pregnancy.

“People forget the hormonal attachments that mothers have to their babies after they’re born,” White said. “I’m expected to perform at the same level while breastfeeding every three hours and going to doctor’s appointments.” 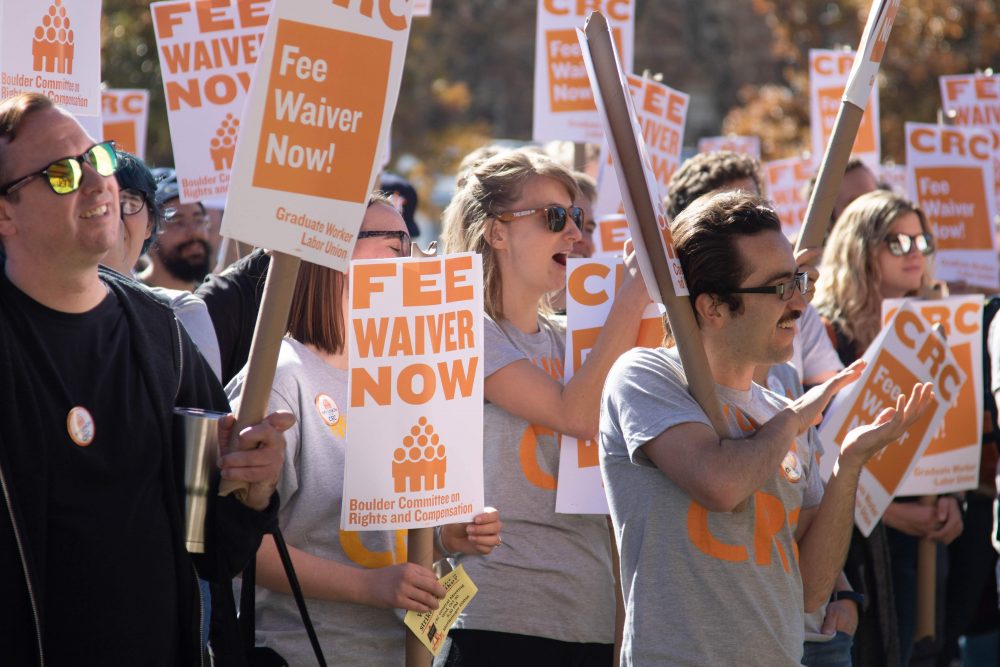 Protesters exchange a laugh before the speeches at Farrand Field on Oct. 25, 2019. (Kara Wagenknecht/CU Independent)

Shaffery said that after last year’s rally, a task force was established with representatives from the university, United Government of Graduate Students and others that recommended increasing graduate students’ stipends. He said that it’s a step forward, but it’s not enough.

Gerling-Dunsmore concluded the rally and said that graduate students will continue to demand fair pay and for all students to be treated as employees.

“We’ve had rallies, sit-ins,” Gerling-Dunsmore said. “Now we have this walkout today, and we will escalate to a strike if it comes down to that.”