“The Florida Project:” a contrast of poverty and beauty 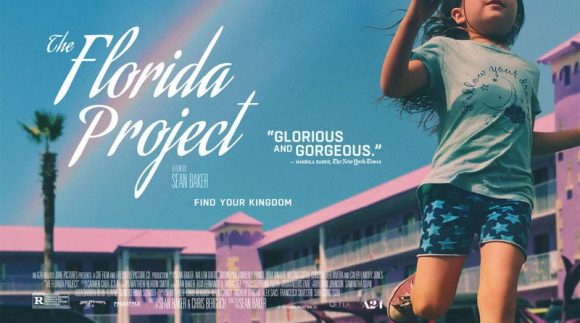 “The Florida Project” (Courtesy of A24)

Although Florida’s Disneyland seems like the perfect playland, right next door many face harsh realities. Sean Baker’s “The Florida Project,” an A24 film from 2017 recently re-released on Netflix, dives deep into the life of a young girl, Moonee (played by Brooklynn Prince in her breakout role), living in a cheap motel outside of Disneyland with her mother, Halley (played by Bria Vinaite), who struggles to stay financially afloat while raising Moonee.

The film gives viewers insight into what it is like to live in poverty as a child, through artistically inclined cinematography, personal camera angles and being unafraid to expose harsh truths. In 2020, its messages about poverty and inequality are just as relevant, especially given the state of the economy during the COVID-19 pandemic.

This film juxtaposes harsh realities with childlike innocence. Adults often have to make sacrifices for their children to thrive. Children though may not notice or understand these sacrifices until later in life. It is ironic that in the scenes where Halley is sacrificing the most (selling perfume for money or stealing Disney wristbands), Moonee is playing with dolls in the tub, a youthful, innocent pastime. Though Moonee sees Halley’s decisions, she doesn’t yet understand the significance of what is happening or why these are not normal decisions for a parent to make.

The cinematography is brilliantly done, despite being filmed on an iPhone. The camera placement, shot size and composition are all done in a way that puts the viewer in the eyes of a child.

“I have been very inspired and influenced by ‘The Little Rascals’ my entire career,” Baker said in an interview. “Most of the characters in ‘The Little Rascals’ were living in poverty, but they decided to focus on the joy of being a kid: the humor, the heart, the resilience.”

Often the camera is at eye level with the children, while they are peering over balconies or running toward different spots in the area to play. At other times, the shots show the children from a great distance. The distant, wide shots in contrast with the tiny figures of the children show a child’s perspective, allowing the audience to experience life through Moonee’s eyes. For children, the world often feels much bigger than it is. One example of this is the wide shot of Moonee and “the gang” walking past the orange store. The store is big and balloon sized, with the words “Orange World” plastered in the front in white lettering. The sky is bright blue, and the children are small, but we can see them skipping past and hear their voices as though they weren’t so small after all.

The use of color in this film is spectacular and evokes memories of childhood. The film uses lots of warm tones and bright blues. For example, there is a scene in the beginning of the movie where Moonee, Halley, and Moonee’s friend Scooty are sitting at a lilac bench and eating pancakes. They are laughing, shouting at the loud airplanes as they fly by. Halley is wearing a grape colored shirt, while Scooty wears neon lime. The grass is a bright, vibrant color, the color of a stereotypically perfect lawn. These colors, in all their loud brilliance, convey the carelessness and happiness of being a child, a striking contrast to the darker realities portrayed.

“The Florida Project” contrasts the expectations of the American dream with the realities that many poor people face in this country. By having the audience see this experience through the eyes of a child, the realities of poverty are somewhat toned down, yet they also become more potent and impactful. Overall, this film leaves the audience with a sense of empathy for the struggles of poverty, no matter what background they may come from.