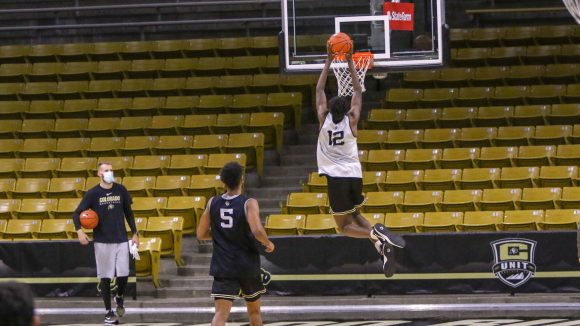 Marvel Comics might not agree, but the young freshmen of Tad Boyle’s Colorado men’s basketball team has come up with a name for themselves that sums up their talent and confidence as a group.

“We call ourselves the Fantastic Four,” said guard Nique Clifford. “We’re pretty close.” Clifford, along with fellow guard Luke O’Brien and forwards Tristan da Silva and Jabari Walker, represent the hope that the Buffs have in their 2020 recruiting class that could carry the Buffs in the years to come.

The four, with O’Brien and Clifford being in-state recruits, Walker coming out of Inglewood, California and da Silva from Munich, Germany, have had an interesting transition period because of the pandemic. They started talking to each other over social media and then continued to bond while playing Call of Duty together online, according to Walker.

“We hang out all the time,” Clifford said. “We already have chemistry off the court, so I think that will translate on the court”.

Clifford may be the most decorated of the super group. He averaged 26.3 points and 13.7 rebounds per game at The Vanguard School in Colorado Springs, winning the 2020 Gatorade High School Player of the Year right here in the Centennial State. Coming out of high school a four-star recruit according to 247Sports, “Nique” Clifford (his full first name is Dominique) chose to stay close to home and come to Boulder.

Da Silva has one of the more interesting backgrounds of the bunch. Born in Munich, his father was once a pro boxer in his homeland of Brazil and his brother, Oscar, is a senior forward at Stanford who earned all-conference honors last season. Some may remember Oscar da Silva from his unfortunate injury and the emotional moment that ensued at the CU Events Center last season.

As the COVID-19 pandemic began to make international travel difficult, da Silva was unable to have a normal in-person recruiting process and everything had to be done online for his visits before he committed to CU. He also had a tough road to physically getting to Boulder for this season, as the COVID-19 pandemic has made the already difficult task of bringing in international recruits that much harder with travel restrictions in place.

O’Brien, like Clifford, is also a highly-touted homegrown talent. Coming out of Columbine High School, O’Brien was named the 2020 Colorado 5A Player of the Year after averaging 26 points and 12 rebounds during his senior season. Despite his father Steve having walked-on for the Colorado State basketball team, and his sister currently attending CSU, O’Brien chose to cross battle lines and come over to CU Boulder.

Finally, Walker may come from the highest basketball pedigree of anyone on the entire team, let alone just the freshmen. His father Samaki played in the NBA for five teams in ten seasons and won a ring with the 2002 Los Angeles Lakers. His brother and sister, Dibaji and Sakima, are also both playing Division I basketball. Dibaji plays at the University of Massachusetts and Sakima is going into her freshman season at Rutgers University. Although he wasn’t recruited by the big boys of college hoops at first, Walker burst onto the scene with sparkling AAU seasons in spring and summer 2019, followed by a good senior season at Arizona Compass Prep in the Phoenix suburb of Chandler.

As the new basketball season approaches, Colorado’s veteran players are also nearing the end of their college days. Tyler Bey, Shane Gatling and Lucas Siewart are already gone, while guard McKinley Wright IV and guard/forward D’Shawn Schwartz are entering their senior years. This means that the Buffs will have to rely on their youth movement to sustain the high expectations while using their current upperclassmen to help develop the next generation of Buffs basketball.

Clifford has appreciated CU’s leaders during his short time in Boulder, “It’s really cool having those veterans (and) being able to learn a lot from them,” Clifford said.