What to watch and read for a spooky, socially-distanced Halloween Graphic by Anna Haynes (made with Canva)

Do you need alternatives to germy trick-or-treaters and sweaty college students at costume parties?

If you also just want to turn your brain off and watch people’s fingers get removed (which, yes, happens in more than one movie on this list), you’re in the right place. Here are some spooky movies and books so that you can stay inside and be safe—but feel unsafe—this Halloween. 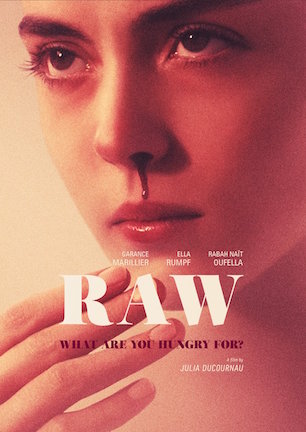 What better way to start this list off than with some old-fashioned cannibalism? “Raw” is a horror movie by French director Julia Ducournau (when it comes to horror, Europeans know how to get freaky with it). After eating meat for the first time, vegetarian first-year veterinary student Justine develops a taste for human flesh.

“Raw” doesn’t shy away from the gruesome visual imagery, but the film is also beautifully shot, donning the descriptor of “art-horror.” The movie debuted at the 2016 Cannes Film Festival and won the coveted FIPRESCI (The International Federation of Film Critics) prize. If you like to be simultaneously inspired and revolted, check this one out. “Into the Drowning Deep” takes place seven years after the ship Atargis sets sail for Marianas Trench, never to return. A second crew on the Melusine is now planning to return to the same site. Protagonist Victoria is determined to find out what happened to her sister, who disappeared with the Atargis. A hint: Terrifying, flesh-eating mermaids living deep within the trench, waiting for their next meal.

This book has encouraging representation, especially in terms of LGBTQ characters and characters with disabilities. While the diversity of character is great, the sheer number of names to remember becomes a little excessive at points. It’s a long book—the paperback approaches 500 pages—but the wide range of differing points of view keeps it intriguing throughout.

“Into the Drowning Deep” is available on Amazon Kindle for $9.99. “Midsommar,” directed by Ari Aster, will make you gasp in terror.

When Dani tags along with her boyfriend and his friends on a trip to Sweden, a rural town’s midsummer festival devolves into a series of terrifying pagan cult rituals, torturing Dani and her friends. It’s filmed almost entirely during the day, but “Midsommar” doesn’t need darkness to be one of the most visceral horror experiences you’ll have this Halloween.

This movie has some truly shocking gore, yes, but it also has important commentary on grief. After the initial shock, “Midsommar” is a movie that will simmer in your mind for days and weeks to come.

As a side note: If you’ve seen Aster’s previous movie “Hereditary,” you may have been especially spooked by the scene involving some serious head trauma. The head trauma in “Midsommar” makes “Hereditary” look like a papercut. If you’re ever in an Ari Aster film, wear a helmet.

“Midsommar” is available to watch for free on Amazon Prime Video. “Clown in a Cornfield” by Adam Cesare has a pretty self-explanatory title. 17-year-old Quinn has just moved to Kettle Springs, a run-down town with a beloved clown mascot named Frendo. A fun night with Quinn’s new friends quickly devolves into a struggle for survival as Frendo becomes less than friendly.

Cesare develops his teenage characters surprisingly well for the slasher genre, though he would argue that slashers can provide more depth than they’re often given credit for. When we gain insight into a character’s personality and motivations, it packs just a little more punch when they’re decapitated with a circular saw.

If you’re a horror fan wanting a break from the very real suffering that is all too present in 2020, Cesare’s lively descriptions of clowns shooting arrows through teenagers’ heads may be exactly what you need.

“Clown in a Cornfield” is available on Amazon Kindle for $9.99. “You’re Next” follows a family struggling to survive when a group of attackers invades their home during a tense family reunion. The movie is a mix of creatively gory moments, black humor and one girl’s surprising fighting skills.

“Clown in a Cornfield” author Adam Cesare recently recommended “You’re Next” in an interview, calling the movie “the best slasher of the decade, or at least one of them.” The similarities between the two are palpable—there’s a high kill count, a badass “final girl” and, strangely enough, many crossbow-related injuries in both.

If you’re sick of horror movie protagonists doing every wrong thing, or if you want a protagonist equally as terrifying as her attackers, Erin will be a breath of fresh air. This recommendation comes with a trigger warning for very graphic animal abuse.

“The Troop” by Nick Cutter follows a scoutmaster and a troop of boys, who travel to a Canadian island for a camping trip. The trip derails quickly into a “Lord of the Flies”-style fight for survival when a man carrying a deadly biological weapon stumbles onto their campsite.

If you can stomach it, “The Troop” is a wonderfully terrifying read. Similar to “Clown in a Cornfield,” “The Troop” has that 80s horror B-movie feel (teenage protagonists, creative monsters and scenes added purely for the gross-out factor), but it’s much more in the realm of Stephen King’s work. In fact, King himself called this book “old-school horror at its best.” Five people are trapped in an elevator, but one of them is the Devil, out to get the others for their various misdeeds. Will Detective Bowden and the police get them out of the elevator before it’s too late?

Yeah, “Devil” is stupidly cheesy. But it’s also wonderful. This is a high-tension thriller that will keep you on the end of your seat and have you at least semi-invested in the character, especially Detective Bowden, whose wife and son were killed in a hit-and-run years before. In all of its cheesiness, “Devil” is competent enough to make this tragedy relevant in a surprisingly clever plot twist.

“Devil” is temporarily available for free on Amazon Prime Video through a HBO subscription. If you don’t want to sit through the whole movie before then, please do yourself a favor and at least watch this iconic scene. “The Long Walk” by Stephen King (under the pseudonym Richard Bachman) is by far the oldest release on this list, but the horror of its premise alone is still palpable today. The plot focuses on 100 teenage boys competing in a race called “The Long Walk.” If a walker drops under four miles per hour for more than 30 seconds, he gets a warning. After three warnings, the walker faces terrifying consequences.

Originally published in 1979 and re-released as a part of “The Bachman Books” in 1985, “The Long Walk” is a criminally underrated King book. Alongside “The Troop,” this book has the unique ability to make readers feel physically ill.

While King can undoubtedly write horror, he often writes about women in a misogynistic way. If you’re willing to endure uncomfortable and unnecessary descriptions of female characters’ breasts, this book is worth seeing through all the way to its shocking ending. Innocent high school student Dawn discovers an alarming physical trait after being sexually assaulted and ends up using it to her benefit and to the great detriment of the men around her.

“Teeth” is more fun and darkly hilarious than it is genuinely terrifying. It captures the fun, campy energy of many mid-2000s teen movies perfectly, albeit with a little more blood. While much of horror leaves viewers depressed and traumatized, this movie will leave you feeling inspired and oddly empowered by Dawn’s character.

Yeah, if you’re a man and you’ve already seen this film before, you’ll probably want to stay away after reading it.

“Teeth” is available to watch for free on Amazon Prime Video. “House of Leaves” by Mark Danielewski, based on who you ask, is either one of the best books of all time or one of the worst. Those who read it typically find its experimental format genius or pretentious: backward text, pages with only one word, different text colors, etc. Not only that, but the plot itself can be exceedingly confusing. In its most basic terms, “House of Leaves” follows a fictional documentary about a family who discovers that their house is slightly bigger on the inside than on the outside. As the house changes, its proportions become increasingly nonsensical and mind-bending.

The remastered paperback copy is a whopping 736 pages. This book is infamously hard to get through, both due to the experimental layout and the constant overlapping of several plots.

“House of Leaves” is available to read for free with Kindle Unlimited, but given that reading this book requires rotating the book, flipping back and forth rapidly between pages and even using a mirror, you may want to pick up the paperback instead.