In an uncertain election year, “All In: The Fight For Democracy” is a must watch 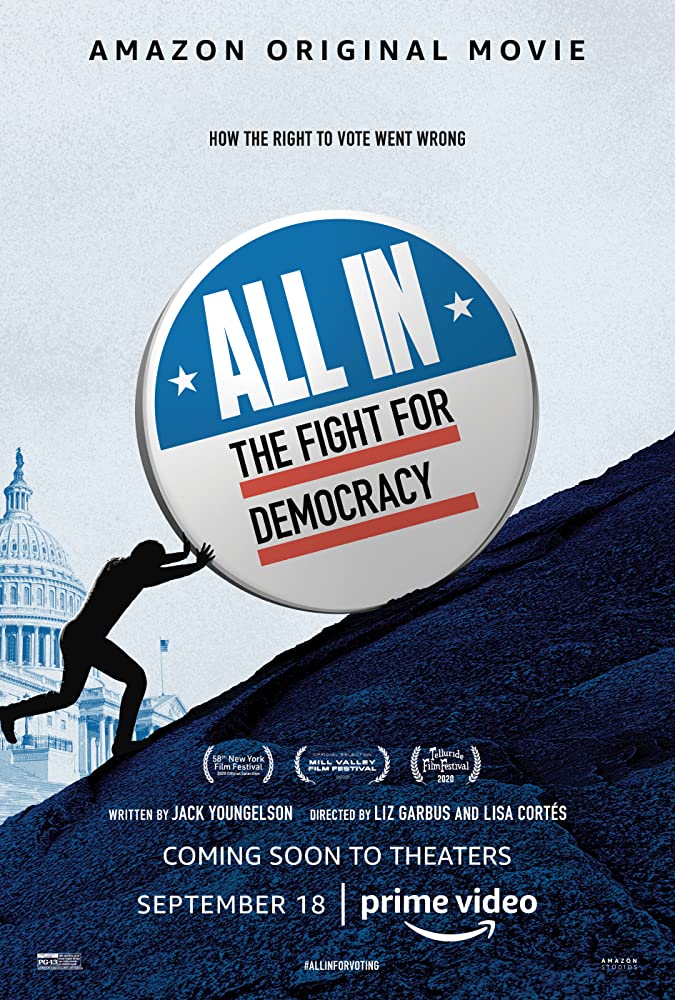 “All In: The Fight For Democracy” (Courtesy of Amazon Studios)

“I’m supposed to say nice things and accept my fate,” said Democrat Stacy Abrams, “and I will not concede because the erosion of our democracy is not right.”

Abrams spoke these fiery words onstage to hundreds of her disheartened supporters following the results of her loss in the 2018 Georgia gubernatorial race. This was an election that saw opponent Brian Kemp, then Georgia Secretary of State, place a hold on over 53,000 ballots submitted in Abrams’s name, many of them cast by people of color.

That heartbreaking loss could have spelled the end of a promising political career for some, but Abrams channeled her frustration into a new project, “All In: The Fight For Democracy.” This documentary, released September 18 was spearheaded by Abrams as producer and directed by Lisa Cortes and Liz Garbus. It sets out to expose America’s long history of voter suppression tactics, unabashedly calling out one of America’s two major political parties and why it goes against their interests to promote free and fair elections.

“They can either be more responsive to those they lead, or they can eliminate the people they have to answer to,” Abrams says in the film, alluding to powerful GOP politicians.

Indeed, the film’s release, 45 days before Election Day, can be seen as heavy-handed commentary on President Donald Trump’s electorate attitudes. This election cycle, Trump has dominated headlines with his rejection of a Democrat-led stimulus bill meant to increase funds for absentee ballots amidst the pandemic, proposing instead making it more difficult for minority voters with the closing of mailboxes and polling places, rebranding the controversial campaign as a crusade against voter fraud.

Plus in an election year marked by racial tension and police misconduct, Trump’s electoral fate could very well be sealed by how many people of color can turn out to vote.

But “All In” isn’t just a project meant to shed light on the incumbent president’s tactics, or even an opportunity for Abrams to lament the results of her 2018 campaign. Instead, the bulk of the film takes strides to educate viewers about the past, and double down on a disturbingly clear message: this isn’t anything new.

“All In” traces the history of this electorate malpractice back over 200 years, explaining how “We The People” used to only refer to the 6 percent of the population that were white, male landowners, granting them the exclusive right to cast a vote in the first vote that elected George Washington. “All In” later presents another, dismal figure, a meager 3%, referring to the percentage of the African-American population that gained the right to vote in the Jim Crow era due to poll taxes, literary tests, and harsh system for determining who lost their rights due to criminal status. A similar system never faded through the 21st century, where Black and Latinx voters were often suppressed when laws prevented rehabilitated criminals from casting ballots. This allows “All In” to tie in fittingly with “13th,” another sobering documentary that focuses on the disproportionately African-American prison population.

The strength of “All In” comes from the constant reminds that this country has failed to live up to the title of a democratic republic since its inaugural election. Though the time spent in the film on the past is overwhelming at times, it is a thorough, well-researched disruption of the age-old belief that our system is built to represent all our voices, inviting viewers to challenge or reject that notion.

However, the film is at its peak when it steps away from giving a history lesson and instead returns to the present, taking deeply personal angles that remind us that these aren’t vague, civic-textbook policies at work, they’re very real impacts on the lives of our friends and neighbors.

There are numerous scenes in the film of once-eager voters waiting outside polling locations, only to realize that their only proof of I.D. was arbitrarily rejected. Many turn away, disenfranchised, convinced after a bad experience that the effort isn’t worth it for them, or might be actively working against them. One scene shows a black voter in the South being interviewed about his confidence on the voting process.

“I haven’t seen democracy yet, so I don’t know what the hell you’re talking about,” he mutters while shying away from the camera.

“All In” takes a pretty wide lens to an even wider issue, often leaving viewers mired in a sense of despondency. However, soundbites from Trump and shots of the long lines faced during local elections during the pandemic serve to remind us that this is very much a contemporary issue worthy of addressing with determination, not resignation.

The contents of this documentary are alive and at play, and there’s a lesson to be learned here, it’s that there’s certainly work left to be done. “All In” works excellently as a rousing wake-up call for young voters to cast their ballots like it’s a chance to reclaim a true sense of democracy. Because this election, that just might be what’s at stake.

“All In: The Fight For Democracy” can be viewed for free with an Amazon Prime Membership.