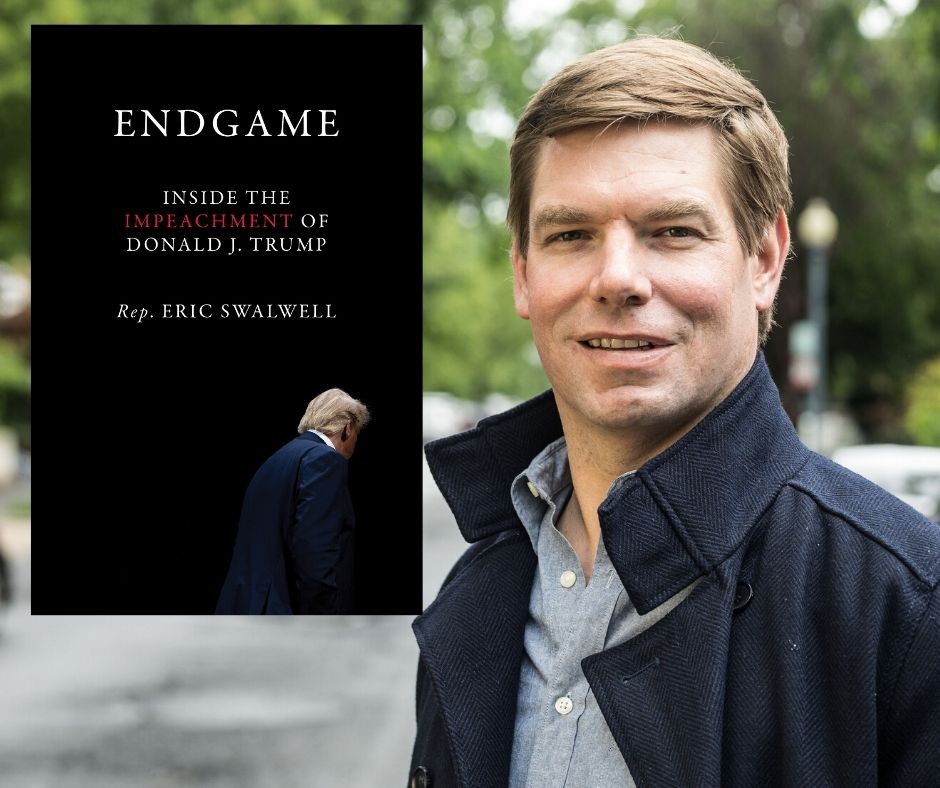 Rep. Eric Swalwell (CA-12) and his new book, “Endgame: Inside the Impeachment of Donald J. Trump” (Courtesy of the National Press Club)

Our elected officials create the laws citizens are expected to follow, but what happens when they break those laws themselves? Our system, carefully crafted to prevent tyranny, offers a powerful solution: impeachment.

Only three presidents of the United States have ever faced this lofty accusation, including the current incumbent, President Donald Trump. Despite overwhelming evidence in favor of his crimes of foreign interference, he continues to stay in the Oval Office thanks to the blind loyalty of his party, in what’s likely the most politically divided era in recent memory.

“Endgame: Inside the Impeachment of Donald J. Trump” is the work of Rep. Eric Swalwell, a Democrat who represents California’s 14th District in Congress and played a role in last year’s impeachment of the president. He’s been serving in the House of Representatives since 2013, and his latest novel is the product of his firm stance against the current administration. He recently spoke with the CUI to discuss his approach of writing “Endgame,” alongside his mixed feelings on the American impeachment process.

The book’s recounting of the impeachment process comes from a unique vantage point, as Swalwell was one of only two people in Congress who served on both the Judiciary and the Intelligence committees, giving him a first-hand look into what he described as “a pattern of corruption” from the Republican Party — a major subject of “Endgame.”

Swalwell provides first hand accounts from both major parties in Washington, many of whom testified against President Trump as he was charged with abuse of power for his solicitation of foreign interference, before eventually being acquitted of all charges. In “Endgame,” Swalwell seeks to present a dual narrative. He praises the “heroes” who came forward with evidence early on in the process, while firmly condemning the “cowardice of people who didn’t do the right thing.”

Swalwell recounts the time that a Republican colleague reportedly said, “(Trump) will have my head lopped off if I go against him.”

“They were putting their careers ahead of doing the right thing,” he said, disappointed by the blatant lack of objectivity from his peers, “so instead, they were willing to allow the wrong outcome to occur, or allow corruption to persist, because they didn’t have the temerity to do the right thing.”

Due to the loyalty-based, partisan nature of American politics, and the fact that the Senate is currently controlled by Trump’s party, Swalwell found frustration in the outcome of the impeachment, because “with so much evidence in front of them, they chose to double down and defend the president.”

“We had Republicans who wouldn’t even vote to call witnesses in the Senate. It was truly see no evil, hear no evil, speak no evil,” he told the CUI.

Despite the outcome of the impeachment, where a Republican-majority Senate acquitted Trump of charges and allowed him to continue his term, Swalwell saw virtue and purpose in the process for different reasons entirely.

“We wanted the public to understand what was at stake. And we wanted the future to see that there was a standard of conduct that was expected of presidents,” he explained, “We were mindful that our words would be interpreted by future members of Congress, and we wanted to make sure they understood why we did what we did in case they ever had to hold another corrupt president accountable.”

Alongside thoughts on the now-concluded proceedings, Swalwell urges voters to liken Trump’s behavior during the impeachment to his administration’s ongoing handling of the COVID-19 pandemic.

“The same pattern of corruption that he engaged with in the Ukraine investigation is what he is doing with the Pentagon. He’s telling his staff that governors can only receive ventilators or personal protective equipment if they praise him. So, again, it’s someone who puts his personal and political interests above the country. And that’s what’s been so frustrating with this presidency.”

While removal from office is no longer an option, Swalwell now has sights, and hope, set on Nov. 3, where Democrat Joe Biden will likely be Trump’s opponent.

“I do believe that the effort to try and cheat the election has been undermined. So, certainly I think he’s inoculated the electorate against that type of misinformation.”

Swalwell believes that the American public will not only recognize, but reject Trump’s corruption, even when presented with the choice of voting for him once again.

“There could be two endgames,” he said, alluding to the decisive move of a chess match. “One endgame could be the demolition of Trump-ism into full out autocracy in our country where the rule of law does not matter anymore. Or, it could be redemption and rebuilding of democracy. And I’m inspired to believe that the latter is what’s going to happen.”

The Boulder Book Store will host Eric Swalwell (D-CA) and Joe Neguse (D-CO) for a virtual conversation about Rep. Swalwell’s new book. The event is scheduled for 7:30 p.m. MDT on Tuesday, July 21. Information about the event can be found here.