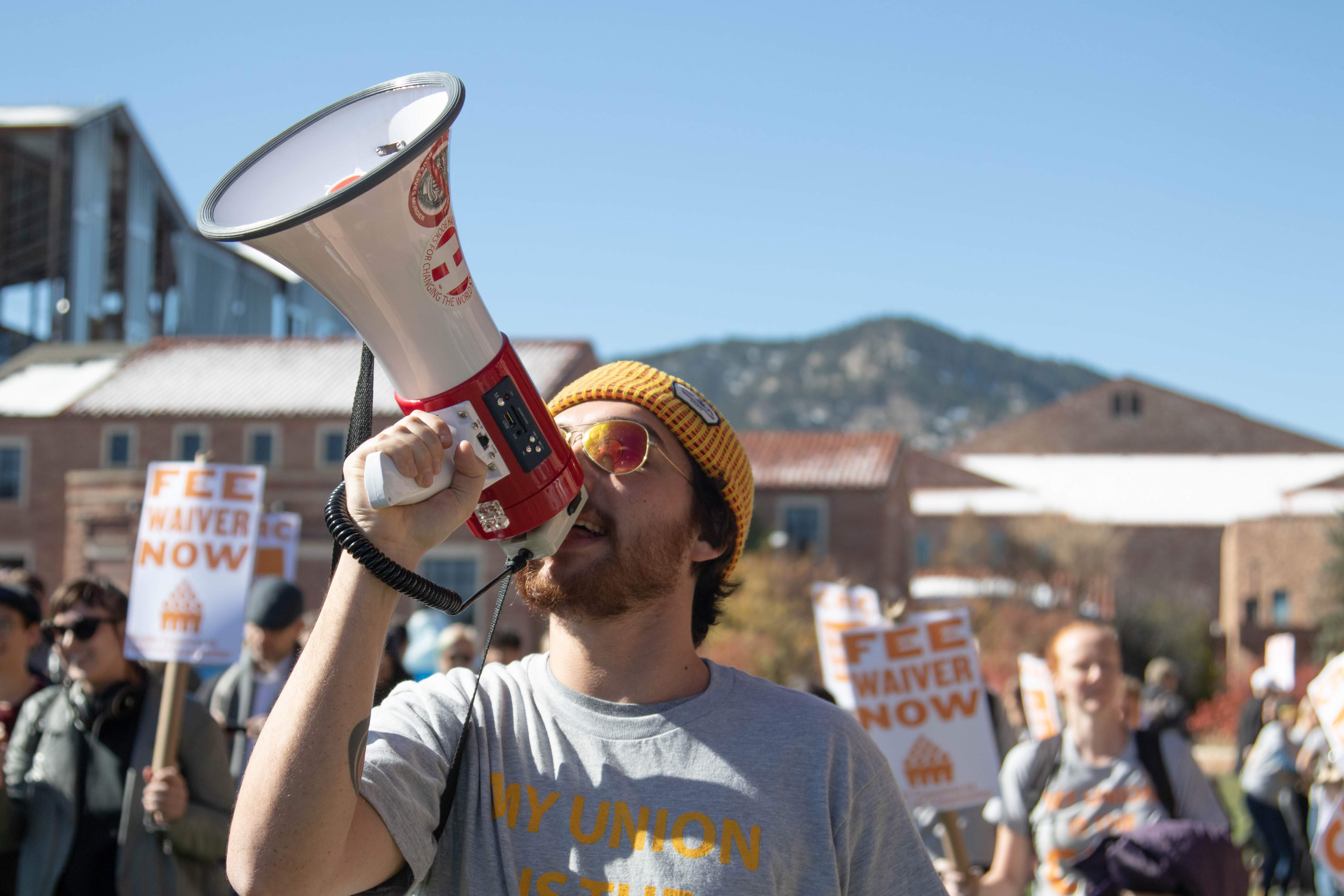 A protester for the Committee on Rights and Compensation, a CU Boulder graduate student union, yells into a megaphone during a protest on Farrand Field. Many committee members have now joined the new system-wide CU union, the United Campus Workers of Colorado. (Kara Wagenknecht/CU Independent)

The new union for the University of Colorado began its first day as a public organization by writing an open letter to CU’s Board of Regents demanding that university employees be protected as CU weathers the economic impacts of the novel coronavirus pandemic.

The United Campus Workers of Colorado, which made its public debut Monday with just over 70 official members, is asking regents to take on a number of initiatives to help save campus jobs as university funding continues to be threatened.

CU Boulder employs over 13,000 people making it Colorado’s largest employer. The union, made up of undergraduate and graduate student workers, faculty and staff, said in its open letter that thousands of job cuts will harm not just workers but the state’s economy. CU Boulder already saw its first layoffs this past week, with four employees in the Education Abroad office let go.

“We cannot cut our way out of this recession with layoffs and furloughs,” the letter reads. “Sustaining our public universities must be a pillar of our economic recovery from the COVID crisis.”

Of its many requests, the letter asks that any salary cuts made should begin at the top. It claims a 50% cut to CU system President Mark Kennedy’s salary would keep at least 15 custodians on payroll.

Kennedy and other university leaders have already said they would be taking a 10% pay deduction through furloughs. However, the president is also slated to receive a $200,000 bonus this year on top of his $650,000 annual salary, though he has pledged $50,000 of that to the creation of a new scholarship fund.

“We’re trying to get the regent’s attention and show that our demands are well supported among workers on campus,” said Angi Harke-Hosemann, a graduate worker in CU Boulder’s Department of Astrophysical and Planetary Sciences, in an interview with the CU Independent.

“We will stick together during this crisis and fight for safe working conditions,” Harke-Hosemann said.

The letter, among other things, asks that all CU employees be able to work in a safe environment where social distancing guidelines are observed. It asks for CU to guarantee all workers the right to refuse unsafe work without the threat of retaliation and to institute hazard pay for those whose jobs may involve exposure to COVID-19.

Another major demand is for international employees and graduate students to maintain employment as their ability to live in the United States is tied to their employment status.

“In the context of grad students and employees, our international population, their visas are tied to their status either as students or employees and that puts them in a particularly vulnerable situation,” Harke-Hosemann said.

The union is also asking that lower-paid workers, such as those for auxiliary services, be made a higher priority for who should keep their jobs. Kennedy has said the university system is already eyeing these services for furloughs but has not made any official announcements.

CU system spokesperson Ken McConnellogue said in a statement to the CUI that no regent had received a copy of the letter as of Tuesday.