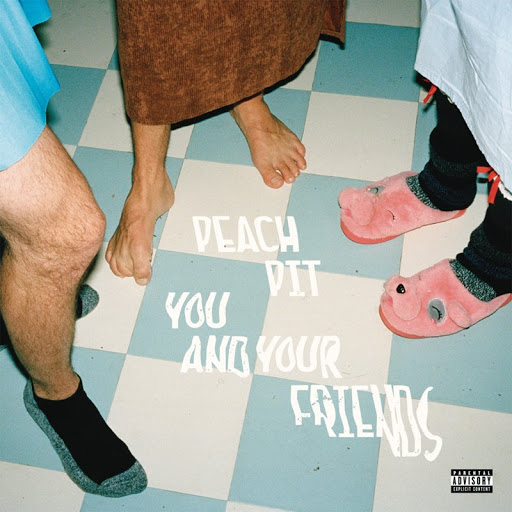 “You and Your Friends” by Peach Pit. (Courtesy Columbia Records)

In the vast sea of break up songs, all but some fall into the murky, generic depths of an oversaturated subject matter.

As they dig into the agony of heartbreak all too introspectively, they fail to truly achieve memorability, instead becoming the anthems of one-note indie darlings. Rising high above this pattern comes Peach Pit’s “You and Your Friends,” a welcome invitation to dance these trying times away with giddy, heartbreak-infused jams. On the Vancouver four-piece’s sophomore record, they forgo the veil of melancholic arrangements held by many of their indie predecessors, bringing a lighter approach to the familiar break-up album formula in one the year’s most authentic projects yet.

Known for their shoegaze-style dream pop, complete with distorted guitars and echoing vocals similar to their contemporaries in Mac Demarco or Beach Fossils, Peach Pit, a collective of former high school friends, has never been a total reinvention of indie rock. However, they’ve carved out a unique image for themselves in a genre where everything looks the same; their turtleneck sweaters, breezy lyrics and DIY attitude (as evidenced by their Instagram bio, which dubs them a “wedding cover band.”) Not quick to take anything too seriously, Peach Pit’s latest record fits the band’s aesthetic perfectly, filled to the brim with down-to-earth, yet impactful lyricism.

The album opens with the energetic “Feeling Low (F*ckboy Blues),” an up-tempo track that feels straight out of Vampire Weekend’s discography. Lead singer Neil Smith’s gentle vocals contrast well with the slamming, distorted guitars, giving the song a unique emotional edge similar to the Foo Fighter’s “Everlong.” It’s the type of composition to shout out of a car window with friends, adding to the ever-growing list of Peach Pit songs that perfect the balance between lo-fi and soul.

The album then jumps into the emotional meat and potatoes of the project, delivering song after song of insight into the spite that comes with heartbreak. It gives an honest attempt of clever metaphors to supplement the doldrums.

On “Black Licorice,” Smith likens himself to the titular confection, singing “all the people that I know / Would rather leave me in the bowl,” and on “Figure 8,” he croons “Watch her figure 8 with that style / All good things of it are most likely gonna go / Watch her skate away.” Both of these tracks remain easily danceable, with thumping basslines and crashing drums perfect for the mosh pit. Even when recounting pain, Peach Pit can’t stop themselves from having some fun with it.

Throughout the whole album, the group gives bite-sized glimpses into the inherent sadness that only comes through when you are a teenager.

On the gentle “Brian’s Movie,” Peach Pit gives a surf-rock melody that describes the cold distance felt when your best friend gets a new girl. Humming about the “sidelong view of her walking you home” over woozy guitars, the album is at its most personal yet. However, “Shampoo Bottles” provides the project’s hardest-hitting lyrics, delving into mundane reminders of an ex-partner, nostalgically detailing “Your cellphone charger’s still hanging from the wall / Haven’t chucked it all like you’d think / Though you haven’t been around in weeks.”

Keeping with the theme of beauty in the normalcy and extremes in heartbreak, the album’s title itself rings true: any of the project’s 12 tracks could be instantly relatable anthems to a group of friends, as it perfectly espouses the truths behind the bumps and the pains that come with young love. Peach Pit’s everlasting normality makes them special, especially when they wear their hearts on their sleeves this hard. After all, there’s plenty of joy to be found in the small things these days.

Peach Pit is working on re-scheduling their spring tour. Details can be found here.

Ben Berman is a senior from San Francisco, CA, and the assistant arts editor for the CU Independent. Majoring in media production and journalism, he has a passion for music and writes about trends in the Denver culture scene, covers local concerts and keeps an eye out for new music. He also writes as a freelancer around Colorado.