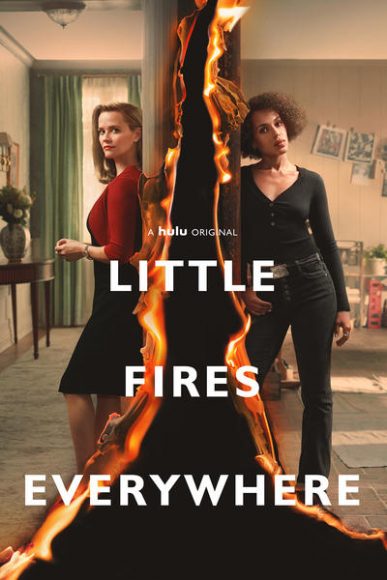 Halfway through its eight-episode season, the new Hulu mini-series “Little Fires Everywhere” strays from its source material, taking a more in-depth look at the realities of racism and classism in America today.

Based on the second novel by New York Times best-selling author Celeste Ng, the series follows the lives of the upper-class American family, the Richardsons, and the lower-income, non-traditional family, the Warrens, who moved into the Richardson’s duplex. Elena Richardson (Reese Witherspoon) and Mia Warren (Kerry Washington) must figure out how to navigate existing in the same world together.

The series creates an energized, thriller-like drama series, heightening the tension compared to the novel.

The spotlight on race completely reworks the relationships in the novel, which were solely class-based, to reflect a dynamic riddled with racism. Unlike the novel, the Warrens are depicted as a black family in the show. Further deepening the conflict in the story, it visually highlights their outsider perspective in the rich, white Shaker Heights, Ohio that the plot is set in.

In the first episode, Pearl Warren, Mia Warren’s daughter, has a run-in with the police, which was not in the book. Thus early on, the show establishes the realities of racism that the Warrens deal with regularly, realities that are completely foreign to the Richardsons.

The new racial plotline makes the series feel more disconnected from the novel, but it successfully stands on its own. The show comments on tensions and mindsets that still permeate among upper-middle-class white America. While Elena Richardson views herself as performing God’s work, she comes off as more insensitive and controlling than she does in the book. Her high-brow, classist mindset is more dangerous because of the racially motivated undertones. Elena Richardson often makes blind racist comments. She implies that her daughter’s black boyfriend and Pearl Warren “have a lot in common.”

Perhaps the most influential change to the series is Mia Warren and Elena Richardson’s relationship. The two outwardly fight with each other frequently on-screen, each struggling with the insecurities of motherhood. Mia Warren fears she will lose her daughter to the Richardsons’ stable lifestyle, while Elena Richardson constantly worries about her inability to connect with her youngest child, Izzy. This makes this show compelling, though at points difficult to watch.

The little fires made of racism and classism ignite the worlds of Shaker Heights residents. Elena Richardson continues to ignore them until Mia Warren comes in and forces her to look. The hidden, subtle attacks at the Warrens’ position in life cast a shadow of tension over everything. The series is shaping out to be as if Jordan Peele wrote “Big Little Lies,” making it almost scary in its realistic portrayal of modern-day America’s race relations.

“Little Fires Everywhere” will return Wednesday, April 1 for episode five. It can be streamed on Hulu.