The Growlers bring surf-rock joy for last show amidst cancellations 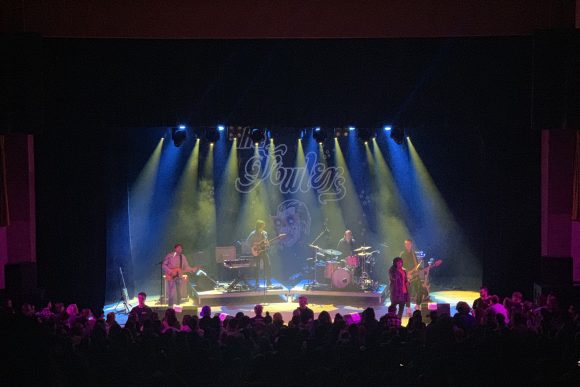 Despite the recent COVID-19 outbreak nationwide, the Boulder Theater remained lined shoulder to shoulder with attendees on Thursday night, all clamoring to see The Growlers. Through an upbeat set that dabbled in psychedelic and garage-influenced rock, the band’s performance brought a night of much-needed escapism for the Boulder community.

On the second night of two at the Boulder Theater as a part of their “Natural Affair” Tour, The Growlers’ stay in Boulder inadvertently became the last leg of their tour. However, whether the band knew it was their last show of the tour or not at the time, The Growlers brought their all.

Hailing from Dana Point, California, the five-piece band commands a uniquely laid-back stage presence that recalled their beachside roots in equal parts through their messy hair, tattered Vans and deep catalogue of mid-tempo psychedelic, surf rock anthems. After ten years of their trademark style, the band has become a cult-favorite in the indie rock scene, and their young fanbase roared as they emerged onstage.

The Growlers immediately laid down their familiar groove. Fans alternated between gently grooving to the mellow instrumentation and chanting lyrics to more upbeat fan-favorites, such as “Dope on a Rope” and “City Club.”

Lead singer Brooks Nielsen’s vocals blended well with the reverb-heavy guitars, leading the crowd in singing “I dreamt an acid rain trip / Drip drop dripped acid rain trip / All of my loneliness slipped” on “Acid Rain.” With calming, psychedelic-influenced lyrics sung amongst the intimate crowd, it was hard not to feel like everything in the world might just be alright.

Thanks to velvety smooth guitar riffs and the gentle rainbow lights on stage, attendees of the Boulder Theater were treated to a no-frills set of atmospheric rock. Despite not providing a show with high-adrenaline moments, The Growlers capitalized on their unique aesthetic, maintaining a relaxing yet engaging set throughout. Amidst a week of uncertainty in the world, it was easy to freeze time and get lost that night in the band’s cool, mellow sounds.

The remainder of The Growler’s “Natural Affair” Tour is cancelled, though they are set to resume shows across the country as soon as May. Updates can be found here.