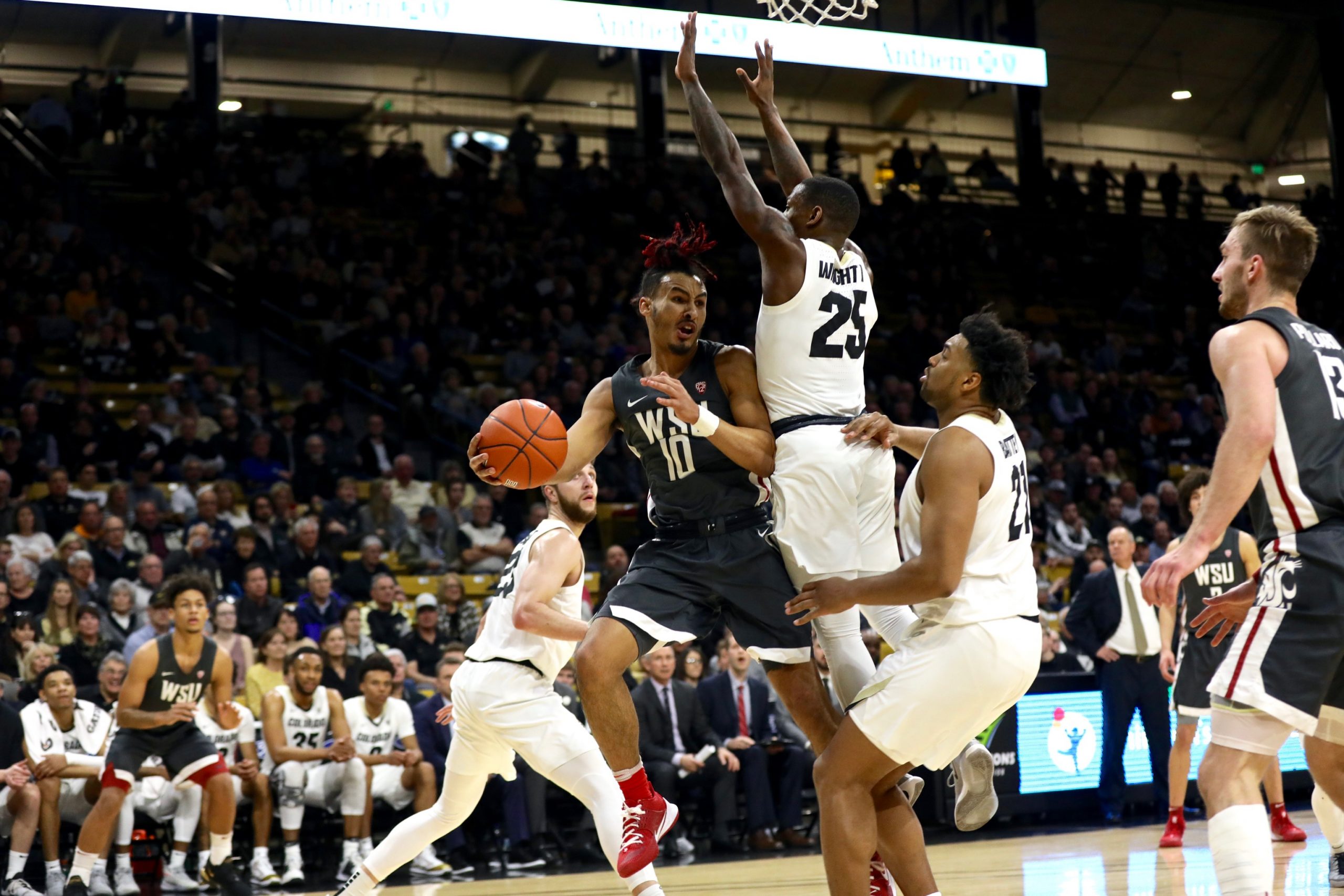 WSU junior guard Isaac Brown looks to pass the ball around McKinley Wright IV and Evan Battey during the first half of play at the CU Events Center. Jan. 23, 2020 (Nigel Amstock/CU Independent File)

Even when it has put big numbers on the scoreboard, Colorado has won with its defense. The Buffaloes will face Washington State in the first round of the Pac-12 Tournament Wednesday night and hope to bring similar defensive intensity to the Jan. 23 victory over the Cougars in Boulder. Junior guard McKinley Wright IV and junior forward Tyler Bey, both All-Pac-12 defensive team selections, will look to reestablish the Buffs’ defensive identity in Las Vegas.

“It starts with (me and Tyler),” Wright IV said. We’ve got to turn it up…we’re going to go out and showcase that we can defend at a high level and get the other guys to run with us.”

While the all-conference accolades are significant individual awards for both Bey and Wright IV, head coach Tad Boyle knows that stringing together consecutive wins in Las Vegas in order to create postseason momentum would mean a lot more to his two all-league juniors.

“I’m happy for both of them,” Boyle said. “But knowing both of those kids the way that I do, they would trade either one of those honors for a Pac-12 regular season championship, or certainly the one in Vegas.”

Whether or not shots are falling doesn’t matter to Boyle as long as his team is defending and rebounding. In Colorado’s 78-56 victory over Washington State on Jan. 23 the Buffaloes out rebounded the Cougars 45-28 — something they’ll hope to emulate Wednesday evening.

During the Buffs’ four-game skid to finish the regular season they weren’t horrible from inside the three-point line (43%), but they’ve struggled from beyond the arc (24.3%). Surprisingly, it hasn’t been the lackluster shooting that has kept the Buffaloes out of the win column over past month. Colorado held leads in two of the four losses and was outscored in the second half in all four games. It’s been second half defensive breakdowns that have doomed the Buffs during their current losing streak. Boyle emphasized the importance shot selection, on-ball defense and rebounding Monday after practice.

“We’ve some guys that I’ve tried to sit down with and say, concentrate on the things that matter, which are defending and rebounding,” Boyle said. “As a team, the last four games, we have not shot the ball well. We know that. That’s very easy to see. We haven’t won any of those four games because our defense isn’t good enough and out rebounding isn’t good enough to win those games where we’re not shooting the ball well.”

In spite of Colorado’s success relatively early in conference play against Washington State, perimeter defense especially from guards has become somewhat of a question mark now into the month of March. Even Wright IV, an all-defensive team selection, has struggled at times staying in front of the ball and not allowing penetration.

The lack of a true backup point guard hurt the Buffs this season, leaving Wright IV to carry the load on both ends of the floor night in and night out. While senior guard Shane Gatling showed flashes of elite perimeter defense after earning the starting job in non-conference play, sophomore guard Eli Parquet, who Boyle said earlier in the season was the Buffaloes’ best perimeter defender, could be a defensive x-factor for Colorado in relief of Wright IV.

Wednesday’s game against the Cougars should feature Washington State sophomore forward CJ Elleby, a first team all-league selection, against Bey, the conference’s defensive player of the year, with potentially junior guard/forward D’Shawn Schwartz spelling Bey. Boyle knows that if Colorado is unable to slow the Cougars ability in transition, keeping pace offensively may become a challenge.

“I see a team that’s really talented offensively that has a couple big time scorers in (junior guard Isaac) Bonton and (sophomore forward CJ) Elleby,” Boyle said. “They’re a team that’s very dangerous. They rely on pace of play and getting a certain number of shots up. If they’re making threes and they’re getting the ball into the lane and to the rim they’re in almost every game they play.”

The new season for the Buffaloes begins Wednesday night in T-Mobile Arena and Wright IV is excited for the challenge of playing consecutive games of high level basketball.

“It takes a lot but it’s what I live for,” Wright IV said. “I love the game of basketball. I put my heart into it, I work out outside of practices and stuff and it all comes into play.”

Recent struggles or not, Wright IV knows what Colorado is capable of and still believes his team is the best in the Pac-12.

“We still believe that we’re the best team in this conference and nothing is going to change our mind about that,” Wright IV said. “We’re happy to go out in Vegas and we’ve got a good bracket. It sets up perfect for us the way we like it, but we can’t look forward. We’ve got to go in (Tuesday), get in a good practice and shoot-around and be ready Wednesday for the Cougars.”