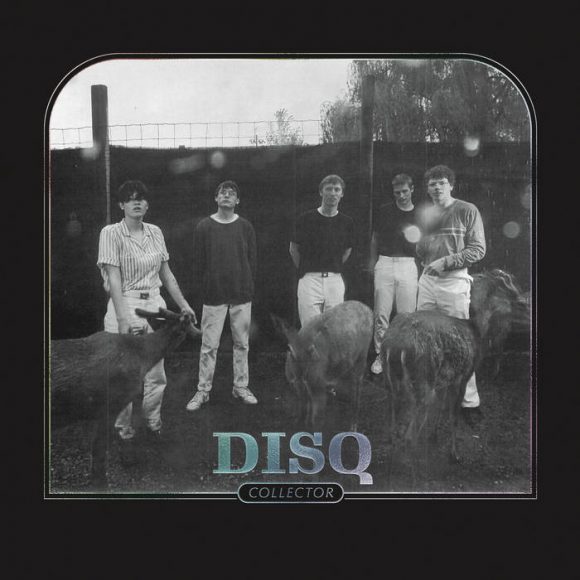 Disq, a guitar band from Madison, Wis. crafts a sound brimming with fuzz, one that often overflows into anxious noise. On their debut album, “Collector,” the band shows off their tightly wound, fiercely singular songwriting and budding professional musical talents.

The group’s story is fairly straightforward: the two original members, Raina Bock (bass, backing vocals) and Isaac deBroux-Slone (guitar, vocals), met when they were babies and have been making music together for years. The three remaining members, Brendan Manley (drums), Logan Severson (guitar, backing vocals) and Shannon Connor (guitar, keys) are the most recent additions to the group. After various gigs opening for other popular midwestern indie-rockers like Twin Peaks, Whitney and London punks Shame, Disq signed with Saddle Creek Records. Together, they have created an album that resists categorization, despite being supremely recognizable and relatable.

“Collector” opens up with “Daily Routine,” a song that distills many aspects of the band down to their core. The track begins with deBroux-Slone’s croaky isolated monotone voice shouting “This is my daily routine/Spend my hours on computer screens.” DeBroux-Slone’s vocals are eerily reminiscent of Parquet Court’s Andrew Savage if an extra level of effort and emotion were added. “Daily Routine” is driven by the interplay between noisy guitar and reckless yet steady drumming. Its lyrics illustrate a phenomenon that is likely depressingly familiar for many individuals who are the same age as the band members, being in their early ’20s, of staring at screens and generalized bedroom ennui.

Contained on “Collector” are occasional bursts of lightning rod guitar pop, like “I’m Really Trying,” as well as self-aware odes to vintage microphones, like “D19.” However, the highlights of the album are the loud and driving post-punk jams that overwhelm the listener with blasting guitar fuzz and memorable choruses, like on “Loneliness” or “Gentle.” The latter, written by Severson, builds up layers of melodic chaos and underpins them with cautiously hopeful lyrics. The music and lyrics teeter on the edge of falling apart, then end abruptly, leaving the listener broken and wanting more.

The album’s dark and direct climax comes towards the end, with the second to last song, “I Wanna Die,” in which deBroux-Slone croons the song’s title at piercing volumes. Though it might seem cliché at first, the chorus is earned with an illustrative lyrical build-up and perfectly synchronized guitar strumming that gets peppered with bursts of noise. It isn’t the most cheerful sentiment, but it is an understandable one, especially given the myriad struggles with anxiety, fear and desire that the rest of the album touches on. Sure, you might want to die, but you aren’t the only one.

There are touches of sweetness that pervade the album, enough to make it not entirely all-together bleak. This is fitting, given that it documents a part of growing up which is characterized by deathly lows and soaring highs. The albums flow reflects this unmistakable, endlessly confusing feeling that is common in newly minted adults. Disq is able to capture these emotions in a mature form on a debut that will surely catapult them into the indie-rock spotlight.

Disq will be coming to Denver’s Larimer Lounge on April 17. Tickets can be found here.