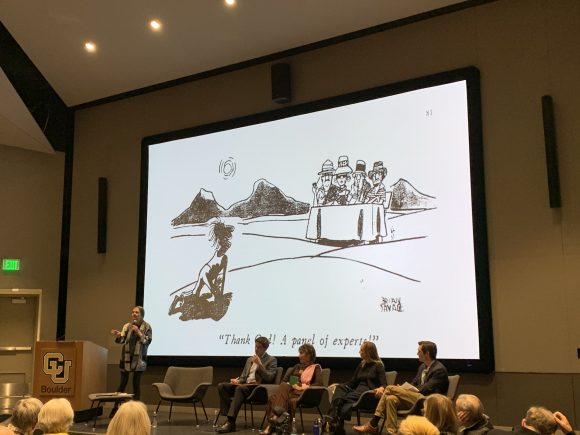 A conversation including voices that span the political spectrum concerning the climate crisis is often hard to come by, but this is exactly the conversation the University of Colorado Boulder’s Center of the American West (CAW) set out to facilitate Thursday night.

The CAW, which aims to create forums that foster a respectful exchange of ideas and beliefs, held its most recent event Thursday night in the CASE Auditorium entitled, “Why are we stuck on dealing with climate change & how do we get ‘unstuck’?”

The event featured four panelists with diverse professional backgrounds, joined together by their individual passion and expertise regarding the climate crisis. This event differed from ones in the past as it was initiated by students, particularly Dan Palken,  a CU Boulder physics graduate student and Conservative Fellow from Citizens Climate Lobby, who served as one of four panelists.

Other panelists included Claudine Schneider, a former Republican congresswoman from Rhode Island, who started the Global Warming Prevention Act of 1989, Tisha Schuller, principal of Adamantine Energy and former CEO of the Colorado Oil and Gas Association and Leaf van Boven, a CU Boulder professor of psychology and neuroscience. The talk was moderated by Patty Limerick, faculty director of the CAW.

Each speaker discussed what they believed to be the current barriers to climate progress in the United States, while offering constructive steps that can be taken, to ensure future progress.

Palken expressed his belief that the most actionable thing to overcome being ‘stuck’ on climate change is to practice democracy and engage your government.

“When I think of action in climate, I think of building up my set of skills and going into the institutions where these decisions are made and having conversations to figure out what people in power are being told by their other stakeholders,” Palken said. “I think this is the most actionable thing. Empowering people to realize that as citizens of this great country, there’s a lot we can do to engage our government, in ways that are within the system.”

Schneider championed Palken’s belief in engaging the government, but added that the only way to change someone’s mind is to first listen and understand what it is that moves a person.

“If you were to synthesize all that moves people, it pretty much falls into two categories, pleasure or pain,” Scheider said. “We have to understand the person we’re speaking to and what it is that actually moves them.”

She cautioned that responsibility also lies with each of us and we must be cognizant of our own decisions every day.

“We are in crisis management right now,” she said. “It means each of us needs to reassess what I do in my daily life and what I can do better to impact the climate.”

“We have to understand the person we’re speaking to and what it is that actually moves them.”

Schuller agreed that the most actionable thing to do in order to become ‘unstuck’ lies within each individual, and said people must stop “vilifying” language.

“If we have a problem of a global scale that requires all hands on deck, then we probably shouldn’t be spending so much of our time pointing at villains and creating an environment where it’s nearly impossible for them to come to the table,” Schuller said.

In order for people to want to come to the table, “we need to create a vision that people want to be a part of,” she continued.

Van Boven furthered this sentiment by explaining that there are people from all ends of the political spectrum that care about the climate crisis and to say that one large group is the problem is both destructive and incorrect.

He suggested that instead of telling people what to do, we should help them to be the kinds of citizens that they would like to be.

“How can we make it easier for them to be part of the solution instead of trying to convince them they’re wrong and to need to see things our way?” Van Boven said.

Limerick questioned the panelists about whether they believe we even are ‘stuck,’ to which most said yes but suggested that we don’t have to be.

“Are we fundamentally stuck? Hopefully not,” Van Boven said. “But, many of us believe that we are. Many of us treat this as a fight between people who have the right idea and the wrong idea. And these beliefs will probably just get us even more stuck.”