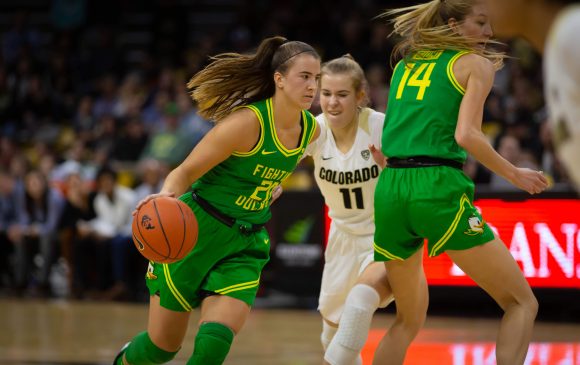 Senior guard Sabrina Ionescu has been making national headlines with 23 career triple-doubles (an all-time record for both men’s and women’s basketball). In addition, Ionescu holds the all-time record for assists in Pac-12 basketball. Oregon, behind Ionescu’s 24 points, 13 assists and 10 rebounds, dominated Colorado from start to finish. Colorado head coach JR Payne said Ionescu is a jack-of-all-trades, which makes her difficult to defend.

“She’s hard to guard because she can do everything … She’s big, strong physical guard that can shoot the three and rebound,” Payne said. “She’s tough.”

The Buffs jumped out to the first lead after junior forward Mya Hollingshed drilled a three pointer on Colorado’s first possession. However, Oregon’s size overpowered CU and the Ducks responded with an 11-0 run. Colorado couldn’t slow down the Ducks’ efficient offensive attack. Oregon held a 20-point advantage after one quarter. The Buffaloes struggled on both ends of the floor shooting a woeful 9-for-36 from the field coupled with nine turnovers. Payne’s squad had no answer for Oregon’s offense that shot 63 percent from the field and out-rebounded the Buffs by nine. Ionescu picked apart CU’s defense posting 17 points, 6 rebounds and 6 assists in the first half. Oregon led 52-22 at the break.

Oregon came out of the half firing on all cylinders scoring 14 points in the first 3 minutes of the third quarter. Ionescu continued to show why she is one of the best players in the country, tossing two full-court assists in transition. The senior from Walnut Creek, California recorded her 23rd triple-double late in the third quarter, and the Buffs were down 40 going into the final ten minutes of play with the game all but over. Ionescu did not play in the fourth quarter, but Colorado failed to take advantage and were outscored 20-13. Oregon thrashed the Buffaloes 101-53 and Colorado suffered its second consecutive blowout loss. 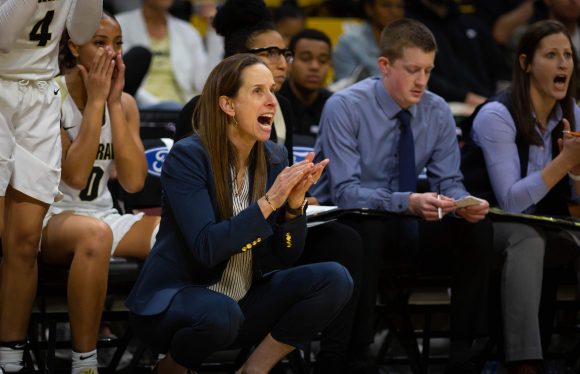 Despite the defeat, Payne said there are some positives they can take from the loss. Colorado ran good offense, but couldn’t finish at the rim, something that’s frustrating to watch as a coach.

“You know I’ve said from (the) jump I think Oregon’s the best team in America,” Payne said. “They played like it. With the exception of the first quarter I thought we competed.”

“We stayed together,” Payne continued. “We obviously competed on the glass very well. I thought we got great looks. A lot of layups, a lot of good three point shot attempts. We just didn’t knock them down.”

Colorado hopes to put this rough week behind them and grab a win when they head to Pullman to take on Washington State Friday, February 7. Payne said after a well deserved rest day, the Buffs will be ready to prepare for the two-game road trip.

“We’re already there,” Payne said. “For us this game is over. And we’re going to take a much needed day off tomorrow. Our team hasn’t had an actual day off with no classes and study hall and things in a long time.”

“So tomorrow, I told them, whatever makes you feel good, that’s what you need to do,” Payne added. “As long as it’s not hard. I want everyone to rest and get ready. We’re gonna have a great week of practice, and we’re going to play very well next weekend.”

Colorado will take on the pair of Washington schools next weekend, beginning with the Cougars of Washington State next Friday. Tip off is set for 8 p.m. MST. 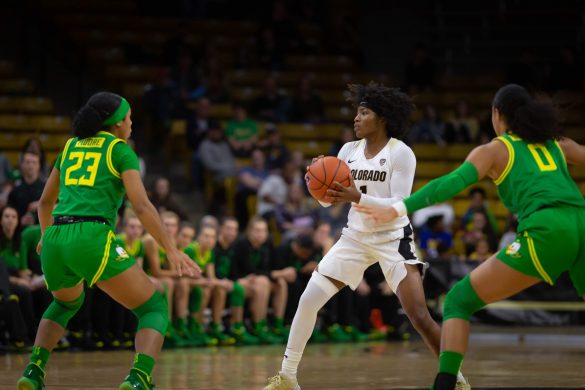 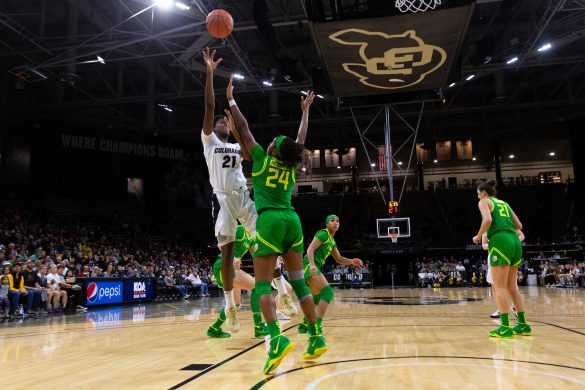 Junior guard/forward Mya Hollingshed attempts to make a basket over the defender during the game against Oregon. Feb. 1, 2020 (Kevin Wu / CU Independent) 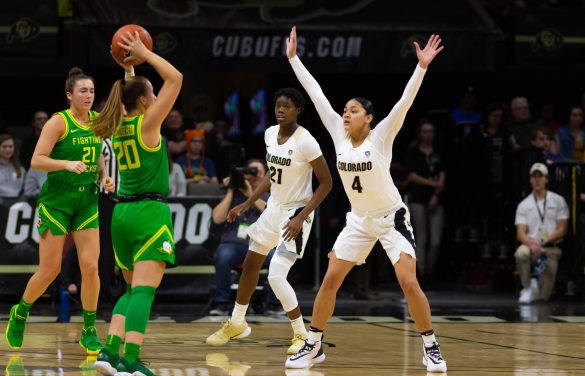 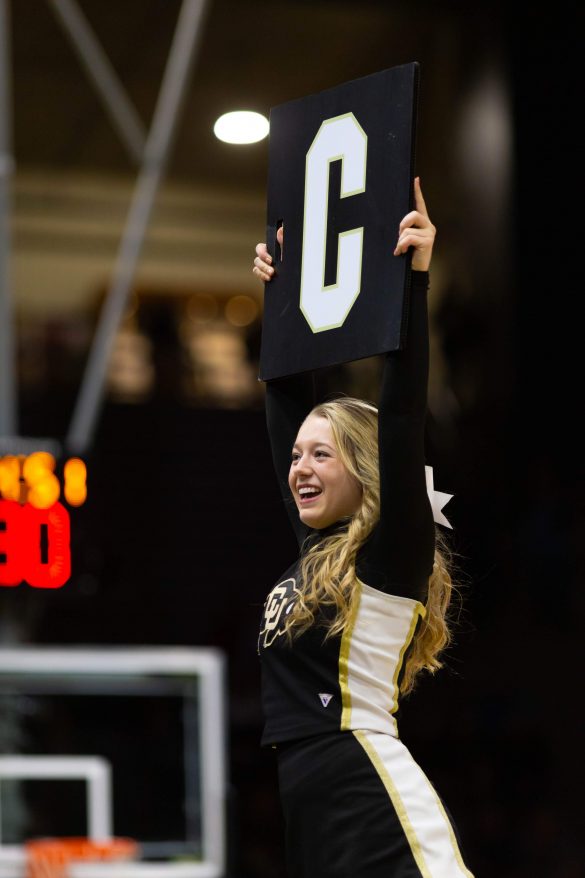 A CU cheerleader pumps up the crowd during the game against Oregon in the CU Events Center. Feb. 1, 2020 (Kevin Wu / CU Independent) 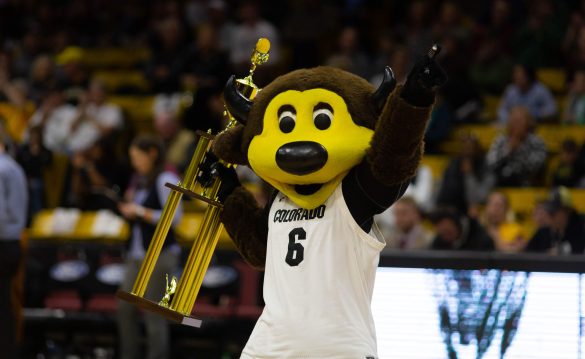 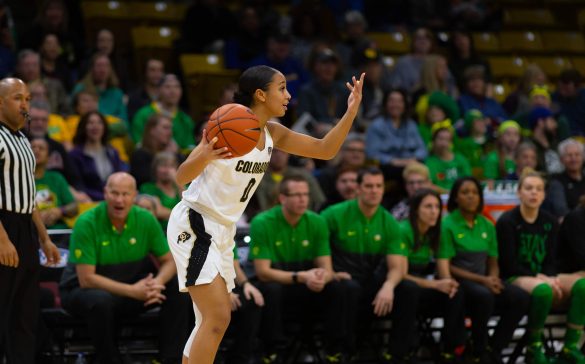 Senior guard Quinessa Caylao-Do directs traffic in an attempt to pass the ball to a teammate during the game against Oregon. Feb. 1, 2020 (Kevin Wu / CU Independent)