Inside the intricate beauty of a CU Boulder opera production 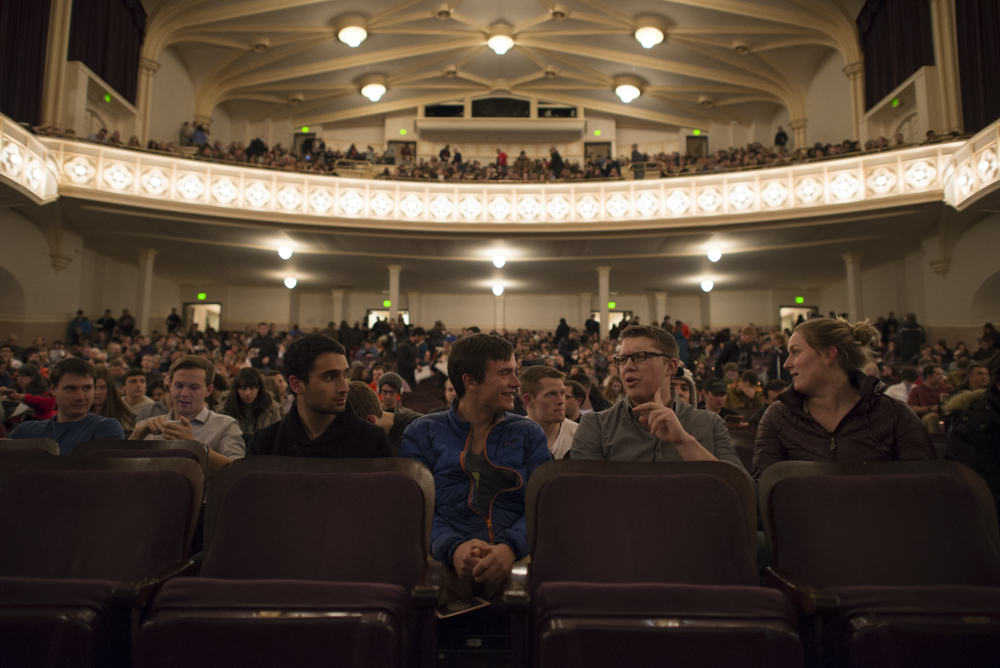 The curtain is drawn, the show’s overture can be heard resonating through the hall, establishing themes, tones, emotions. The curtain finally opens, revealing costumed performers preparing to join the orchestration with their voices.

Alone, instrumental and vocal performance possess specific talents and difficulties. When producing an opera or musical, however, the challenge of combining the two into an entirely new art form is not as easy as simply doing them at the same time.

In the experience of John McKeever, assistant conductor for the University of Colorado Boulder Eklund Opera’s 2019 production of Jake Heggie’s “It’s a Wonderful Life,” learning operatic repertoire requires its own set of skills and expectations. Presented by CU Boulder’s College of Music, ‘It’s a Wonderful Life’ ran from Nov. 15 to Nov. 17 at CU Boulder’s Macky Auditorium. McKeever said the show’s success came from a dynamic production.

“The biggest hurdle that your typical orchestra must overcome when (the musicians) work on an opera is the high level of flexibility that is necessary,” he said. “In our situation at CU, we have two casts for the shows, and they each do things a little differently. Most things will be different from performance to performance, and the musicians in the pit have to be trained to watch more closely than they normally do because only the conductor knows exactly what is going on at any given moment.”

Lack of continuity is not the only challenge an orchestra faces.

“The biggest hurdle that your typical orchestra must overcome when (the musicians) work on an opera is the high level of flexibility that is necessary.”

Though onstage roles receive cast lists before the end of the previous semester and begin to rehearse right at the start of the new one, members of the orchestra are only notified of their placement in the opera a week before jumping into rehearsals, a mere month prior to the show’s opening.

Because of this, orchestra rehearsals require heavy focus, with the goal of getting the notes correct as quickly as possible; there’s little time for discussion of the dramatics and the meaning of the plot happening on stage.

“It’s challenging to play the various parts without the context of the music,” said Portia Pray, a member of the pit orchestra for “It’s a Wonderful Life.” “Sometimes the conductor will explain what is going on during the scenes, but it is hard to truly grasp the scene until we experience it in person. We have to really try to portray a scene through our playing that we may not entirely understand yet ourselves and accompany a vocalist whose style and sound we have yet to experience.”

Entering tech rehearsals, the onstage and offstage ensembles are brought together for the “sitzprobe,” or the first rehearsal where the singers sing with the orchestra with sole attention on integrating the sound of both groups.

At this point, flexibility is vital for the cast members, who have to adjust to being accompanied by an orchestra instead of a piano.

“As a soloist, the transition can be difficult, since a pianist can follow you much more easily and make changes accordingly if you make mistakes … not so much with a full orchestra,” said Eklund Opera vocalist Helena Regan. “But that’s why a sitzprobe is so important to figure out where work needs to be done and how to configure both challenging parts.”

This change also requires an aural adjustment for the cast as they can no longer rely on what they hear.

Pianos are percussion instruments and produce a highly rhythmic sound. Orchestras have a much less rhythmically intense sound to them, so the role of the conductor becomes even more crucial.

“If the musicians on stage use their ears instead of their eyes when they start to work with the orchestra, they will be woefully lost and frequently very behind the beat,” McKeever said.  “The adjustment to trusting your eyes and, to a certain degree, ignoring what you hear is often very hard for the musicians on stage, especially for younger musicians like we have here at CU. As a conductor, all we can really do is continue to insist that everyone watch and perform with what they see instead of what they hear.”

Once all of the musical elements are woven together and run smoothly, a story emerges. The conductor is able to rely on the work done with the vocalists to communicate to the musicians in the pit how all the notes they have learned function dramatically so as to paint a narrative and its characters as artistically as it was written.

“It definitely can be exhausting trying to juggle so many factors at once,” Regan, the vocalist, said. “Once you’re actually performing (the show) … it’s worth getting to experience and share a finished product that you’re proud of.”