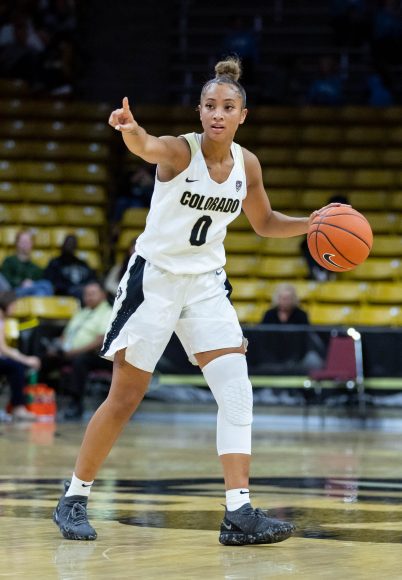 Senior guard Quinessa Caylao-Do calls out to her teammates during a game on Nov. 14, 2019 (Casey Paul/CU Independent)

The University of Colorado women’s basketball team defeated the University of Denver Pioneers by a score of 96-70 on Thursday, their last home game of 2019. Colorado improves to 9-0 on the season, while Denver falls to 5-5.

Colorado had complete control over the game, setting its own tempo early. Senior guard Quinessa Caylao-Do, the only senior on the team, broke through in terms of scoring. After having a tough offensive start to the season, the game brought her relief.

“It was good to see the ball go in the hoop,” Caylao-Do said. “I feel like it’s been a while. I have some points here and there, but I think it was just overall, like, good energy for me.”

Colorado and Denver both came out strong, vying for dominance early. The Buffs stormed to an early 13-10 lead and never looked back. Sophomore guard Emma Clarke was on fire in the first, finishing with 14 points on 5-6 shooting. Colorado would finish the first quarter up 32-23.

The second half would see Colorado take a commanding lead over the Pioneers, never letting Denver back into the game. Clarke had a career night, leading the team with 21 points while going 5-8 from the three-point line.

“We were feeling it because of it being (the) last home game of the year, so we were just really excited for the game,” Clarke said.

“It is really important,” Payne said. “We talked about it throughout the week and we are really capable of playing clean basketball. We talk about having good, clean possessions but we are still really learning.”

Colorado stays unbeaten, winning their last home game of 2019. After an upcoming trip to play a tournament in New Orleans, the Buffs will come back to open Pac-12 play in one of the countries’ toughest conferences.

“We should be feeling confident,” Payne said. “We’re just going to be excited to keep getting better and carry our success and the things we do well into league.”

The University of Colorado women’s basketball team travels to New Orleans next week where they will play the University of Alabama Birmingham on Friday, Dec. 20 at 12 p.m. MST.