Q&A: The Daily Utah Chronicle on CU vs. Utes 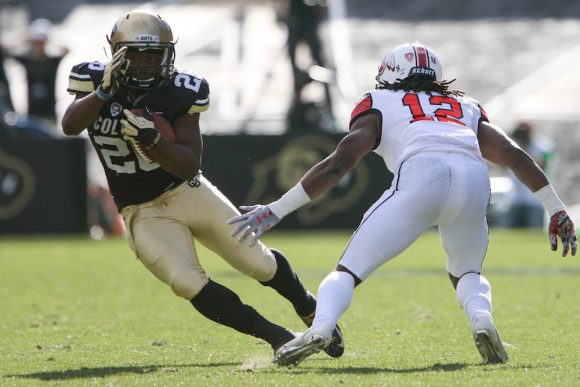 A Buffs running back jukes a Utah defender early in a game at Folsom Field. (Nigel Amstock/CU Independent file)

Sunday will see the University of Colorado football team in Utah as they attempt to take down the No. 6 Utes in both team’s final regular-season match. In the lead up to the match, the CU Independent spoke with Sammy Mora, assistant sports editor for The Daily Utah Chronicle, about this week’s matchup.

CUI: What is Utah’s defense going to have to do to shut down Laviska Shenault Jr.?

Mora: The Utah secondary is going to have to put our strongest corner, Jaylon Johnson, on Shenault. Johnson has played lights out this season and he has kept some of the best receivers in the conference to their lowest totals of the season. If Johnson plays as well as he has the last few weeks on Saturday, Shenault shouldn’t be a factor.

CUI: Are the Utah players preparing for this game differently knowing how high they are ranked?

Mora: They are preparing this week the same way they would every week. Kyle Whittingham does a fantastic job at making sure the team focuses one game at a time and the goal is always to go 1-0. Even though there is a lot on the line, this team has done a really good job of focusing on the task at hand and making sure they get the win before moving their next opponent.

CUI: What is the strongest and weakest aspect of this Utah football team in your opinion?

Mora: There are a lot of ways to answer what part of the team is the strongest but in my opinion, the strongest part is definitely the defense overall. This is by far the best defense Utah has ever seen and it shows in the way they play. The weakest, in my opinion, would have to be the punting game. Over the last few years, Utah has been blessed with some very good punters and while Ben Lennon is only a freshman, there have been some times where he hasn’t done the best. I believe if we give him some time he will be yet another great punter in Utah history.

CUI: What do you think about Utah being 28.5 point favorites in this game?

Mora: Utah’s offense knows how to score. The offense is full of playmakers and all of them know how to get the ball in the endzone. I also think that the number also shows how good this Utah defense is. They haven’t allowed a touchdown at Rice-Eccles in 14 quarters but they are also scoring. Both sides of this Utah team can score and I believe the line shows that.

CUI: How high will the energy be at Rice-Eccles Stadium for the final regular-season game?

Mora: The energy will be electric at RES this weekend. Fans know how special this team is and they want to honor them. We had numerous players come back for their senior season and they want to finish what they started last year. It might be cold in SLC this weekend but that stadium will be on fire.

Mora: I think the Utes dominate this game from beginning to end. I think the defense finally gets the shutout they have been trying to get the last few weeks. I also see one defensive touchdown for the Utes. Utah wins 42-0.

The Buffaloes and Utes are set to kick off Saturday, Nov 30. at 5:30 p.m. MST at Rice-Eccles Stadium in Utah.