Photos: Ralphie V through the years

The University of Colorado Boulder’s beloved buffalo mascot, Ralphie V, is retiring after 12 seasons and 76 appearances. Beginning her tenure in 2007, she kept a university tradition like no other alive, following in the path of her four predecessors. With her retirement, the CUI looks back at some of our favorite photos of the legendary buffalo. 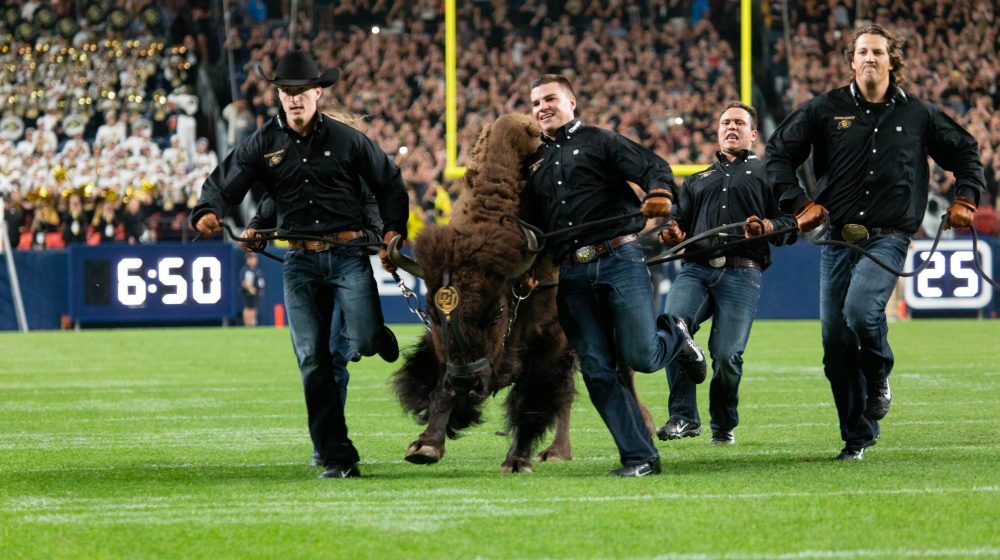 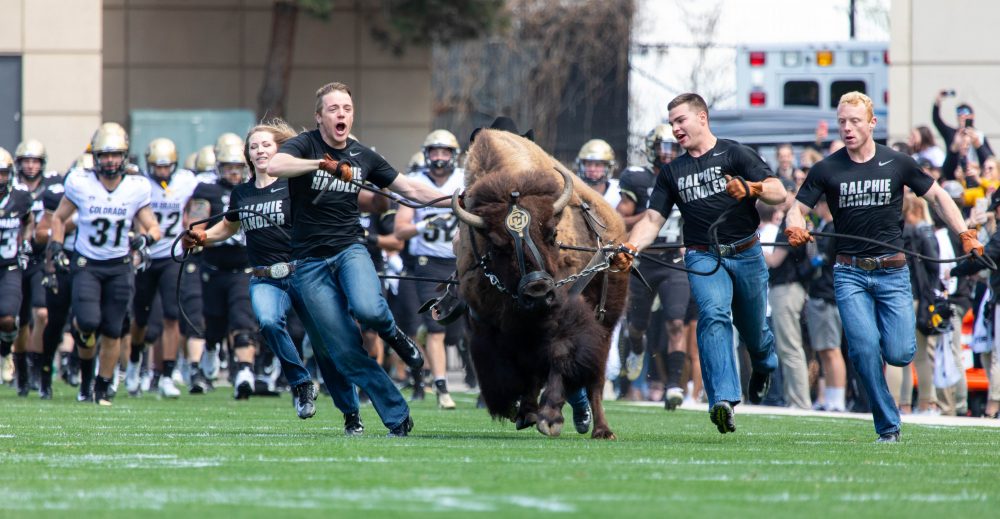 CU mascot Ralphie V runs down the field to start off the first half of the spring game. April 27, 2019 (Casey Paul/CU Independent)

Dubbed the ‘queen of campus,’ by Ralphie Program Manager John Graves, Ralphie V spent years leading the Buffs onto the field at Folsom Field and beyond. 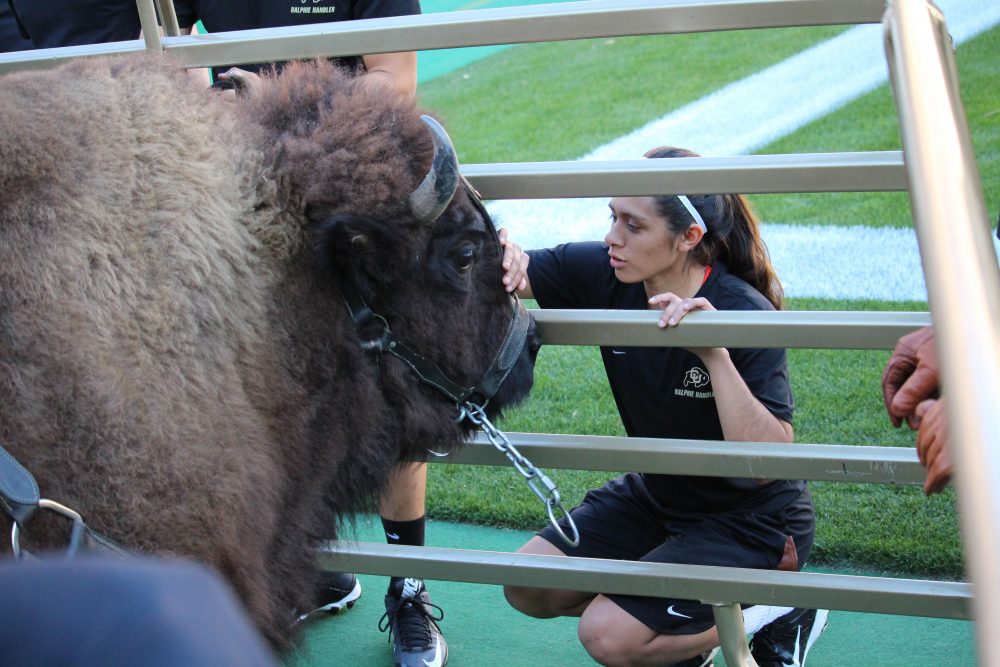 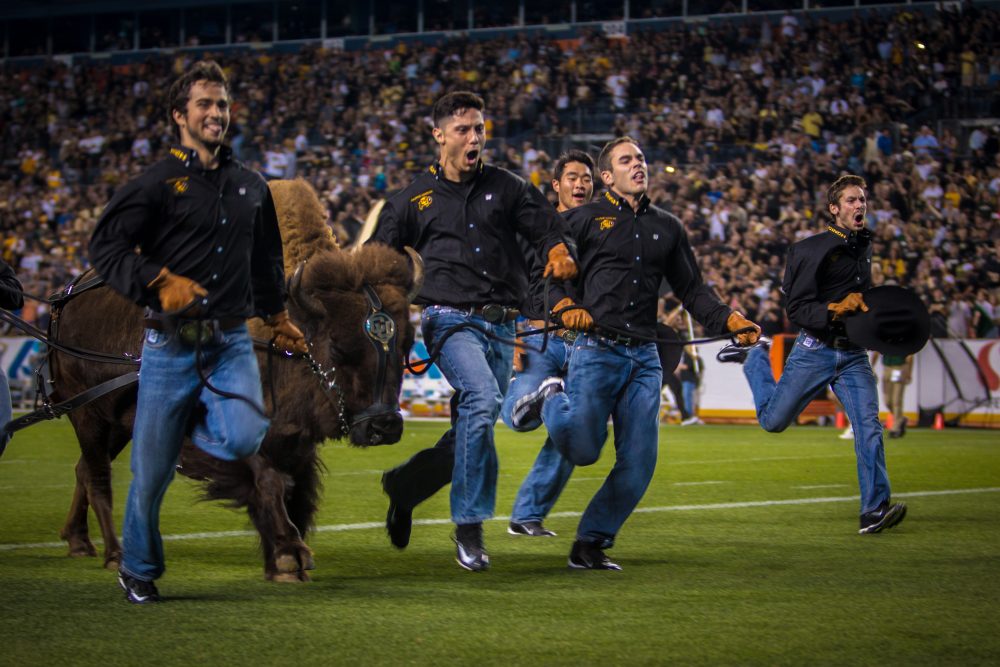 Ralphie and her handlers rush toward the end zone during the halftime of the Buffs’ 44-7 win over the CSU Rams during the Rocky Mountain Showdown at Mile High on September 2, 2016. (Robert Hylton/CU Independent_

Here handlers described her as “dynamic,” with “moods and emotions just like a person.” She can always be counted on by Buffs fans to make gameday a little more special. 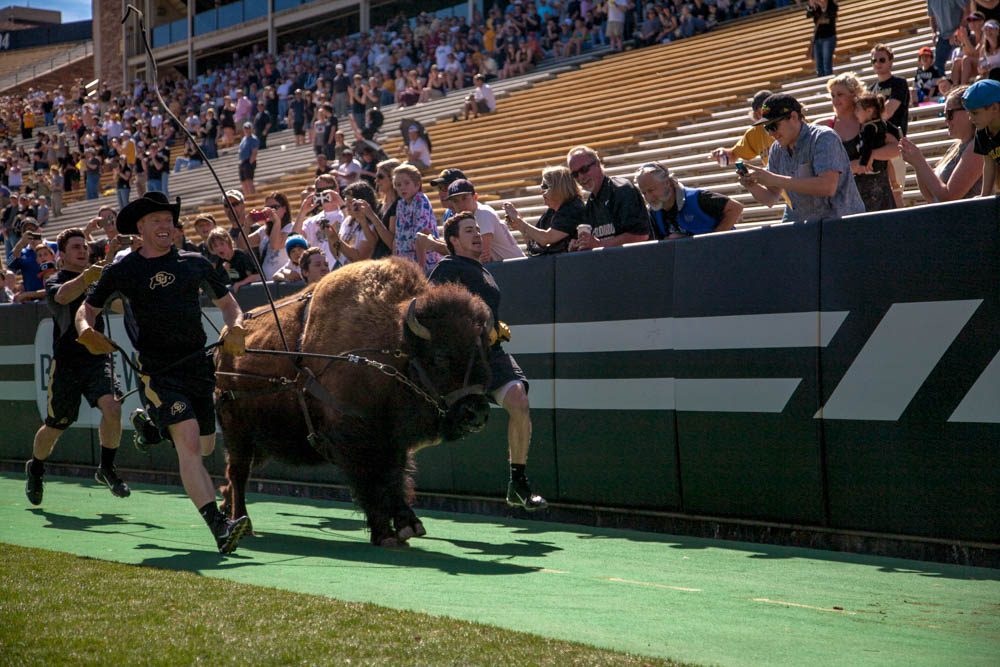 The Ralphie Runner’s doing what they do best during this year’s Spring Football Game at Folsom Field on March 15, 2015. (Robert Hylton/CU Independent) 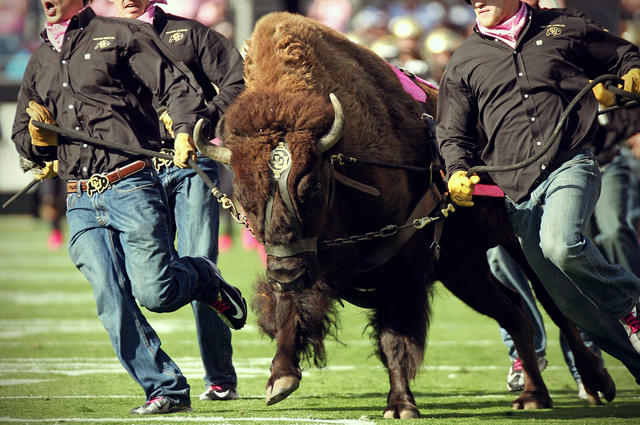 At 13-years-old, the spunky buffalo is not going into retirement sleepish. Instead, Ralphie V’s energy and speed have only increased, according to her handlers. Unable to respond well to cues, it seems the buffalo is too fast for her own runners, the reason for her retirement. 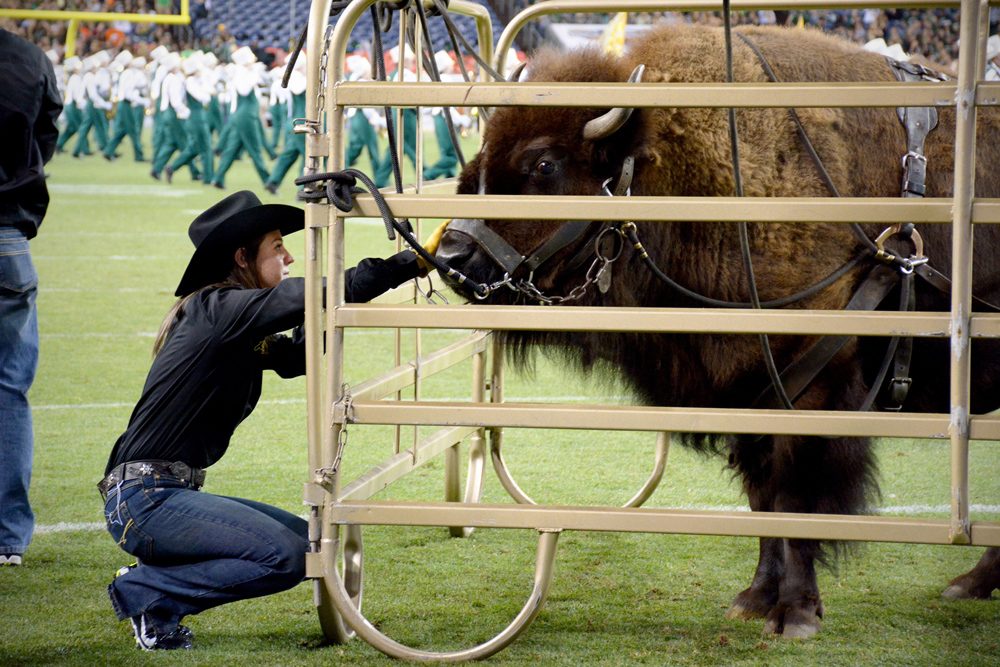 “What do you talk to Ralphie about?”
“I tell her about my day, how my classes are going. I think she really likes the sound of my voice, it keeps her calm.” 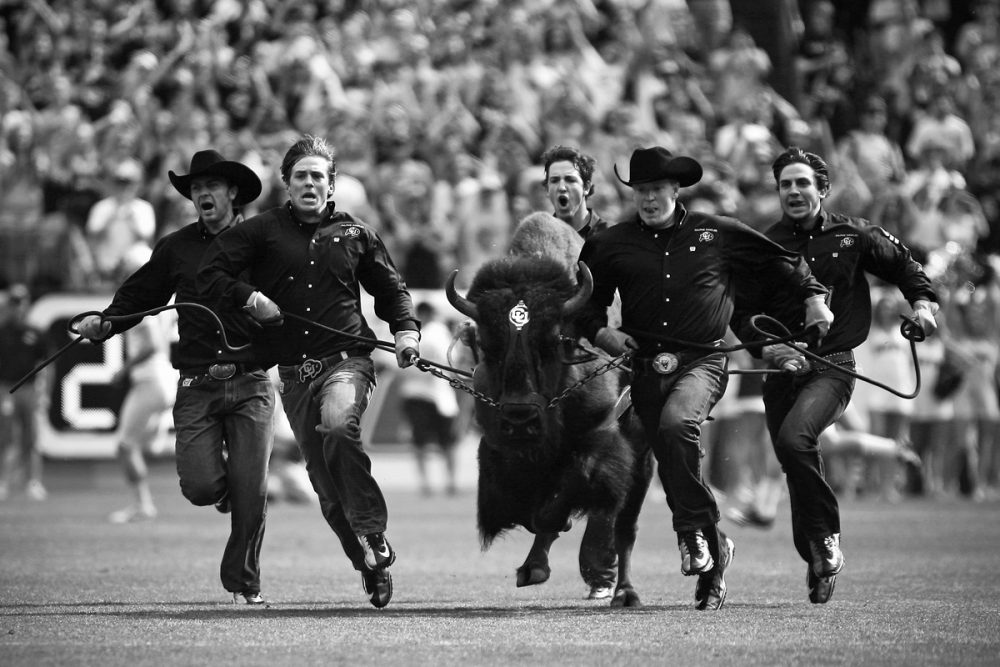 CU fans won’t have long to wait until Ralphie VI dawns the iconic CU symbol to lead the football team to victory. Graves has said that he and his program have already begun the search for her predecessor, looking for a buffalo that “wants to be around people.” 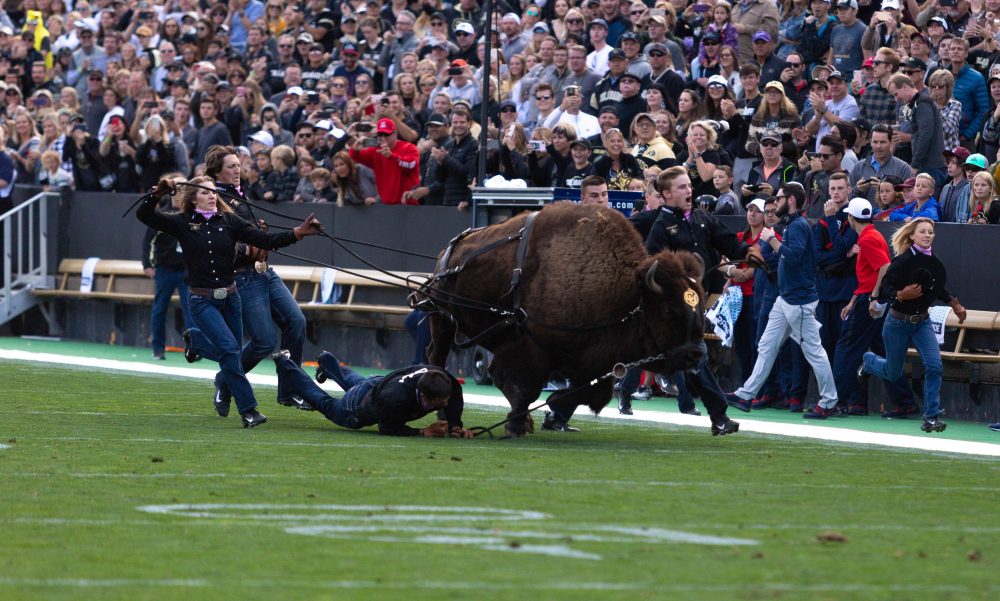 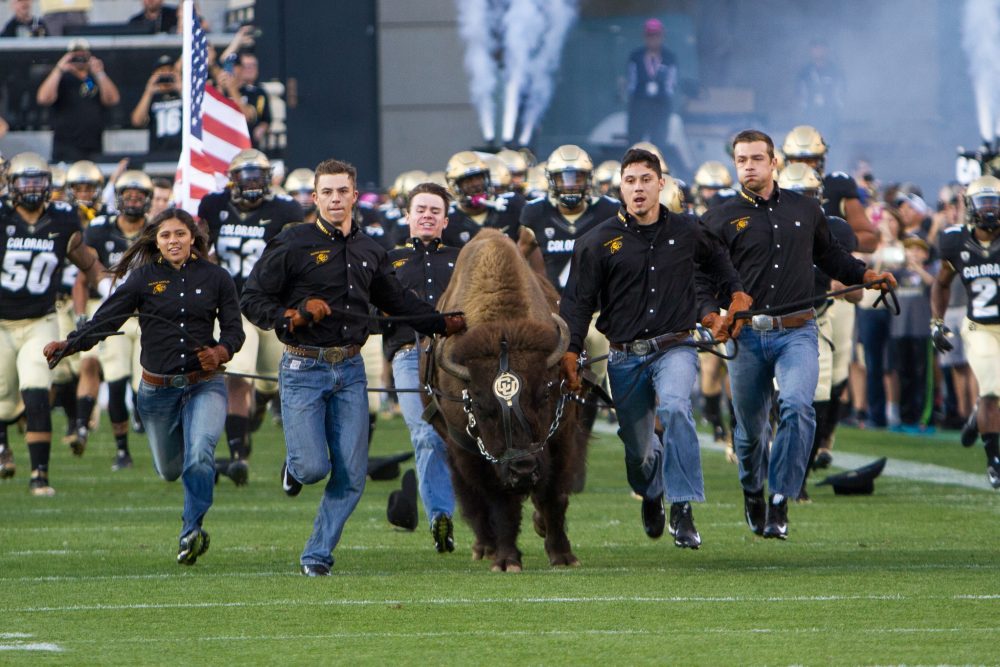 Ralphie runs across the field along for the opening during the Buff’s 40-16 win against the Arizona Sun Devils on Saturday, October 15, 2016. (Benjamin Chang/CU Independent)

For our feature story on Ralphie V, her handlers and her legacy, click here.